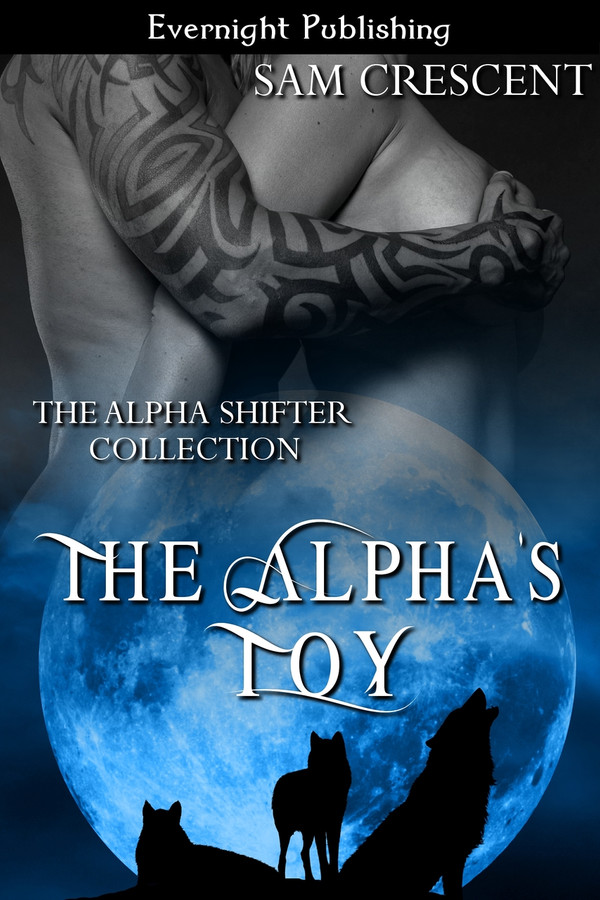 To spare an innocent she has to become his plaything.

When Zeke attacks her pack, Mary, a half-breed wolf, wants to save a young wolf, but to do so, she has to accept his bargain. She must be his toy until the next full moon. Mary despises the alpha she must now give her body to, but she can’t deny the response he inspires within her.

Exploring the deceased pack’s lair Zeke stumbles onto something that could destroy all breeds of wolf. The leaders of Mary’s pack had been experimenting on wolves. The reasons why are still unknown, but Zeke will do everything in his power to find out the truth, especially when he discovers Mary was one of their experiments.

Even before the end of the month Mary becomes all he can think about, and he’s determined to keep his toy safe. Then a twist of fate lets him know she’s more than a toy. Mary is his mate. Can he overcome her fear of him and convince her to stay when her month is up?

“Come on.” He took her hand and led her upstairs. Zeke stopped on the third floor, opening a door.

One aspect of her turning was that she was now able to see in the dark well. Jessica lay on her side, fast asleep. “She’ll be cared for.”

Nodding, she followed him upstairs. There were not many people around. “Where is everyone?”

“After a run some stay behind until the morning. Others leave after a run. This is not a prison, Mary. This house is for my pack to run and be free.”

Not saying anything she walked into his bedroom, which was dominated by a square bed at the far wall. She saw the four posts surrounded it and what had her gasping were the silk ties wrapped around each post. Mary had watched enough bondage videos to know what they were.

Turning around, she jumped as the door shut and locked.

“Take your clothes off,” Zeke said. He was leaning against the door. She watched him pocket the key. “You’re my toy, Mary. I think I’ve been very nice, and now I want payment.”

He took a step into the room.

She moved back as he advanced toward her. There was nowhere for her to run. Facing him, Mary knew this was what she signed up for.

Think about the need. The burning fire and the ache you’ve been having. Give in.

For one month she could be his toy, and she’d be able to walk away.

Tugging on the damp shirt, she pulled it over her head. Her thick stomach embarrassed her, and she covered her hand over it. Shit, how could she do this? He was a Greek god while she was a tubby half breed.

Moving forward Zeke grabbed her hands, pushing them out of the way. He wasn’t going to give her chance to hide from him. All night he’d been holding this off, but he could wait no longer. She was his, and he intended to take full advantage of her body. Women were too slender in the packs he’d visited. He screwed them even though he found little to no satisfaction with them.

Mary was all woman. Her curves were driving him crazy, and knowing the scent of innocence had nothing to do with her being a virgin, Zeke couldn’t wait to slam inside her.

“You will not cover yourself up. I want to see every part of you.” He lifted her face up to see him with a finger underneath her chin. “Do you understand?”

“Yes.” Tears shone in her eyes. She kept them at bay, pulling out of his arms.

She unbuttoned the top button of her jeans, lowering the zipper.

Zeke watched her wriggle out of her jeans. Holy fuck, look at those thighs. He couldn’t wait to have them wrapped around his hips. They were firm and fleshy. She would mark easily, as her skin was so pale.

When she stood in her underwear, Zeke pulled her into the center of the room. He circled around her body. The plain white cotton underwear did nothing for her figure. Zeke stood close inhaling her sweet, fresh fragrance. From her smell alone he was ready to come.

“I like the way you smell,” he said, breathing her in.

I really enjoyed this book and I would highly recommend it to others to read for there own enjoyment. :

Fantastic book. Enjoyed the characters and the plot. Very well written and balanced for a romance novel. Outstanding, Fantastic and wonderful.

Hot, Hot. This story grabs you from the beginning. Mary s a feisty half breed who captures the interest of a raiding Alpha. Could there be more to her than he first suspects?

I really enjoyed reading this book. Zeke is a typical Alpha male, who starts off being such a jerk the reader will want to hate him. Mary, however, is not your typical female. She has gumption and spirit, which has not been beaten down by her experiences. As the romance blossoms, the intrigue unfolds, making for a truly excellent story. I will definitely be reading more by this author.

Extremely hot alpha read. Zeke seamed like a jerk in the beginning but I was surprised how fast that changed. Mary is a half breed she&#039;s feels like she&#039;s never fit in any where. Bitten by a wolf on the street, being a shifter is all new to her. There are twist and turns all along the way as Zeke helps her become one with herself and his &quot;toy&quot;. This was a fantastic Hot read.

I hVe read this book many times. I absolutely love this series and his is the first installment. Super sexy alpha male makes a deal with a half-breed to be his toy. Well, it turns out she may be ,ore than a toy after all. The writing is awesome as usual. Definitely a must read!

I loved it. Enjoy reading anti heroes that get job done and done right, but may not follow traditional method of doing things. He is attracted to heroine. He makes bargain to make her his sex toy in exchange for life of a former pack member. Hero is out for blood. He is trying to find his missing sister. He is leader of his own pack and his father asked for his help in finding his sister. Following a lead he ends up killing almost all of the heroine&#039;s pack as they had hand in the kidnapping of his sister. But he soon realizes the pack he killed were doing some crazy, messed up things. This included taking his mate from him before he could claim her and using her to experiment. He soon realizes what is going on but doesn&#039;t want to say anything yet until he clears up everything. In addition, they messed with heroine&#039;s DNA, which messed up her smell. Hero is trying to clear everything up as he needs to make sure he makes right decision for her, his pack and gets to the bottom of who kidnapped his sister. The sex is steamy, but don&#039;t expect any sugary words or romance here. It is rough, dirty and hard!!! Heroine is right along with him, she has been suffering for years under calling of her wolves heat but could not get any relief as nobody would go near her. She suffered a lot of discrimination due to being turned. Hero realizes how bad her pack was as the investigation continues. The ending wraps it all up but this book can be a hard read for some. I enjoyed it. Like these type of reads every now and then. Once hero acquire heroine he was loyal and he made no bones of how much he enjoyed sex. Heroine was virgin but not by choice, but soon that was remedied;) It was a rough, edgy, shifter romance. I gave it a 5 because I enjoyed it.

Book 1 of the Alpha Shifter Series. Wow what a start to the series. A very touching book and very hard to put down. Mary and Zeke overcome many obstacles but love finds a way, being Mates help!!. loved the 6 month later part of the book, was great to get a glimpse of them in the future. Would like to know about Jessica and what happened with her.

Wow, I must say this story is not for the faint of heart. I always love a good alpha, but I just wasn’t feeling into alpha Zeke. The Alpha&#039;s Toy does have a good storyline, but it is Zeke&#039;s treatment of Mary that really will turn some people off. I do fell the relationship showed a progressive relationship between two characters and that it is a part of the story. Mary the female lead gets her say and how she deals with Zeke is fun. It was worth it in the end though. When her pack is attacked, half-breed wolf Mary will do anything to protect her pack. Zeke, the invading pack&#039;s leader, asks that Mary be his “toy” for the next month. Zeke stumbles onto the old pack leader’s secret that he was experimenting on wolves. Zeke must find out what the experiments were about, for Mary was also a part of them. Determined to keep his toy safe, Zeke will do whatever it takes to protect the woman he has come to love.

Mary is a half breed and the life is not one she would recommend. Her pack has always barely tolerated her, and the ones she called Alpha were cruel and had a plan. Mary is willing to die for an innocent, and the Alpha in her face makes her want more than any other in her life. The bargain was an easy one to make. Zeke arrives to slaughter a pack of evil wolves, only to discover innocence lives among them. The untainted Mary makes him want more than any other that he has ever known, but there is something in Mary’s past she does not know and may change her feelings for Zeke. Mary and Zeke are victims of a diabolical plan. In order to have truth with his mate, Zeke must find out what the plan is and then put a stop to it. In the meantime, he will spend time with his Toy and convince her she is the one meant for him. The Alpha’s Toy is a sexy love story with enough twists and turns to keep the reader turning the page. I fell in love with all the characters and I look forward to reading about the rest of the Alphas. Sam Crescent has a way with words and the beauty of shifter romance. I highly recommend The Alpha’s Toy and the writing of Sam Crescent. - See more at: http://coffeetimeromance.com/BookReviews/thealphastoybook1bysamcrescent.html#.U5NPROgo5dh

This story had action and drama. I really enjoyed how Mary stood up to Zeke. Once Mary was away from her old pack she was able to remember more things that had happened to her. Zeke turned out not to be a jerk, but he truly cared for Mary. I enjoyed getting to know Mary and Zeke.