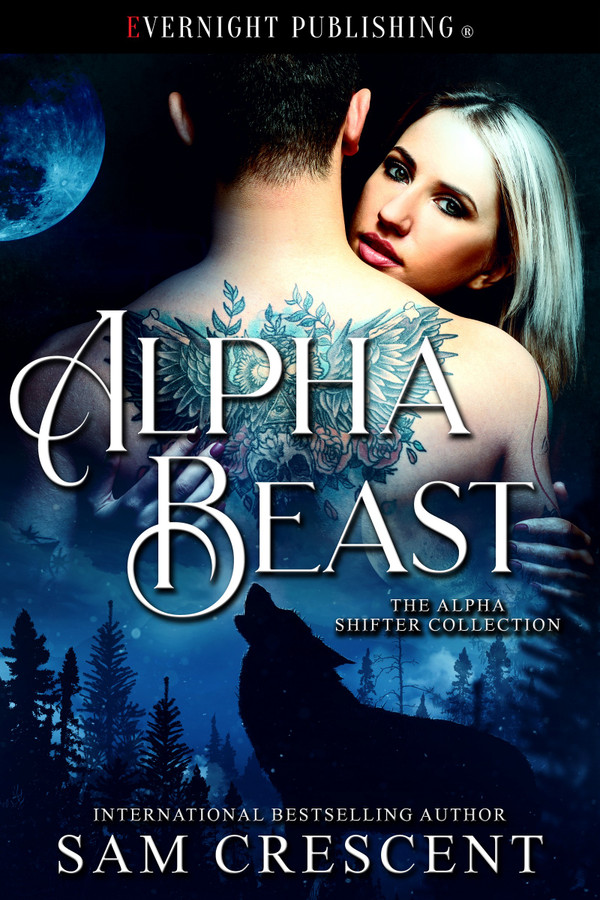 The eldest son of a warring mafia pack, Liam Wolf must secure peace by marrying the enemy’s only daughter, Jenny Luca. With long white hair and gray eyes, she cannot turn into a wolf. She talks to herself, and strange things happen around her. To many, she is a source of ridicule, but after one look, one scent, Liam is hooked.

Jenny has always known she was different. Like her mother and grandmother, she inherited the ability to see the dead. They come to her or just wander around. Many fear her gift, so she tries to hide it. Liam is not afraid, but enchanted. Their packs have judged her harshly, and nothing will stop him from claiming her as his wife.

When one of his warehouses is burned down, it’s up to Liam to find out what went wrong, especially when Jenny discovers the spirits—and a monster who intends harm. Can Liam save her in time, or will she fall prey to the curse in her family?

“The moon is full tonight,” she said.

“Are you in control?”

“No,” he said. “What’s more, I don’t want to be. All I can think about is you. All of you. Every single part of you.” He slammed his lips down on hers. Liam didn’t know what he expected, her to slap him or push him away. Instead, she wrapped her arms around his neck and melted against him. He broke the kiss to trail his lips to her neck. “You have no idea what you fucking do to me, baby.” He growled, thrusting his hips against her so she had no doubt what he was referring to.

“I think we should take this elsewhere,” she said.

He pulled back and saw the curtains twitch inside her house. “Yes, we should.”

Liam couldn’t bear to be apart from her. He took hold of her hand, locking their fingers together as they left the safety of her driveway. The city was busy, and he went straight to his car, which he’d parked away from her house only because he didn’t know how much control he had.

Opening the door, he waited for her to climb inside, then rounded to the driver’s side. He got behind the wheel, turned over the ignition, and joined the traffic. Rather than head toward the center of the city, he took them both out toward the waiting forest. It had been a long time since he’d gone for a run. The older he got, the more control he had. Right now, he had to let off some steam.

The full moon felt like a constant presence at his back, driving him to turn.

Neither of them spoke, but he felt her.

One glance at her body, and he saw her nipples were puckered against the front of her shirt. The scent of her arousal was already heady in the air, making his mouth water for a taste of her. His cock was so fucking hard he was surprised it hadn’t torn his pants in half to get free.

“I love being out in the open,” she said. “I’ve tried to leave the city so many times.” She tilted her head back and breathed in the air. “So fresh. So freeing.”

He copied her, breathing in the air that wasn’t polluted by the cars.

She released a giggle and turned toward him. “Catch me.”

Before he could stop her, she’d taken off into the woods.

He removed his jacket and without a word, followed close behind her, wanting to chase her.

His cock, already hard, seemed to get even bigger.

Would Jenny be able to take all of him?

How innocent was she?

Would seeing him naked terrify her? He hoped he had the patience to make sure she would love sex as much as he did.

All he could think about was getting her to orgasm on his cock, to taste her slick pussy. The moment he got his hands on her, he intended to make her feel good. All of those curves would soon belong to him.

He followed her scent, drawn to her. She was his mate, he had no doubt.

Even though his father hadn’t found his true mate, Liam was more sure than anything that he’d found his.

He wanted to keep her. To love her. To protect her from the world.

She made a turn and as he followed, he came to a stop when he saw her shirt was on the ground. Picking up the garment, he placed it against his nose and inhaled her scent. She smelled so good, just as he imagined she would.

Glancing in the direction where she ran, he smiled. He removed his shirt, dropping it to the ground with hers. He’d have no problem finding them.

Chasing after her, he came upon her skirt, then her panties.

He picked up her panties and pressed them against his face. Fuck, she made him harder still. Pre-cum already leaked out of the tip of his cock. He needed to get to her soon. To taste her sweet cunt before anyone else.

Great writing and characters. Nice to have a story with a different twist. Very enjoyable read.

Wow! I thoroughly LOVED this book! This had age gap, which I love, mafia &amp; shifters. You had the usual Mafia guy has to do his duty and marry the enemies daughter for the sake of the Family, but that’s where this ends. Definitely not a usual Mafia book at all. I loved Liam and how he handles Jenny’s “gift”. Jenny was a great heroine. The story flowed great and extremely enjoyable. Sam did it again. Great Story!

Awesome .. Lived every word from the beginning to the end .. Sweet sexy hot .. They feel in love even though it was an arranged marriage.. He would do anything to protect her .. Loved it ❤❤❤❤❤

I loved this book. It had so much suspense and I could not stop reading. I really liked the horror theme that the author did. Although it wasn&#039;t that much of a horror, it still creeped me out. Also loved the romance. Buy this book now

Out of all the books in this series, I think this will become a favorite! Age gap, mafia and shifters, yum! Liam has to marry Jenny for the sake of bringing their families together. I think he&#039;s in &quot;lust&quot; with her at first but the longer they are together, the more his real feelings take over. Jenny has always been the &quot;weird&quot; one in her family. She can see and talk to the dead. This didn&#039;t seem to bother Liam at all like it did others. I like the Jenny had a backbone and when Liam had left for a few days to take care of business, she called him on not getting in touch with her the whole time! There were some twists in this book that I didn&#039;t see coming and it shocked me when the truth came out about the little girl. You&#039;ll know what I mean when you get to that part. Another thing that shocked me was when Liam did what he did towards the end to save Jenny!! WOW! And I was sort of iffy about Ben but now I would really like to see his story! This book was very well written and I enjoyed it so much!

Pretty good story. Jenny has been considered a freak all her life. When her father arranges a marriage to the son of their enemy, she expects rejection. Liam is fascinated by Jenny. He has no issues with her strangeness and just wants to protect her. Jenny finds it hard to believe that Liam has accepted her differentness so well and has a hard time believing that she might escape her curse. He goes to extremes to protect her when her life is in danger. Jenny is pretty courageous and doesn&#039;t hesitate to act when she believes she is right.

Blackmailed by the Beast by Sam Crescent

Her Beast by Sam Crescent