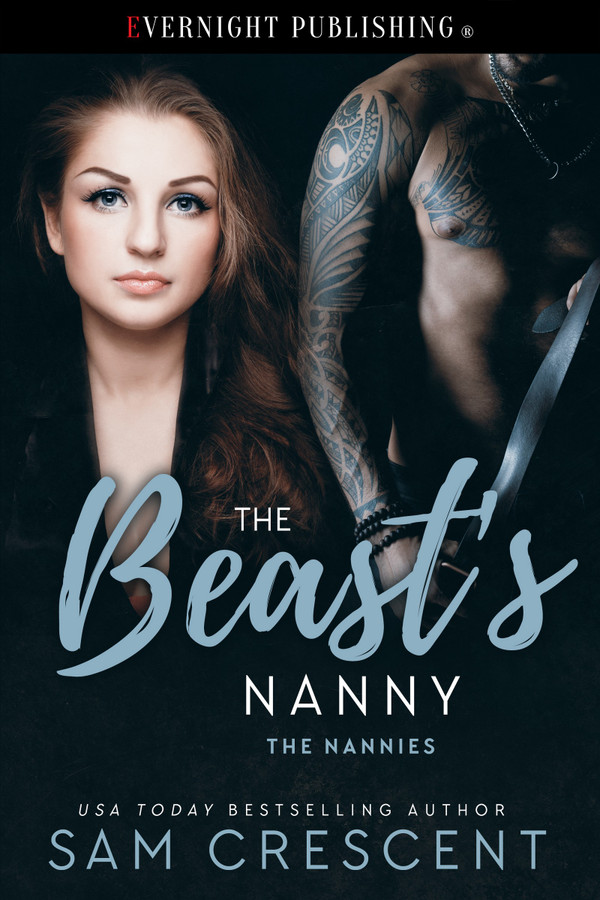 When Grace pays for a customer’s breakfast, she assumes she’s just doing a favor for a miserable man. But he repays her by kidnapping her. Before he took her, she was living a normal life, worrying about bills and money. Now she’s a nanny for his nephew, the cutest little boy she’s ever met.

Caleb Raine is a beast, having built his reputation from the ground up. All he knows is betrayal and pain. On one of the hardest days of his life, Grace is a beacon of light. He wants her, and he’s used to getting what he wants.

She’s everything he’s not used to—a woman who cares, who loves. When he offers her an ultimatum, he expects her to reject it. For a year, she'll be his personal fuck toy in exchange for her freedom. He doesn’t expect to crave her or need her.

Taking her is easy. Keeping her is even easier. Falling in love with her, though, that’s not part of the plan.

“I figured you’d have gone to bed by now,” Caleb said, entering the library.

“Yeah, well, I wanted to ask you something.”

“You can order whatever you like. I won’t have all my men at the table, but you, me, and James can have a small dinner.”

“I know everything, Grace. This is my house.” He poured himself a shot and turned toward her, offering her some.

“You don’t drink, nor do you party, or fuck random men. What do you do for fun?”

She glared at him. “There are plenty of ways to have fun. You don’t have to be drunk to have a good time.”

“In my experience, the best kind of time always holds a little alcohol.” He swallowed it down in one gulp.

“Is that because it lowers your inhibitions?” she asked.

“Must be nice.” She stared down at the book even though she’d lost all interest in reading right now. “Can I take James shopping for groceries?”

“No. Everything will be delivered to you. Just give me a list of what you need and I’ll make sure it comes to you.”

At his mention of negotiating, she wondered if he wanted an answer to his ultimatum. She looked down at her book, then back up at him before returning to her book. It was far more fascinating with pretty pictures.

“Grace, just tell me what is on your mind,” he said.

“Is this about what I said in the pantry? You’d like to know how far I’d go?” he asked.

“This has nothing…” She pressed her lips together. She wouldn’t be brought down with lying. Taking a deep breath, she returned to her book. This was by far more fascinating.

“I’m curious about your answer,” he said.

“How do you even know what I’m thinking?”

“The blush. Any time I mention sex, you get this red tinge to your cheeks. You’re embarrassed and you try to hide it. It’s cute.”

She frowned at him. “Why are you so different from the man who came and rescued me?”

He tilted his head to the side and looked at her. “Maybe you inspire me.”

She rolled her eyes. “I’m not an idiot, Caleb. I know you must have millions of women.”

She slammed the book closed. “I need to go to bed.”

She spun back to face him. “I’m here against my will. Have you forgotten that?”

“I don’t forget anything, baby. You better believe that.” He winked at her. “I’m used to getting what I want.”

“I don’t have to deal with this.” She stepped to the door.

“I know you want me, Grace. I’m not going to push you. If you think the time you take to make a decision will mean a shorter time in my bed, you’re very much mistaken.” He got to his feet and walked toward her.

She pressed her back against the door, watching him. His hand came out to rest near her head. “The clock on your freedom starts the moment you agree, not a second before. So take as long as you want. I’ve got a lot of spare time.”

He sighed. “Have you ever wanted something so badly you’re willing to do whatever it takes to claim it?”

She nodded her head. There had been a bike she wanted when she was young and her parents had given her a whole list of jobs to do before they would even consider getting it for her. It didn’t seem like that big of a deal to most, but to her, it had meant the world. Christmas Day, she’d gotten that bike and spent the entire day riding up and down the street, even in the snow. It had taken her a few years to grow out of that bike, but her parents had made sure she had another to replace it.

Driving a car had never appealed, not when it came to riding her bike. Even now, she didn’t want to learn to drive.

“Well, when I look at you, Grace, I know I want a part of your sweetness all to myself. I want to dirty you up a bit to know you’re not so perfect.” He put his hand flat on her chest.

She took deep breaths. Her pussy went slick with need. Even her nipples tightened. She wasn’t an innocent to desire or sex. She hadn’t avoided it.

Licking her lips, she tried to tell him to stop, but she didn’t want to.

“And, Grace, I want you. I want to see you lose control. To beg for my cock in your pussy, mouth, or ass.”

He moved in close.

His lips a mere whisper against hers.

Caleb is as close to a beast as a human can get. He feels nothing, and the only one he had ever loved was gone and has left behind a 3 year old child for him to care for. He has lost hope in humanity, but when the innocent looking waitress insists upon buying his breakfast on his worst day, he decides she will be his if only for a moment. Grace us aptly named, and all she wants to do is help others despite the loss of her parents. When she helps a stranger, she has no idea it will change her life and possibly take it. When she is saved and taken to the beast’s lair, she is given an ultimatum she never imagined. Caleb knows Grace cannot be as good and innocent as she sees, but he will dirty her up until her true colors are revealed. Grace has never met a man so mean, but she cannot help but look for the good in him when he reveals the truth of his past and what shaped him into the man he is. There is a monster lurking in the shadows determined to make Caleb to pay for a debt he did not even know he had. Can Caleb save the only family has left and the one who belongs to him before it is to late, or will he discover the darkness is too close to home and he just may lose it all? The writing of Ms. Crescent is superb . She takes what appears to be the dregs of society and shows him to be something more. There were many times I wanted to hurt the man myself, but Grace handles everything he does to her and throws at her in stride and never waivers. Both characters are fleshed out clearly and leaves the reader on the same relationship wave as Caleb and Grace. I highly recommend The Beast’s Nanny to any reader who desires a true alpha in their life.

This was a very good read . hot sexy and sweet at times .. He was a huge jerk to her when he took her to the apartment.. She should had made him suffer a little

At first I didn&#039;t like Caleb but as the story went on, he changed my mind about him! LOL Grace is a strong woman who gets kidnapped by Caleb to care for his nephew, James. The connection between Grace and little James is beautiful and Caleb hates the fact that he is becoming attached to her. He&#039;s not a good man and he has enemies that are after him. He thinks he&#039;s just using her for se# but when the enemy targets her and James, things have a way of changing! He doesn&#039;t want to fall in love because he doesn&#039;t believe in it, plus there&#039;s the fact that he feels guilty over his sister&#039;s death. Will he change his mind? I love that Grace challenged him at every turn and didn&#039;t put up with some of his stuff! (you know I can&#039;t say that word) This is a wonderful addition to this series and is a standalone. Loved the epilogues of course because I like seeing where the characters are down the road. And I would love to see James get a story when he gets older!!!! I feel he needs one!!

With each new book this series just gets better and better. This story starts out with a scene from a nightmare and ends with a HEA that is meant to last. I love how the characters relationship grew and expanded until it was full of joy and love. And what good romance doesn’t have the bad guy trying to ruin everything. The author did a fantastic job with this story and I can’t wait to see what she has in store for us next.

I LOVED this book!! I loved the characters and story line. Caleb kidnaps Grace to care for his nephew James. The instant connection between Grace and James is heartwarming. The relationship between Caleb and Grace is more complicated but the story is great. This is another awesome Nanny book!