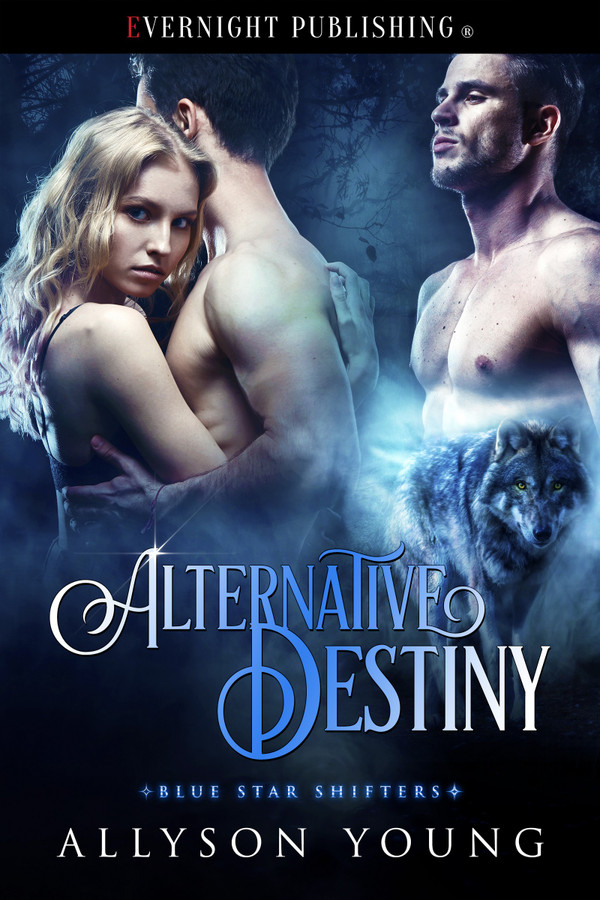 Cassie Fortuna flees back to her own pack, broken-hearted, after discovering her intended’s interest in another woman. Despite shifters being monogamous, it seems Ben isn’t.

As her twenty-fifth birthday approaches, and her heat, she resigns herself to returning—there is no one for her in Mystic River and her only sibling and her family live in Blue Star. Besides, she’s over Benjamin Kraft.

Ben hopes Cassie came back for him but is unable to breach her cold façade to finally share his dark secret. Secrets have a habit of coming out, however, and Cassie is stunned by what she learns. Intent on making things up to her, Ben succeeds in winning her back. Having never gotten over him, she embraces their new relationship.

But Cassie and Ben could be in danger, as well as someone else important to him when others learn his secret. Is the risk worth the reward?

She was cutting the crusts off a peanut butter and jam sandwich when she felt him. He moved almost silently, but her wolf was attuned and threw itself against the boundaries she’d enforced on it. His scent reached her next, that spicy fragrance with a hint of musk and Cass the woman swallowed a moan.

After setting the knife down, she transferred the sandwich from the cutting board to a plate before turning with it held in front of her like a tiny shield. Or an offering.

It took a massive effort, but she met Ben’s stare with a cool, polite one of her own. “Hey, Ben.”

“Cass.” He sauntered closer and leaned one hip against the fridge.

Having no desire to engage in small talk, she snagged her cup and moved past him, now intending to eat her breakfast in her room.

“Jett tells me you’re back for good.”

“That’s right.” She was nearly out the door when he moved with that deceptive speed he had, grasping her elbow.

When hell froze over, not that she’d pretend she didn’t know what he was referring to.

With a calm she didn’t feel, especially with her wolf begging for freedom, she shifted her weight to face him, and her elbow came loose. “I changed my mind about you. About … us. And I was too chicken to tell you to your face. Sorry. I’m such a girl.”

He watched her with the same steady regard she remembered so clearly, only without the warmth he’d faked in the past. How he’d charmed her… Old news. She fought her humiliation and looked into his eyes.

Ben had golden eyes, and she suspected his wolf was almost always at the surface but within his iron control. Thank god for that control because he hadn’t allowed them to become intimate, something that puzzled her to this day. Because surely, if he’d played the amazing sex card—and she just knew it would be amazing because his kisses made her melt—she’d have been a total pushover.

In any event, passion couldn’t cloud her thinking, even if her wolf might not agree. Her animal hadn’t yet matured, but it still knew what—who—it wanted. Her other side was surely smarter.

“You’ve changed,” he finally said as she waited him out. “What happened to you?”

You happened. Shoving back the thought, fearful it would echo in the room, Cassie lifted a shoulder, careful not to spill her coffee. “Nothing happened to me, Ben.”

Shaking his head, he backed up a little, and she breathed in the extra space. “I don’t get it, but I will. I like puzzles.”

God help her. With a smirk that hurt the corners of her mouth, she said, “I’m not a puzzle to be solved, sorry. I came back to seek a mate. Jett has granted me permission to make my choice.”

She blinked at the sudden bleaching of his sun-kissed skin, as if all the life-giving blood had drained away. His eyes narrowed, and his mouth set, a muscle clenching in his jaw. And then his face relaxed, and he laughed. The sound grated across her senses, like fingernails on a chalkboard.

“Our Alpha has been gradually changing the time-honored rules. Accommodating the females more and more. Some don’t approve, but we need to consider the period we live in, and I’ve been a supporter. Until now.”

“Excuse me?” The mug of coffee and the plate were weighing her down heavily, like an extra tiny punishment she had to endure as part of the interrogation. “What’s that supposed to mean?”

“It means that when flighty, spoiled females are given the right of choice, I question our Alpha’s wisdom.”

Successfully defeating the urge to throw her coffee in his face, Cassie found the right words. “I suppose you’ll have to take that up with him. With my brother-in-law. Be sure to mention the spoiled and flighty part.”

Her comment hit the mark. Ben flinched, barely, but she caught it. He knew he’d crossed a boundary, and she wondered what he’d do to fix it. He surprised her.

Passing a hand over his face, he said, “Dammit, Cass. What happened between us? I can’t believe we’re sparring like this. I can’t fathom how you left without so much as a goodbye or an explanation. Aside from that note.”

“You’re sparring, Ben. I’d prefer not to converse at all.” She made her exit as quickly as she could without appearing to flee. How could she tell him what she’d overheard?

“It’s not over, Cass.” His final words floated behind her, but she pretended not to hear. She didn’t care to interpret his … warning? Promise? Threat?

She gained the privacy of her room—shades of that fateful night—and shoved the door closed with her hip. Her coffee was lukewarm, and her sandwich had the consistency of flavored paste, but she grimly consumed both. She’d survived her first encounter with Ben and hadn’t given anything away, and had seen him dig himself a hole. With any luck, he’d widen it on his own and fall in.

OMG this is a fantastic book. Different than I thought it would be but absolutely fantastic! Love the main characters! Cant wait for more!

I&#039;ve read shifter books before where the female gets 2 or 3 alphas, but I can&#039;t recall a MMF shifter romance. I need more of these. While certainly non-traditional, given the monogamous nature of shifters, this does not disappoint. A secret unravels causing tensions to rise within the pack, but loyalty and love only strengthen this trio. More please.