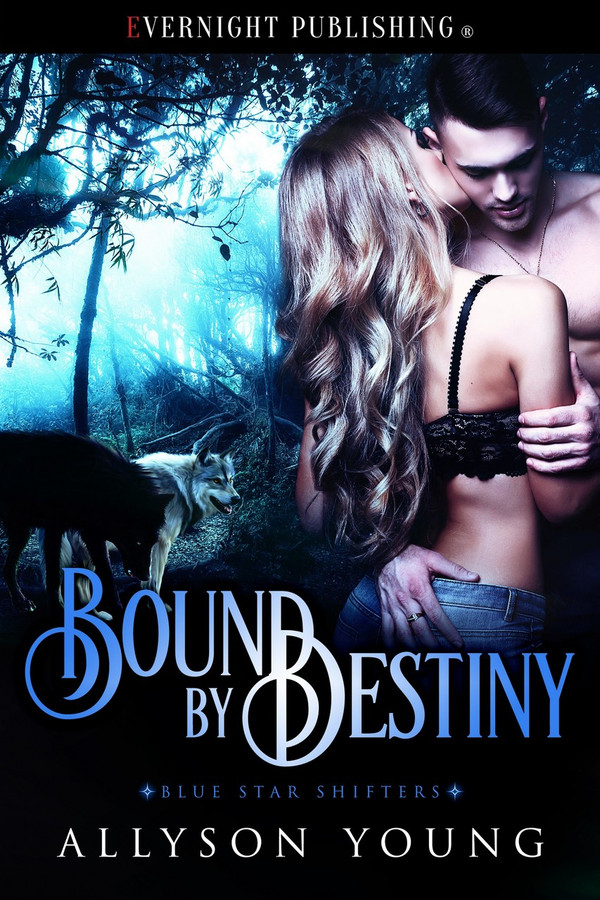 Jett is instantly drawn to River, his pheromones flooding to trigger her heat and force her sexual surrender, despite her tangible—and unlawful—means of avoidance.

Initially a mindless slave to her hormones, River comes to accept Jett past his ability to assuage her sexual need and falls in love with him. Unable to label his myriad of feelings, Jett doesn’t reciprocate, and she is devastated, realizing she is locked in a lifelong, loveless partnership.

Attacked by a rogue shifter, River wakes with no memory, and Jett must face the fact that what he felt for River all along was love—and find a way to bring her back to him.

They rode the elevator to the sixth floor in near silence, the eddies of lust making the small space nearly insufferable for him, and his mate leaned against the wall as though she might slip to the floor any moment. Her brow and temples glistened with sweat and her fingers twitched spasmodically. She was coming into her full heat and fighting it all the way.

Stepping off when the doors opened, he strode in the direction the small arrow indicated and found the room within several yards. The key card gave them entrance and he flicked on the light. He shoved the cases just inside the door, blocking the heavy panel with his forearm so it wouldn’t close. “In you go, River.”

Did women trudge? His woman did, despite the trembling of her entire body. His heart ached at her trepidation despite the all-encompassing lust he experienced. Her head down, intense need radiating to pull him in, he threw the deadbolt, and then gave in to what their nature decreed.

Thrusting his hand through her thick mane, his fingers weaving among the long, silky strands just as he’d fantasized, he drew her head back and forced her to look him in the eyes. Hers were dilated, the rich brown irises nearly eclipsed by the stark black of her pupils. Square, white teeth clenched her full bottom lip, presumably to control panting, because she drew draughts of air in through her nose. He could detect the threads of resignation weaving through her vast need, her intense heat rapidly eclipsing any coherent thought. Regret that he’d caused this again pierced his own narrowly shrinking focus—but only briefly. He lowered his head and took her mouth.

Sweetness and life burst over his senses at his first taste, and he groaned against her full lips even as his tongue made a foray past them. River totally surrendered, as female wolves do when they met their fated mate, and he barely had time for that thought—fated mate—before he wrapped an arm around her limp form. Two steps and they fell to the big bed, the mattress compressing beneath their combined weight as he ravished her mouth. She opened to let him in and gave up all the flavor that was uniquely her.

He reluctantly tore his lips away to rear up and shred the plain shirt that hid her from his view. Her lightly tanned skin filled his vision as her utilitarian bra met the same fate, and he noted with pleasure how modest her tan lines were. His wolf rose up. Mine. The growling claim resounded in the room and her eyes fluttered open and she blinked. Behind the thicket of her dark lashes, a sexual haze again blurred the rich chocolate, and her lids drifted shut.

Once they came to know one another, their coming together could be slowed and savored, but for now, he needed to visibly establish his claim. His frantic cock shuddered in agreement as he demolished the tough denim of her jeans, taking care not to score her soft skin with a claw.

With her nude beneath him, his gaze drawn to the soft, pale fur at her apex, he willed his other-self back, and his claws retracted. Lord knew what she’d seen when she’d stared up at him. Probably a wild-eyed beast intent on its succulent prey, and he blessed the Mother and the mating heat that River hadn’t screamed in fear. Only an alpha could partially shift, and it was unlikely she’d seen one in that state before.

His own apparel fell away as he quickly stripped and then blanketed his mate’s writhing form. Velvety flesh met his own in a haze of heat and sensation.

“Please.” Her plea was strangled and all the more evocative because of it.

&quot;Bound by Destiny&quot; is the first book that I have read by Allyson Young. She weaves an intriguing story about fate, misunderstandings and relationships. River is a very appealing heroine. She fears mating and all that she believes about it, yet she moves forward when given no choice. Jett is the stereotypical shifter alpha including having a healthy dose of ignorant arrogance. Ms. Young sets the stage for a complex shifter world with interesting, and sometimes, offensive traditions. The story meanders along as Jett and River get to know each other outside of the mating heat. Of course there&#039;s plenty of hot sex, but it&#039;s woven into the story. Since this is the first in a series, there a lot of worldbuilding and character introduction. I enjoyed the story very much but was a bit disappointed by the ending. It felt forced and less detailed than the rest of the tale. However, I recommend the book for shifter lovers and will definitely read the next installment. The Story: River believes that mating is akin to slavery and she wants no part of it. However, her mating heat won&#039;t let her be. When alpha Jett Reeves arrives from another pack, her fate is sealed. But hot sex isn&#039;t enough for her. Rivas wants more. Jett is arrogant and busy keeping his pack safe. He believes that he and River are destined to be together and that should be enough. A near tragedy will bring everything to the tipping point.

I really enjoyed this hot shifter book. Recommend to anyone who loves a bit of bite with the lovin.. :) Looking forward to the next one.