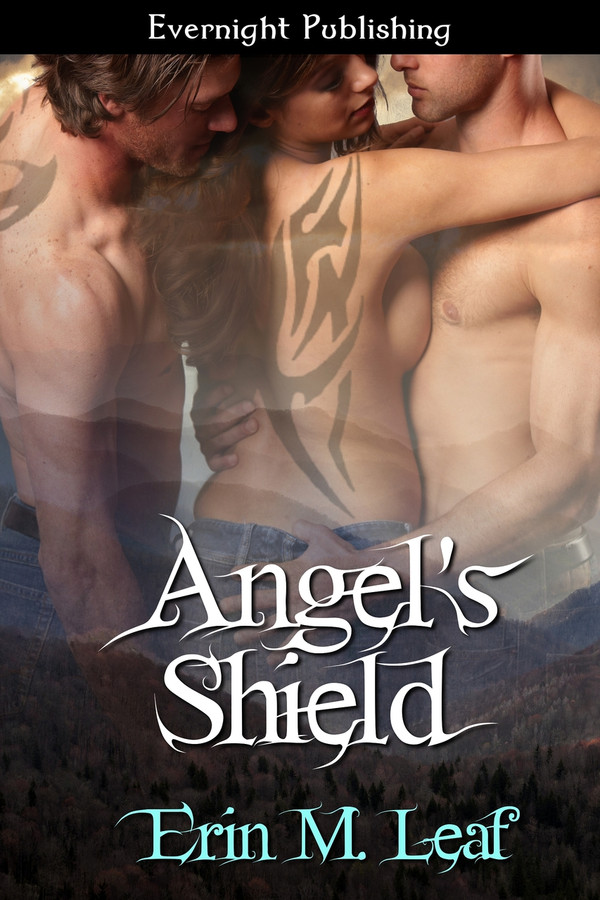 Charmiene has been alone since her grandmother died, so when two sexy hikers ask to stay in her trail shelter, she invites them into her house instead. As an Asian American in a rural town, her dating prospects have always been nonexistent.

Haniel wishes demons hadn’t ruined his ability to fly, but his best friend, Jeremiel, has his back while he hunts for the creatures that hurt him. Of course, when he meets Charmeine, all thoughts of fighting fly away. The only thing he can think about is making love.

Jeremiel would do anything for Haniel—the angel saved his life, after all. But when they meet Charmeine, he knows the time for wandering is over. She’s small, fierce, and just what they need to push them from friendship into love.

Unfortunately, the demons don’t want them to bond. They want all the angels to burn…

When the door shut behind her, Jeremiel turned on Haniel. “Are you crazy?” He grabbed the quilt and dragged it off his friend. Haniel stared at him, hair mussed. Dick hard and poking through his boxers.

Jeremiel looked away, his face heating.

Jeremiel took a deep breath. “Maybe we should talk about this.”

Haniel laughed shortly. “About what? The fact that ever since we touched Charmeine I’ve been wanting to touch you, too? That I want her more than I’ve ever wanted a female?”

Jeremiel went hot, then cold, then hot all over. “Jesus, Haniel.” He was not going to turn around and look at him while they had this discussion.

Next thing he knew, Haniel was sitting next to him. Leaning into him.

Jeremiel’s heart gave a sick thump. “Why didn’t you roll over?”

“I liked it.” Haniel shrugged. “I don’t care if that makes me gay, or whatever.”

“So do I,” Haniel replied immediately.

“What are we supposed to do with that?” Jeremiel asked, clenching his fists. His morning erection was finally gone, thank God for small favors.

“I say we stay here for a little while. Rest up.” He took a deep breath. “See what happens.”

Haniel bumped their shoulders together. “Yeah, well. So what if we are?”

Jeremiel didn’t respond. What could he say? It wasn’t like he was going anywhere. After they’d fought the demon at Castle Archangel, no one could separate them. Haniel had given up everything for him. Jeremiel would never be able to repay that. And really, who would care that he wanted to kiss his best friend right now? He glanced over. Haniel fidgeted, eyes dark. Not thinking, Jeremiel reached up and touched his mouth. Haniel’s lips were really soft.

Jeremiel leaned in. When Haniel’s mouth touched his, he shuddered. “What are we doing?” he asked, lips touching.

“Shut up.” Haniel slid his fingers into Jeremiel’s hair and deepened the kiss.

Jeremiel’s brain went offline. He gripped Haniel’s arms, cock going hard and aching all over again. He kissed his friend until he didn’t know where he was anymore. Haniel held him steady, kissing him back with such intensity that he felt their connection down to his toes.

“If Charmeine were here, we would kiss her like this,” Haniel whispered, startling Jeremiel into immobility. He bit at Jeremiel’s lower lip. “And this.” He licked inside.

“Oh my God.” Jeremiel couldn’t breathe. Couldn’t think. The idea of sharing her was more than he could take.

“She’d probably be shocked, but also intrigued,” Haniel continued, kissing down Jeremiel’s jaw. “She wants us both. Did you see her looking at us? She’s down there in her little kitchen, thinking about us right now. Wondering if we’re touching each other.”

“What are you saying?” Jeremiel asked breathlessly.

“Can’t you feel it?” Haniel asked.

Jeremiel couldn’t feel anything except the pounding of his heart. “I feel you,” he murmured.

Haniel pulled him closer. “I wish it were impossible. Why is her name Charmeine? That’s an angelic name.”

“She’s human.” Jeremiel slid his hand down Haniel’s arm, gripping hard, as if he were about to slide off a cliff and only his friend could save him.

“I’m not so sure about that.” Haniel kissed him again and Jeremiel couldn’t stop him. Didn’t want to.

“Angels don’t mate with humans. They don’t mate with two people, either. They pair up,” Jeremiel said against Haniel’s mouth. He trembled. What was happening to them? His skin was on fire. “Trios are a myth.”

“Stop that.” Jeremiel grabbed his hands, then slid an arm around his neck. “You’re not broken. You’ve never been broken. Even if you never fly again, you’re still you.” From the look on Haniel’s face, his friend didn’t believe a word he said. Fuck this. Jeremiel turned, climbing on top of him and pushing him down onto the bed. He shoved his cock into the hollow between Haniel’s hip and abdomen. God, so fucking good. “Shut up.”

Haniel closed his eyes and bucked up, his own hard-on bumping against Jeremiel’s. “This part of me isn’t broken, just everything else.”

Jeremiel bit his neck. “I said, shut up.”

Haniel panted, hips moving urgently. “You have no idea what you’re doing.”

Angel’s Shield by Erin M. Leaf is fourth in the Angel Shifters series. Charmiene has no family left. She is lonely and longs to fly. Since that is impossible, she continues to live life the best she can. That all changes when she meets Haniel and Jeremiel, she doesn’t understand why but she trusts them. When she offers them her home she can’t explain it but knows part of the reason may be her attraction to both men. I think the more interesting character in this story was Haniel. He struggles with the loss of his wings. He uses his anger with his loss to protect his people. Demons are on the rise and someone needs to stop them. In fact he has an easier time accepting his growing feelings for Charmiene and his changing feelings for Jeremiel. I thought this story was well written. Ms. Leaf gave us well-developed likeable characters. The chemistry felt real and believable. It also moved her story arc along without detracting from the love story between these three. I am looking forward to more in this series.

I don’t think I say it enough. Erin Leaf is AWESOME!! I am so glad that I discovered her when I did. Every single book that she writes is damn near perfect! I crave originality. Sure, the everyday billionaire, cowboy, rock star, fireman, shifter stories are great. I love them, but sometimes, I just NEED something different. That’s when I turn to Erin. Every single book that she writes is unique. Lots of them involve characters that I’ve never seen before. “Angel’s Shield” is about…well…angels. Specifially, two gorgeous angels, Haniel and Jeremiel, who are best best friends on the hunt for demons. Tired after so much traveling, they find themselves in a small town diner where they meet the woman who will complete them. The connection is pretty much instant, and the chemestry is palpable. I don’t want to give away the whole story, so let me just say that the three of them, when they’re together, are very formidable demon destroyers. The rest? You have to read it for yourselves. I mean that. This book isn’t very long, so things need to happen quickly. However, you won’t break your neck with the speed. There is a nice buildup, and the payoff is VERY satisfying. The relationship between the two men is explored, and it turns out to be very sweet. Each man has a differenty type of relationship with Charmeine, but each are caring and warm. Oh, and I should mention that it’s all so sexy!! I just loved this story. I know it sounds like I’m gushing, but it’s true. I devoured it in less than two hours, even though it was 2:00 am. I didn’t want to put it down, and the drowsiness that I’m feeling today was totally worth it. Please do yourselves a favor and pick this one up. It is a very pleasant little surprise.