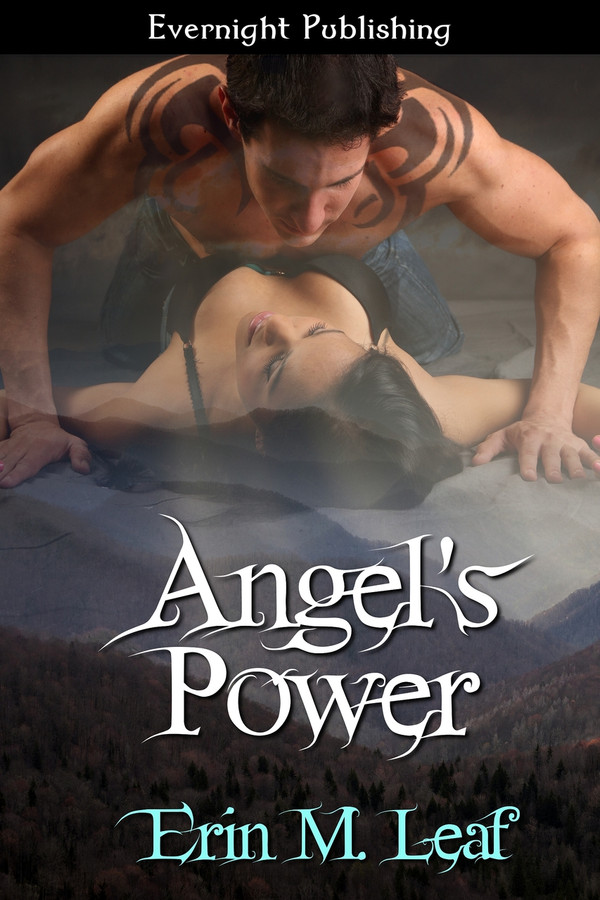 Ariel doesn’t understand why her wings are changing colors. She doesn’t know why energy flickers through her and she doesn’t have time to worry about it. Demons are loose and she must help her brother lead their People.

When Suriel, the angel sorcerer, arrives and offers his help, Ariel’s immediate attraction to him confuses her. She wasn’t looking for a mate and is afraid to commit to anyone while her wings are damaged. And the demons are out there, waiting for the angels to show weakness…

Suriel doesn’t want a mate. His power is strong, but very unstable and he is terrified that he will hurt someone if he lets anyone get too close. The only reason he came to Castle Archangel is to help defeat the demons. However, Ariel, the Alpha’s sister, draws him like no other woman ever has. And when she is injured in a battle, he will do whatever it takes to take care of her.

“Ariel,” he replied, lips at her cheek. She went perfectly still. His heart gave a hard thump, and then he said the words he’d fought not to even think these past several weeks. “I choose you. I choose you as my mate, my equal in power, sorceress to my sorcerer. I choose you until eternity scatters our energy to the winds and we are reborn once again, our power to serve our People, as God wills.” His hands tightened around her, trembling. He wasn’t sure where he found the words to claim her as his mate, but they felt right. Ariel was his destiny. He prayed she would return his words to him, soul to soul.

She took a deep breath, and slid her hands up to frame his face. This high up there was no breeze, but her wingtips fluttered with the power that held them alive and warm in such thin skies. Tiny puffs of warmth misted around their faces as they hovered above the planet, almost at the edge of space. Her eyes were wide and shocked, but then she seemed to see something in his face and her expression relaxed. “Suriel, I choose you in return. I choose you as my mate, my equal in power, sorcerer to my sorceress. I choose you until our energy fades back into the winds and our souls are reborn once again, our power ebbing and flowing, always in service to our People, as God wills.” The moment she stopped speaking, power slammed into them, tossing them across the curve of the Earth.

Ariel cried out, but Suriel caught her again, wrapping his arms around her as they plummeted down, wings tight against their bodies. The power had them in its grip and it wasn’t letting go. He tucked her face into his neck and began to pray. He didn’t understand what was happening, but if he had to die, he at least wanted to go down protecting the woman he loved. Her heart beat against his, skin to skin, and he felt her terror as they fell from crystal cold into winter chill. Just as they were about to hit the snowy ground, the power pushed through them again and their wings unfolded in unison. Air caught them and they swooped up into the skies together.

Ariel lifted her face as Suriel took control of their flight, angling into the cold breeze that flew just below the ridge line. Her long hair streamed out behind her, sifting through the feathers at her shoulders.

“My God,” she breathed, still trembling.

He swallowed, agreeing wholeheartedly with her. “Yes.”

He nodded, letting her slip out from his grasp until only their fingers touched. The power calmed down, settling into his bones. When he looked at her wings, the silver tips glowed, bright with energy. “You are truly a sorceress now,” he told her.

She glanced at him and angled their flight back to the castle, gripping his hand firmly. “I can feel the energy in my body. It’s like a wild wind, untamed and almost brutal, and I’m holding the leash.” She frowned. “No, I am the leash and the power, simultaneously.”

He smiled. “You’ve managed to describe the indescribable.” His power felt different. Not weaker, but more controlled. He sucked in a hard breath, trying to wrap his mind around what had happened. He’d spent so much of his life trying to control this energy; he couldn’t truly accept its sudden docility. No, it’s not docile, he thought, letting Ariel lead him home. It’s still ferocious, but it’s also more a part of me than it ever was. It’s who I am, not what I can do.

She snorted. “Is this what it felt like for you, all these years?”

The smile dropped from his face. Above them, the bright moon hid behind a few dark clouds. The castle loomed large and solid, just ahead. He didn’t answer until their feet touched the windowsill. “No. The power wasn’t truly mine until you touched my soul, Ariel. Without you, the power controlled me. Now that you are mine, we are the power and the will together.” He cupped her cheeks, tilting her face up. Her nose was pink from the cold, but she didn’t look one whit less stunning. “The power is who we are, now.”

She blinked up at him, soft and beautiful and then her smile bloomed over her face, light and happy. In the next moment, the moon slid back out from behind the dark cloud and Suriel touched his lips to hers for the first time as the light sparkled down over them like glitter.

His lips felt like velvet. He kissed her and Ariel had to hold on with all her strength as the energy they shared danced between them. His body was warm and solid against hers. She opened to him, helpless and wanting. He deepened the kiss, sliding his tongue into her mouth. She gasped. He pushed closer, his cock shoving against her hip. He kissed her until she ran out of air and had to tear herself away, panting.

She trembled and stepped back, floating down into the library. One look across the room confirmed it was still empty. Another look and a tendril of power locked the door. She spread her arms wide as her wings slid back into her body, leaving her in jeans and a halter. “Come and get me,” she said, smiling through her arousal. Her skin pricked with energy and she felt more alive, more in control of herself than she ever had before.

He growled, stepping into the room. He closed the window, but didn’t pull the drapes shut. Moonlight vied with the firelight across the hardwood floor. Ariel moved back until her toes touched the fluffy rug in front of the hearth. Every breath she took felt weighted with heat. Suriel stared at her, muscled chest flexing as he shifted back to human. His legacy marks glowed blue and silver along his arms as he popped the button on his pants. She licked her lips as she stared at his erection. He was so much bigger than her, but his power and hers was the same. It made her want him so badly her fingers shook as she tugged at her halter.

Suriel stepped forward, hands going to the knot around her neck. “Let me,” he breathed, kissing along her jaw as he undid the tie. He held it in place until he slipped the lower knot around her back free, too, then drew the silk away, baring her to his gaze for the first time.

She sucked in a gasp as his hands circled her ribs, then cupped her breasts, thumbs flicking expertly over her nipples. She gripped his forearms, pressing his marks into his bones. “God, Suriel.”

“Not God,” he murmured, lowering his mouth to her. “Just an angel.”

When darkness enters the angelic world once again, only those with powerful secrets of their own are able to stand against the oncoming destruction. Suriel&#039;s angelic marks are imbibed with the powerful magic granted only to a sorcerer. He can speak to the wind and sees terrifying glimpses of the future. Despite his angelic status, he experiences flashes of power and disturbing premonitions that are unstable at best and overwhelming when at their worst. He has spent the last years hidden away, working tirelessly to gain control of his powers, but now feels compelled to travel to Castle Archangel and assist in the escalating fight against their Demon enemies. While his mother encourages him to look for a mate during his time away, Suriel would never risk the life of his most beloved by binding her to his treacherous powers. Ariel serves as a trusted advisor to her brother, angel Alpha Gabriel. Her ability to maintain order amidst the haughty and self-serving attitudes displayed by the ancient angelic council is invaluable. No one suspects that her delicate body bears a disturbing secret--her angelic marks are slowly changing. Dark blues and faint silver hues now mottle the formerly luxurious brown marks. Since these changes are also mirrored in her wings, she fears the changes may be a sign of illness. Suriel&#039;s unexpected arrival at Castle Archangel could not have come at a better time. There are disturbing shifts in the very foundation of the ancient castle&#039;s magic, but even more upsetting is the unexpected impact that Suriel and Ariel have on each other. As the demonic influences grow they are forced to work together to protect their people. The continued proximity only adds fuel to the simmering flames of their growing attraction. When tensions between the two finally reach a breaking point, their individual secrets are exposed and the explosive outcome is beyond their wildest imaginings. ANGEL&#039;S POWER, the second book in Erin M. Leaf&#039;s Angel Shifters series, is a fast paced and well written example of paranormal erotic romance at its best. With emotionally complex characters, an adventurous storyline and tantalizing sexual chemistry, this novella-length story engaged my attention from start to finish!

Suriel and Ariel never thought that they would ever find someone who they could call their own. Fate brought them together and the attraction that they felt for one another could not be denied. Will they let their fears of what the future may bring stand in the way of finding true happiness? Or will they be too stubborn and end up exactly the way they were — all alone? I enjoyed this paranormal romance story. This is a fast-paced story that is filled with a lot of action and several very steamy sexual encounters between the two main characters. I liked Ariel. She was strong, smart, and loved to tease Suriel. I liked Suriel too. He was gorgeous, protective, and playful. He tried really hard to resist falling for Ariel because she was a temptation that he thinks he does not need in his life even though deep down he knows that they do belong together. I thought they were perfect for each other because they think they are defective, but when they are together it no longer seems to matter. I also liked both of their families. The love scenes between them are melting hot. This story contains very explicit love scenes and language.

Kiss Is A Four-Letter Word by Erin M. Leaf