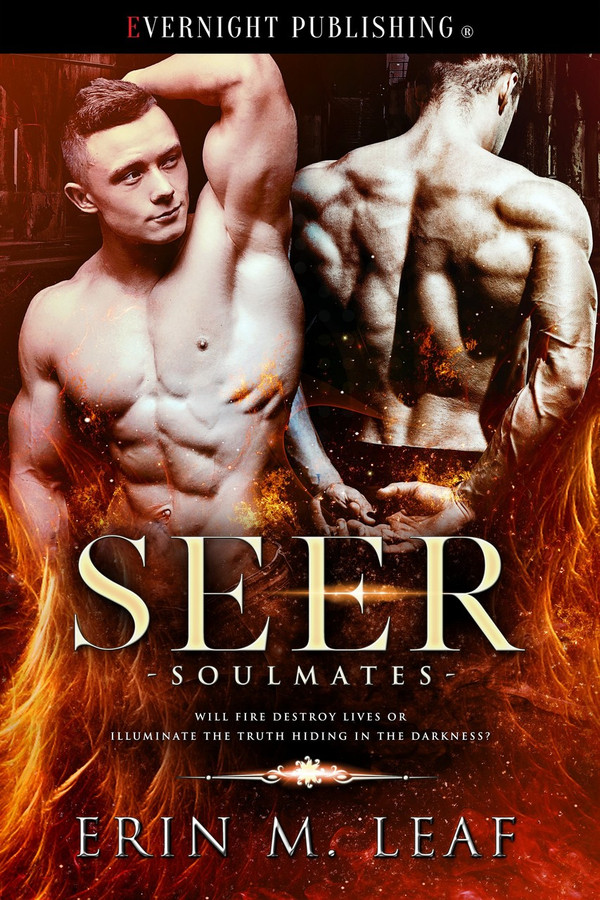 No one knows that Nick Auspex is a Seer, but his power is very real—that’s why he knows he’ll always be alone. Since childhood, he’s seen visions of his soulmate caught in the midst of a terrible fire. So when he’s assigned to protect Jeff Wright, he knows their mutual attraction is destined to go nowhere.

When Jeff opens the door to find the Craft Council’s security expert on his doorstep, his first instinct is to send Nick away. Jeff is human, but Nick is a powerful Crafter, and everyone knows relationships like that never work. Jeff needs to figure out who murdered his parents, not screw around with some random guy when he’s never even dated another man before.

Of course, neither of them can control fate—and when two soulmates meet, destiny trumps fear. Will fire destroy lives or illuminate the truth hiding in the darkness?

Jeff waited for Nick to make the first move. The man felt large and hot and completely fucking overwhelming, but there was no way Jeff was about to let go. Not now. Not after the gunshot, and the fire, and the last two weeks of grief, and the last two years of denying himself everything he wanted. He’d thought he was a chemist, and he’d been wrong. He’d thought he could believe the cops, and move on after his parents died, and he hadn’t been able to open his eyes without feeling total denial of what everyone told him must have happened. His parents hadn’t killed themselves. And I thought I was straight, but that was before Nick broke down every door I tried to keep closed, he mused, feeling as though he was finally seeing things with complete and utter clarity.

“I’m alive, and I’m fucking sure,” he said, goading Nick. He needed Nick to kiss him again. He needed Nick to push him into the wall. He needed things he didn’t have words for. I want my life to be worth something more than to be the failed experiment my parents couldn’t deal with.

“Dammit,” Nick growled, and then he kissed Jeff again, but this time he wasn’t gentle. He wasn’t soft. He didn’t ease his way into it, as if Jeff were a blushing virgin. He dove in, forcing Jeff to open up or else. “Give it to me,” he muttered, biting along Jeff’s lips. “Come on. Open your mouth.”

Jeff gasped, hands moving to Nick’s hair. He liked the stubble scraping at his skin. He liked the controlled violence of Nick’s hands on his face. “Come on. Do it. I’m not going to break. I’m not fragile.” If there was one thing he knew, one thing he’d always known, it was that he was a survivor.

“No, you’re not,” Nick said, pushing into him. His erection slotted up against Jeff’s hip, hot and heavy. Jeff sucked in a shocked gasp as he felt another man’s cock against his body for the first time, but then Nick bit his jaw, stealing even the ability to string two thoughts together. The door behind them creaked with their weight. Nick opened it and dragged Jeff through, and he didn’t even try to resist. He wanted it. He wanted Nick, God help him. The bodyguard pulled him down the hall and into the first bedroom.

“Oh my God,” Jeff said, fighting to breathe as Nick kissed him again. He pulled away, ignoring Nick’s frustrated expression, and then he took off his shirt with shaking hands, vaguely surprised at how hard his cock was. He’d never been this revved up before. His ex hadn’t ever gotten him this randy, and she’d been hot as hell. She was beautiful, but she also lied all the time, he thought, hesitating a moment. What the hell am I doing here?

He stared at Nick. Nick’s hazel eyes had darkened, and Jeff felt a hint of fear. He was about to take a step he didn’t think he could ever come back from, but his cock was hard enough to hurt. He couldn’t think. He couldn’t remember what the hell he was supposed to be worried about. He palmed himself through his jeans. Maybe if they did it quick, it would be okay. “I’m too close to the edge for anything complicated,” he said, voice rough. His mind shied away from what complicated might mean.

“I’m not going to let you go off before I can have my fill,” Nick said, slowly unbuttoning his shirt. “Deep breaths, Jeff. I won’t let you fall.” He peeled off his shirt.

Jeff stared as muscles on top of muscles peeked out. He wanted to press his hands onto Nick’s chest and just feel. “God. What are you doing to me?” He’d never felt quite like this before. Was it the danger from the lab? The gunshots? Being attacked, not once, but twice?

“You’ve never done this before,” Nick said, stalking closer. He undid his pants, but didn’t take them off. He’d lost his shoes already, and Jeff had no idea when or how. “So you’d best prepare yourself.”

“I’ve had sex,” Jeff said defensively, puzzled by Nick’s statement. He frowned when the older man went to his knees. “What are you doing?”

“What do you think I’m doing?” Nick said, staring up at him.

Jeff’s mouth went dry. “Oh, hell.” He grabbed himself, needing the pressure to keep from spontaneously combusting. He didn’t know what he’d expected, but Nick on his knees in front of him wasn’t it. “I’ve had sex,” he repeated, like a mantra. This wasn’t going to be that different from what he’d experienced with his ex, right?

“You may have had sex,” Nick said, hazel eyes dark with lust. “But you’ve never had sex with me.”

I was very excited to return to this intriguing world the author has created in her ‘Soulmates’ series. It is a world where very few people (approximately 1 percent) have a power, a Craft, and within that tiny percentage even fewer have any active talent. In the previous installment I read about Guy who has a strong wood Craft and Theo who is exceptionally gifted in empathy. At the end of that first introduction to the series and the world (I do recommend you read these in order, by the way), Theo has taken over as Council Head after uncovering some misdeeds within its ranks. In his new position he sends Nick, Council security and high aptitude Seer, to investigate a murder/suicide which leads Nick to Jeff, the human son whose parents are now dead. “His parents had been researchers. They had minimal Craft power, and counted themselves lucky to have found each other, and been able to bond. Jeff had been born without any Craft power, and it had driven his father crazy. “They always said it wasn’t fair that I was born human,” he told Nick. Nick looked up from the nightstand drawer. “It bothered them?” “Yeah.” He ran a hand down his face. “They spent their lives researching genes, and the biomarkers that signified Craft versus human traits.” Nick is a Seer but no one has ever believed him because that Craft power doesn’t “exist”, at least not in the archives, so Nick has spent his life hiding his ability and the amount of power he truly has. Even his parents didn’t believe him about his visions and he couldn’t stop their deaths. Jeff was born without any Craft power and even though his parents tried to scientifically find a way to jumpstart recessive Craft genes (causing him to have a number of really rotten teenage years) so far nothing they tried *cough* injected him with *cough* ever worked. Or, did it? But I don’t think Jeff’s parents had any idea what could happen once Jeff bonds with his soulmate… I’ll admit that the mystery/suspense portion of this story definitely didn’t hold my interest as much as Jeff discovering power and the relationship between him and Nick. I wasn’t surprised that the radical group who were working under Theo’s father in the first book didn’t disappear once his dad was gone but, instead, found a new psycho to follow. Nick and Jeff spend considerable time trying to evade the people who want Jeff’s parent’s formula even though they don’t know that it doesn’t work unless you have the bonding energy to help with the latent genes. Of course, these kind of people only believe what they want to, so trying to get them to understand that is a lesson in futility. I so enjoyed the worldbuilding again, but I really wish I’d gotten more of Nick and Jeff’s romance, their relationship, and how their powers worked especially after they bonded. Jeff’s, in particular, is quite unique and I would have loved seeing more of his abilities. All in all, however, I liked this second book in the series and I’m looking forward to more.

SEER is the second book in the Soulmates series, and oh my goodness, this was a good read. We start off with Jeff, mourning his parents and not believing the murder-suicide the police have told him. Then Nick shows up at his door, and confirms without proof that it was murder. This starts a whole chain of events that has Jeff being shot at, potentially blown up, tortured, and held hostage. Oh, and Nick and Jeff find out that not only is Jeff not human, but he is Nick&#039;s soulmate too. Can I just say here how much I am loving this series?! Jeff has had girlfriends in the past, but was never convinced he was &#039;just&#039; straight. Nick has always been gay, but what these two feel for each other is off the charts. I loved how not only were they soulmates, but they made each other stronger. This is a fast-paced, full of action both in and out of the sheets, story, with no editing or grammatical errors that disrupted my reading flow. It was a delight to enter this world again, and I adored how Guy and Theo had their cameos. This is not a world I am ready to leave, it is that well-built. The characters are amazing, and I really can&#039;t wait to see where Erin M. Leaf goes next. Absolutely recommended.