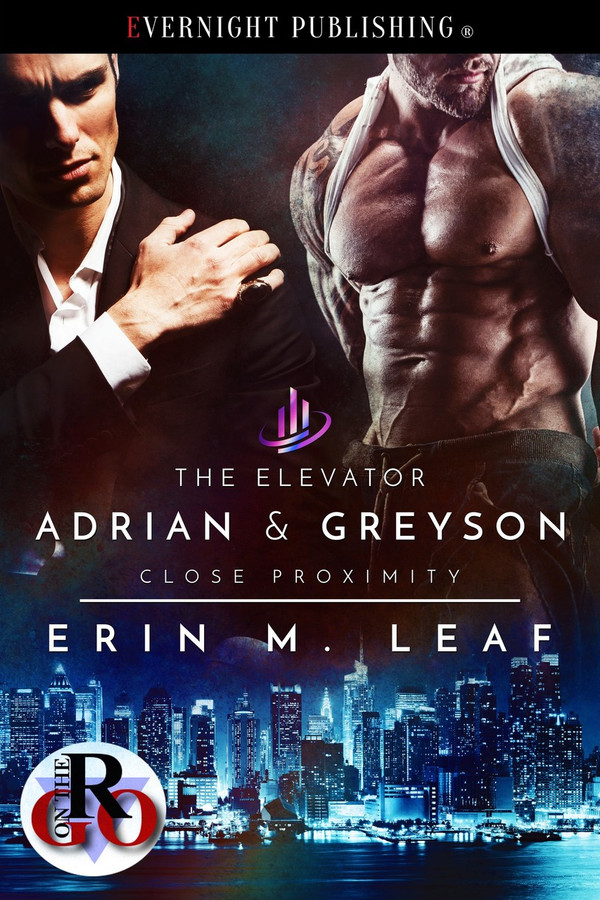 Adrian Hughes is a geek who sucks at social interaction because awkward is his middle name. Even though he’s gay, he’s the opposite of flamboyant (when they were handing out fabulous, he was hiding in another room). Even so, he’s always wanted a boyfriend—who doesn’t want to find love?—but so far, the closest he’s gotten to it is crushing on the hot older guy he only sees on the elevator. So what happens when he’s trapped inside it with Mr. Zillionaire Hottie during a heat wave brownout? He stutters like an idiot, because Mr. Greyson Lee is unexpectedly cool, calm, and collected … right up until he’s not.

When kissing leads to sex, Adrian can’t say no. But is it just a hookup? Or is it the start of something more?

Adrian lost the ability to breathe the moment Greyson’s tongue slipped into his mouth. The hint of bourbon on the edge of the coffee he smelled earlier was without a doubt the sexiest taste he’d ever experienced in a kiss. He wrapped his left hand around Greyson’s head, sinking into the soft strands of his hair, and wrapped the other one around the man’s bicep. “Fuck,” he moaned, when Greyson slid his mouth to the corner of his lips and sighed.

“Not in the elevator,” Greyson said, and Adrian choked on a laugh.

“No, I’m not into public exhibition,” he said, wondering wildly if there were security cameras in here. He glanced up at the ceiling but didn’t see any tech that might indicate a hidden lens.

Aw, fuck it, Adrian thought as Greyson’s strong, warm body pressed him into the brass railing. It hurt a bit, but he didn’t give two shits. “Jesus, Greyson.” He bit the older man’s plump lower lip, then sucked away the sting. “You’re killing me.”

“Ha,” was all Greyson said, but then his hands were unbuttoning Adrian’s shirt. “Nice,” he said, when the lapels gaped open. He put a hand on Adrian’s chest. “You work out.”

Adrian couldn’t remember if he worked out or not. He could barely remember his own damn name. “God, don’t tease me.” He wrapped a leg around Greyson’s calf and brought their groins together. When their erections touched, he groaned. He needed to get off so badly his hips jerked without his conscious control.

“Fuck,” Greyson muttered, hands dropping to Adrian’s ass. He ground them together, pushing Adrian into the railing even more. “I haven’t been this worked up in years.”

“This is crazy,” Adrian agreed, hips rolling into Greyson’s. He kissed the older man again, then shoved him away. “Stop.”

Adrian already had his hands at the older man’s pants. “Unbutton, you stupid fucking— Ah.” He breathed easier when the inside button popped off and didn’t feel even a hint of regret as it pinged off the wall and rolled into a corner. He was too busy unzipping the placket and reaching his hands into Greyson’s boxers. “Jesus, you’re big.”

“Yeah, just like that,” Greyson said, voice dropping even lower.

Adrian wrapped his fingers around Greyson’s cock and stroked. “How are you so perfect?”

Greyson made a sound halfway between a laugh and a moan. “I’m not even close to perfect.”

Adrian let go and unbuttoned the rest of Greyson’s shirt, pausing to take in the amazing tattoo inked all over his chest. “Wow.” He slid his palms all over the smooth skin. “That’s fucking gorgeous. A dragon?”

Greyson shrugged. “My father was fond of dragons. Said they were good luck.”

Adrian nodded. “I want to lick you all over.”

Greyson laughed. “By all means.” He leaned back, arms open. He should’ve looked ridiculous, standing there half dressed with his cock pointing out, but he didn’t. He looked like a warrior emerging from modern clothes: fierce and hot and quietly menacing.

“Don’t poke the dragon,” Adrian murmured as he went to his knees. He pressed a fist to his erection, hoping like hell he wouldn’t go off like some teenager out for his first ride.

“Yes, you are,” Adrian replied, leaning in and inhaling the musky scent of him. God, he smells good. He rubbed his cheek against Greyson’s cock, and then took it in his hand. “I’m going to suck you until you forget your name.” Greyson exhaled, and Adrian licked his cockhead. “Fuck, you taste good,” he said against the soft skin, and then he closed his eyes and opened his mouth. Hands sank into his hair as he slid down, scrubbing his tongue along the shaft. When it hit the back of his throat, he swallowed, then relaxed. He could do this. So what if he was seriously out of practice? He wanted to deep throat this man. He wanted Greyson to lose his mind, and he wanted to be the reason.

Adrian swallowed again around the cock in his throat, then slid off, slowly. “I’m not a god,” he said, smirking up at the older man.

Greyson blinked, then smiled. “No, but you have the mouth of an angel.”

In the ‘Romance on the Go’ series things happen quickly with insta-lust the rule rather than the exception, and ‘The Elevator’ certainly fits the mold. Even though geeky software engineer Adrian has been lusting for Greyson, the hot, older man who works on the top floor of his office building for over a year, they have never shared more than a greeting in the elevator. Until, that is, one fateful Friday night when a power outage locks them in close proximity for a few hours and they share… well, let’s just say words are not all they exchange! They are so hot together that it’s a miracle the elevator cables don’t melt. Adrian may be socially inept, but his one-on-one skills are impeccable. Except when the elevator starts moving again and Greyson is pulled away by his assistant waiting for him in the building’s lobby, Adrian has no idea what to do. Was the encounter just a hookup? Would he and Greyson have anything to say to each other if they went on a date? Does he dare find out? Lucky for me – and him – Greyson has a plan and I loved seeing how it plays out. If you like your romances hot and heavy, if you enjoy a good May/December pairing between a geek and a zillionaire, and if you’re looking for a read that feels like reading an erotic modern-day fairy tale, then you will probably like this short story.

THE ELEVATOR is the first in the Close Proximity series, which from the looks of this book, is going to be short and steamy reads! Adrian is a self-proclaimed geek, and works hard for a company that doesn&#039;t really appear to deserve him. Greyson is the owner of the building, definitely a millionaire but probably a multi-billionaire, and has his sights set on Adrian. This is a short story, so expect a fast pace. The whole story takes place from Friday through Monday, so don&#039;t expect too much detail. The details you do get though are brilliant and really help to see all the characters. It is well written, with no editing or grammatical errors that disrupted my reading flow. I would recommend this read as perfect for a coffee break book, so long as you don&#039;t mind being hot under the collar! More in this series? Bring it on!

I really enjoy stories where the MCs are trapped together and this one is no exception. This has a nice balance of humor and sexiness. Great start to the series and I can&#039;t wait for the next one!

A hot and amusing little tale which made me grin a lot. I just loved Adrian’s geekiness and the way his mouth ran away with him. Greyson was all things hot and mysterious, and I loved the way he came to Adrian&#039;s rescue when he needed to. Great story telling

What a nice little surprise. This little jewel ticked a thew of my &quot;hell Yeah&quot; boxes I really enjoyed this book I just wanted more I really think these characters have so much more to share with us I don&#039;t want it to end just yet. If you love age gap and hot sex in elevators with a geek an a Zillionaire then you will have to read this very very very short book(LOL)