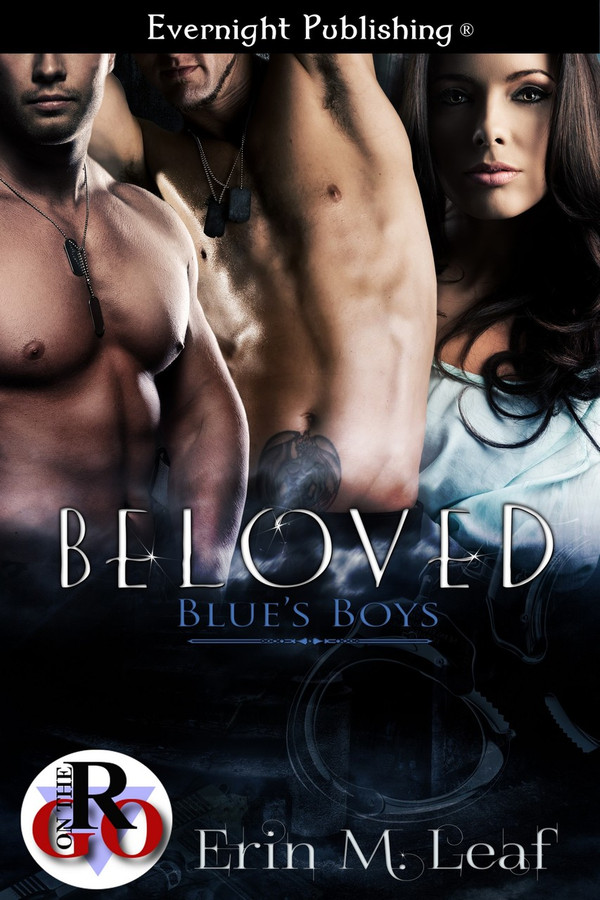 Blue thinks her life is pretty awesome—after all, she has two sexy boyfriends and an exciting career scaling walls and breaking open safes. What more could a woman ask for? So what if her boys are cops and she’s a thief? They haven’t arrested her yet, right?

Matt and Liam love Blue to distraction, but when one of her throwing blades turns up sticking out of a dead thug’s body, their acceptance of her lifestyle faces its biggest threat. They think she’s been framed, and saving her life is more important than arresting her for murder, but old habits die hard. And unfortunately, Blue isn’t the kind of girl to let someone else take the heat for her problems.

Can their love survive murder, an unexpected surprise, and a dirty cop bent on silencing the thief who can expose all of his despicable plans?

Liam slid his hands into Blue’s hair, savoring the softness of it. Sometimes he couldn’t believe she was real. She felt like everything he’d ever wanted, but didn’t know he could have. Blue was strong yet feminine, intelligent yet sweet. She could take care of herself, but she also knew how to let him and Matt take over when she’d reached the end of her rope. He loved that about her. He loved that she trusted them so much.

“Blue, you’re so beautiful,” he told her, kissing down her jaw. “I want to fuck you until you can’t move.”

She laughed, winding her arms around his neck. “Is that even possible?” she asked, unconsciously echoing her earlier question.

He grinned. “Let’s find out.” He gently stroked the skin beneath her ear with his thumbs, then kissed her again. He couldn’t get enough of her.

“You two come up with the best plans,” Matt said, reaching down and pulling up Blue’s shirt. Liam let her go so his partner could take it off. She sighed as he slipped it up and over her head.

Liam groaned when he saw that she was nude except for a tiny pair of purple silk panties. “Wow.” He sucked a kiss onto the mound of her breast, then moved down to the nipple. He played with it until she gasped. Matt grinned at him over Blue's shoulder.

“Put her on the bed,” Matt said, hands on her hips. "Let's see what she does when we’re both doing that.”

“Hey. She can hear you talking about her,” Blue said, hands curled over Liam's forearms.

He licked her nipple again, then bit it. She gasped. Liam picked her up and tossed her on the bed. She bounced, glaring at the two of them.

“Are you ganging up on me?” she asked, hands on her hips.

Liam shook his head. She looked adorable. And sexy. God. He reached down and adjusted his erection. “Yes.”

Her eyes flashed. “Payback is a bitch, you know.” She trailed her fingers down her waist to her mound. Liam’s mouth went dry when she slid a few fingers under the fabric to play with herself.

“Christ,” he muttered, swallowing. He took off his sweater, pulling his undershirt with it. The look on her face when she saw his bare chest made him feel ten feet tall. “We’re going to make you feel so good, Blue,” he murmured, popping the button on his cargo pants.

“What?” she asked, staring at his groin.

Matt chuckled. “Don't worry about it, honey.” He slipped out of his shirt and jeans, then crawled up the bed, distracting Liam with his absurdly tight ass.

“Jesus," he thought, flushing. Between the two of them, I'm going to break something in my brain. He shook his head, then joined Matt on the bed. Together, they suckled her breasts. She tasted sweet.

Blue cried out, her spine arching. Liam licked his lips and shoved his pants off. His cock bobbed up, already aching.

“Hold her arms, Matt,” he said, biting down her waist. He licked her bellybutton, then slid between her legs.

She panted and licked her lips when he reached her mound.

“Open for me, honey,” he said, looking up her body. Matt was on her knees above her head, holding her arms. His cock jutted out near her cheek. Liam closed his eyes briefly, fighting for control. Blue did as he asked and obediently opened her legs wider. He leaned down and breathed over her mound.

“Come on, Liam,” she begged, twining her legs around his shoulders.

He shook his head, gently scraping at the purple fabric over her clit with his finger. She was so aroused he could see the outline of her bud through the silk.

“God,” she burst out, trying to shove her hips at his face.

He chuckled as he pulled off her panties. “Gorgeous,” he said, taking in her pink pussy. He licked her clit, then gently took the hood between his teeth and flicked his tongue over the tip.

Blue went wild, writhing and crying out. He smiled, then did it again. And again. Her pussy was so wet he had no trouble sliding his fingers inside. He pressed up against her G-spot, then suckled her clit until he sensed she was right on the edge.

“Suck Matt while I suck you, Blue,” he told her.

She looked down at him, green eyes heavy with pleasure. He smiled and she took a deep, shuddering breath, then tilted her head to lick along Matt’s length. Matt leaned over her and groaned.

Liam watched, wondering what his partner tasted like. “Does he taste good, Blue?”

Is she or isn&#039;t she? Blue, a thief with morals, and her boys Matt and Liam, cops with a naughty side, are caught between a cock and a hard place when Blue suspects an untimely pregnancy may be in the cards. How the hell is she supposed to scale buildings and shimmy down air ducts in maternity jeans? But Blue has bigger problems when she gets fingered for murder and has to go on the run. Can her big bad boys in blue stay calm enough to keep her safe and out of prison? BELOVED is book 3 in the Blue&#039;s Boys series, one seriously sexy set of erotic suspense novellas. Ms. Leaf surely outdid herself, and this is one series I&#039;ll put in my &quot;reread when I&#039;m feelin&#039; frisky&quot; pile. While I didn&#039;t get the wild and crazy arousal from this book like I did the others, it was still a fast and fun MMF romp with a dangerous kick. I adore Blue, Matt and Liam, and even though BELOVED was much tamer and toned down from the two previous books, it gave me the &quot;AWWWW&#039;s&quot; the whole way through. With the men&#039;s protective streaks in full force and chemistry out the wazoo, this was a terrific read. Bottom Line: Don&#039;t wait another minute, pick up all three books in this series STAT! - See more at: http://erotic.theromancereviews.com/viewbooksreview.php?bookid=16307#sthash.RNPijpho.dpuf

Beloved is the third book in the Blue’s Boys series and it picks up a couple months after book two ends. I liked that Blue has put a lot of effort in the relationship with her guys and has even given them keys to her place. The sex between them is explosive and the scene at the end of the book made me want to cry. This book is my favorite out the three and I do recommend it highly. Blue&#039;s life changes with two little lines on a pregnancy test. At that same moment she&#039;s being set up for murder by one of her throwing knives. When Liam and Matt run into her home and begin throwing clothes around telling her to pack, she thinks they&#039;ve lost their minds. Only later does she realize that a book she stole in her past has the names of dirty cops, and one of them is after her

Beloved is the third book in Ms. Leaf’s Blue’s Boys series. The action from Book 2 doesn’t slow down one tiny bit – we open with Blue discovering she is pregnant, and the boys immediately rush in with news that she is wanted for murder……….holy knock-me-over-with-a-feather, let’s take a breath, shall we? It seems one of her knives has been found in a body, but Matt and Liam are convinced there is a frame afoot, along with dirty cops pushing hard to arrest her. Interestingly, Blue seems better able to handle the stress than her lovers, at least for a time. After more “hotter than hot” sex, cooler heads prevail and our trio find their way through treacherous, shark (i.e., dirty cop) filled waters. Ms. Leaf leads us merrily through it all with great good humor and better sex (did I say the sex was hot?). We adore Matt and Liam, and Blue, of course – in the midst of a hail of bullets, they all profess their undying love and even manage a proposal. Despite Liam having been shot, our heroes prevail and the happily ever after we all want appears to be theirs……sigh…..well done, Ms. Leaf!

&quot;Beloved&quot; is the third installment in the &quot;Blue&#039;s Boys&quot; series, and I really enjoyed it. In fact, I&#039;ve enjoyed the entire series. It&#039;s clever, well written, funny, exciting and sexy. Blue and her boys are back, and there&#039;s quite the situation going on. It looks like Blue may have committed a terrible crime (not that being a thief is exactly angelic), and Liam and Matthew want to protect her. Topping that off, Blue has a bit of a secret that she&#039;s carrying around, and she&#039;s trying to find a good time to share it with the guys. As always, the trio&#039;s chemistry is amazing, and the their sex scenes are scorching. Matt and Liam are discovering new things about each other, and that adds a very nice layer to the triad&#039;s relationship. Because I don&#039;t want to give anything away, that&#039;s as far as I&#039;m going. Seriously, you have to read this book to appreciate it. In fact, read all three of the books. I wouldn&#039;t consider this a stand alone. There is exposition, but a LOT happened in the first two (&quot;Thief&quot; and &quot;Cops&quot;), and it&#039;s all one continuous story. The books aren&#039;t long, but they don&#039;t feel rushed or like scenes may be just skimmed. Erin Leaf has given us a fun ride with great characters we&#039;d like to be friends with and adventures we&#039;d like to come along on. I am highly recommending &quot;Beloved&quot;. Reviewed by Kenna for Cocktails and Books