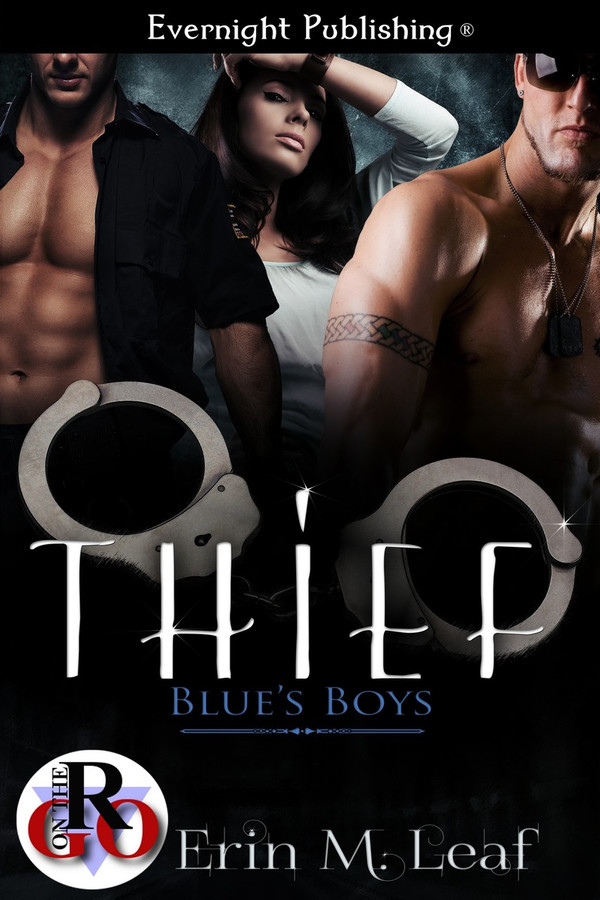 When you're a thief, your dating options are limited. When you're a cop, it's even worse. So what happens when a burglar and two lawmen are trapped together during a heist gone wrong?

Blue has been a thief for years, but she's never been in a situation quite like this. When you're crammed into a tiny space with two sexy detectives, things can get very dicey. Shockingly, instead of arresting her, Matt and Liam ask for a kiss. Blue is happy to oblige. Anything to keep the handcuffs off, right?

Matt and Liam never expect to end up cornered with a gorgeous thief. Liam has sworn off women and Matt can't find anyone he likes better than his partner, so their love lives are nonexistent. When they meet a woman who keeps the same crazy hours as cops do, maybe her criminal career choice isn't the deal breaker it should be?

The sound of men’s voices had him cursing under his breath. He went for his weapon, but Blue’s hand on his cheek firmed, forcing him to hold still. Matt held his arm.

“They have no idea we’re in here,” she mouthed.

He glanced at his partner. Matt’s eyes were dark with arousal and something else. Worry? Excitement? Liam didn’t have the mental capacity to figure it out right now. He trembled, torn between conflicting urges. Should he kiss Blue? Run for the door? Violence trickled along his spine. He needed to do something, or he was going to explode.

Suddenly, Blue went on her tiptoes and brushed his mouth with hers, deciding the matter. The murmur of voices faded as blood rushed to his head, then to his groin.

Fucking hell, he thought, dazed as he tasted her. She must have been sucking on some sort of mint. She coaxed his lips open, then slipped her tongue inside. Liam’s control snapped. He growled and crowded her up against the wall, devouring her mouth. He could feel Matt hard up against his right side, crammed in as they were in this back corner, and that just ratcheted his arousal higher. He put one hand on the wall and slid the other over her neck, but her damned hood was in the way. With another growl, he leaned back and jerked it off her head.

She made a sound that was not quite disapproval as chunks of short to medium dark hair spilled around her shoulders. She had some sort of funky punk cut. It suited her. “Did you have to do that?” she asked.

Liam snorted. “Yeah, I did.” He leaned in again, this time sliding his hands into her hair. She felt so tiny, he was afraid he would break her. He kissed her forehead, then her nose, gently.

“I’m not made of glass,” she said tartly.

Matt choked back a laugh and Liam sent him a glare, but then Blue grabbed his neck and dragged him back down. “Kiss me,” she demanded.

She moaned as his tongue swept inside, silencing her. He pushed her harder into the wall, slotting his leg between her thighs. He was off balance. Surprised. He would have fallen if Matt hadn’t been there. His best friend didn’t move as Liam kissed the hell out of the thief they’d caught. She grabbed his shoulders, giving back as good as she got. Liam nibbled her lower lip, then bit down gently and let her up for air. He didn’t want to stop, but he was startlingly aware of Matt watching them. She let her head fall back, eyes closed as she licked her lips. Liam’s cock jerked and he bent his knee a little more and thrust his hips into hers.

“My turn,” Matt rasped as he leaned over Blue.

Her eyes flew open. She stared at Liam, then shifted her gaze to Matt and smiled.

Matt’s breath huffed out and he moved in, not bothering to shove Liam aside. He kissed her with Liam’s face not ten inches away.

Holy fuck, Liam thought, not having the sense or the will to back off. Matt’s familiar body pushed into his, warm and solid. Liam slid an arm around Matt’s waist and anchored the three of them. The flashlight was dim and angled down in his pocket so he couldn’t see that well, but he could hear them. The wet sound of their lips moving made Liam tremble. He couldn’t bring himself to move.

Blue’s mouth was open and wet. Liam kissed her again before Matt could, deciding not to dwell on how insane this was.

“Don’t stop,” she whispered when he lifted away.

Right from the start of Thief, the story is full of sexual tension and danger. I think the character Blue is so awesome that she defines girl power. She&#039;s not afraid to say what she wants or go after it. I find it so interesting that the author, Erin M. Leaf, went with this route for the story; two cops and a thief. I was really intrigued and couldn&#039;t wait to see how the story unfolds, and what the outcome was going to be. Liam and Matt are cops who sneak into a warehouse to find evidence and have to hide in a closet when they hear people coming. They get the surprise of their life when they realize they&#039;re sharing the closet with a very sexy woman. Things get a little frisky and the story takes off from there.

Sometimes I&#039;m in the mood for a quick, sexy and fun story where I can just truly relax for a bit, and THIEF was exactly what I needed. Blue has one job: get in, steal the diamond back, get out. Naturally, things don&#039;t go exactly as planned when two of the city&#039;s finest show up at the shady pawnshop on their own recon mission. To be fair, the two guys finding her shoved in the back of a big closet wasn&#039;t exactly on the agenda either. The three are forced to hide together when the owner comes back early. With time on their hands, the trio gets very frisky. Despite the dangerous setting, this could be the start of something VERY hot. THIEF, the first book in the Blue&#039;s Boys series, was a quick read that had me smiling and squirming in tandem. As one of my favorite erotic romance authors, Ms. Leaf has the writing chops to back up her sexy ideas, and her characters come to life on the pages. I loved the coincidental second meeting and the ferocious way the three went after each other. And the mild MM activity was JUST enough to let a little drool slip out and make me panting for MORE! Given the ending just when the gettin&#039; was good, i&#039;m now anxious to get my paws on the next installment.

Author Erin M. Leaf proves that good things can come in small packages with THIEF, the first installment in the Blue&#039;s Boys series. The story focuses on a skilled thief named Blue who finds herself trapped in a closet with two cops during a heist gone wrong. The two cops, Matt and Liam, are eager to provide entertainment while they wait for an escape path. When they find themselves stuck in an elevator a few weeks later, the chemistry is still going strong. Although this might not be a storyline that contains a lot of depth, the heat factor more than makes up for it. Sparks fly among all three characters, setting the stage for some rocking ménage action. The only question is whether two lawmen can reform Blue&#039;s penchant for having sticky fingers. Something tells me it will be a thrilling adventure.

I must admit that it was a bit of vanity that inspired me to pick up Thief by Erin M. Leaf as the heroine of this erotic short read shares the same name as yours truly. Taking a peek at the blurb, I discovered that the heroine not only shared my name but found herself in a predictament that I have often day-dreamed of finding myself in - trapped in a confined space with two gorgeous men. How could I possibly resist? This read was short, sexy and sinfully satisfying! The pros: Blue is an older woman (late 30s) - kudos to the author for giving us older gals our spotlight. Blue has made a less than squeaky clean living for herself by stealing back stolen goods. Anyone who follows my reviews knows that I do so love my &quot;bad girls&quot;. Blue takes advantage of her situation with Matt and Liam without regret or apology. A sexually confident woman who doesn&#039;t need a man but will most definitely go after what she wants - which happens to be a sexual tryst with two hot detectives? Thumbs up. Matt and Liam perfectly compliment each other and our heroine by offering one lover who is gentle and thoughtful and the other who is dangerously sexy. Committed to their job and to each other, they&#039;ve found it difficult to find a woman who understands the demands of their job as well as their loyalty towards one another...until Blue. The cons: I&#039;m not sure how long I&#039;ll have to wait for Blue&#039;s Boys #2. I can&#039;t wait to see where the author goes with this merry trio. If you haven&#039;t added this to your reading list - you should!

Oh what an adorable book “Thief” was. Don’t get the wrong impression when I say “adorable”. I don’t mean it was cute like a little bunny or kitten. To me it was cute due to the chemistry of the three main characters and the humor. I laughed through the whole story. Blue and her boys, Matt and Liam are very sexy together, and the situations that they find themselves in are just awesome. I don’t want to give away spoilers, but let me tell you that Blue is a thief…a very good one. Liam and Matt are cops. Through a hilarious set of circumstances, they find themselves locked in a dark closet in a pawn shop together. They waste no time. Honestly…no time at all. They just click, and it was so cool to be able to witness their “relationship” develop right there in the dark. Even though this is story is a little over 13,000 words, there is a lot of content. It’s not the length. It’s not the size. It’s…blah, blah, blah. You see where I’m going with this. These three are so hot, my Kindle burned my fingertips. It was fun to see the interaction between Matt and Liam. They’re partners, and they’re the best of friends, but being with Blue helps them to discover a new layer to their relationship. They’re a little more than surprised, but they decide to roll with it as best they can, and that made “Thief” all the better for me. I have been reviewing quite a bit of books from Erin Leaf as of late. I only discovered her a short while ago, and I’m making my way through her whole library because I love her writing style. She’s versatile too, giving us MM, MMF, MF, supernatural, action, and sci fi. All of which are interesting, romantic, and sexy. I highly recommend this book…and all of Ms. Leaf’s other tales as well.