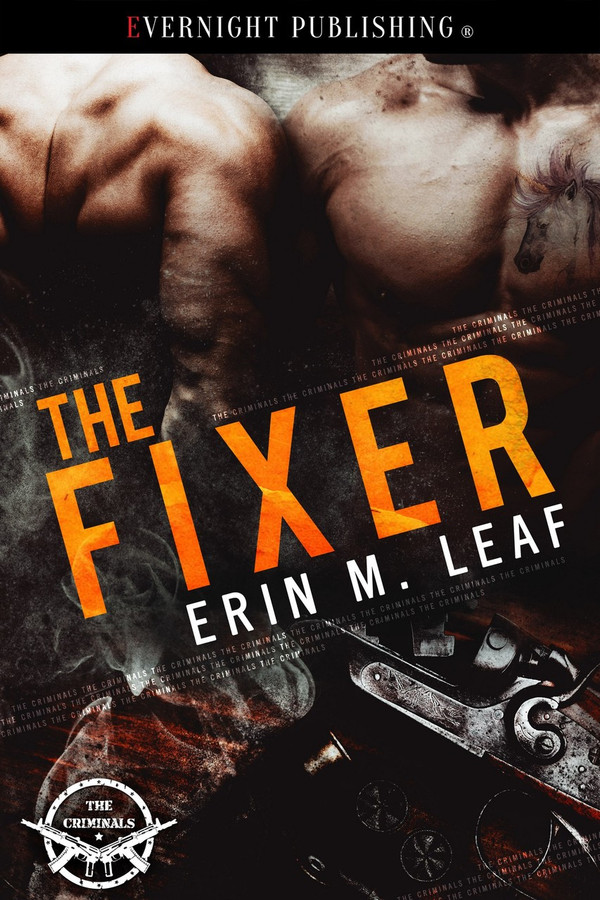 When Zero Graham wakes up in the hospital, he has only one thing on his mind: revenge on the mastermind who shot him and trashed his home. He's the best fixer in the business, and that means he has a reputation to uphold.

Julian Amon doesn't want to check up on his mother's patient, but he can't say no to her, and he finds the older man intriguingly hot. His decision to tag along when Zero checks himself out of the hospital borders on crazy, but the older man interests him, and Julian has always enjoyed a good mystery.

Zero doesn’t want or need a babysitter, but Julian’s physical competence and lack of fear push all of his buttons in exactly the right way. Violence is his kink, and the younger man doesn’t seem to mind the scent of blood, but will Julian be able to handle the pressure when Zero closes in on his enemy?

Zero couldn’t help it. He leaned in and cupped Julian’s cheeks. Fine auburn stubble pricked his palms. He loved it. “Darling, how enterprising of you,” he murmured. He really liked this man. Julian’s delightful combination of youthful innocence married to a startling level of self-confidence flat out did it for him. Instead of jerking his head away from Zero’s hands, Julian’s skin heated more. Zero watched while the younger man’s face flushed a deeper pink. “Lovely,” he murmured.

“What the hell, Zero?” Julian stared at him.

Aw, fuck it. Zero moved closer, crowding Julian up against the bathroom door. It didn’t take much movement to pin the younger man there. His motorhome might be a luxury model, but it was still a small space for two large men. “Are you quite certain you want to stay here with me, Julian?” he asked, giving the man one last exit possibility. “I can’t guarantee that you will remain innocent under my care.”

“Innocent?” Julian laughed. “I’m not innocent, and neither am I in your care. For the last time, I’m a grown man. I choose where I want to be.” Julian leaned into Zero’s touch, eyes going heavy lidded. “You keep making the assumption that I don’t know what I want.” He put his hands on Zero’s wrists. “I’m bisexual. I’ve never been in anyone’s closet, let alone my own. Stop pretending that you’re in charge of my life, Zero.”

Arousal slammed into Zero, despite his exhaustion. Most men looked at his size and ran the other way. The ones who liked their lovers big ran away when they discovered Zero’s brain was just as impressive as the rest of his body. Julian, however, hadn’t shied away even once. Delight warred with the violence Zero worked so hard to keep in check. He wanted to grind himself into Julian until they were both dirty and aching. Zero hummed under his breath, and leaned in. “I’m going to kiss you now. And you’re going to like it.”

“So much talk,” Julian whispered, but Zero’s mouth shut him up.

Julian froze the moment Zero’s lips touched his. Instead of devouring him, Zero coaxed him open gently. Instead of biting, Zero licked and nibbled until Julian’s need for a solid touch burned through him. He yanked Zero closer, groaning when the man’s heavy body pressed him to the wall. “Fuck, Zero. Stop with the teasing.”

Zero lifted his head. “Oh, but teasing can lead to such delightful things, Julian.”

Julian answered by biting Zero’s bottom lip. “You talk too much.” He knew he was asking for trouble by hooking up with a guy recovering from a gunshot wound, who also had a lot of unfinished and probably illegal business to deal with, but fuck if he cared right now. He wanted Zero. He hadn’t felt this revved up by a simple kiss, like, ever. So what if I get myself in trouble? I gotta live my life, right? He licked inside, chasing the fading taste of beer on Zero’s breath.

Zero shuddered, hands going around Julian’s neck. He threaded his fingers up into Julian’s hair. “Mmmm. You taste like a very, very bad idea.”

Julian groaned, then ground his cock into Zero’s hip. “Don’t overthink this, Zero. We could have a good time together.” He wasn’t a small man, and he knew he was in fantastic shape, but his lean muscles were no match for Zero’s bulky frame. Decades of some kind of weight lifting had given Zero enough mass to shoulder his way through just about anything. He locked one hand in Julian’s hair, and then he used the other to jerk Julian closer. Julian let him. Hell, Julian liked it.

“Someday we’re going to fuck and nothing will be the same ever again,” Zero murmured.

“Promises, promises.” Julian smirked, grinding against Zero until his dick hurt with the pressure. “You feel like a guy in need of some relief.”

“Fuck.” Zero’s eloquence seemed to have completely deserted him. Julian let Zero manhandle him down the hall to the master bedroom.

“You’re going to get us both killed,” Zero muttered, muscles bulging as he moved.

“But what a sweet way to die,” Julian replied, not giving a shit about Zero’s paranoia. “You talk too much.” He inhaled, catching a hint of the man he knew lay under all the hospital scents.

“I know you’re going to fuck up your incisions if you keep that up,” Julian said when Zero shoved him up against yet another wall.

“Shut up.” Zero kissed him again, savagely this time.

When the kiss ended, Julian gasped for air. “We definitely doing this then?” he asked, trying to get his bearings.

Zero stared at him, dark eyes gone black with lust. “You better be very sure, my dear.”

The Fixer” by Erin M. Leaf centers around Zero, whose gritty and dangerous life as a fixer intersects with Justin, whose favor for his mom develops into a life-changing situation. Despite their apparent differences, the two men make a connection, but the danger that is a hallmark of Zero’s life may be too large an obstacle to overcome…if they can even survive long enough to explore the possibilities. This dark m/m contemporary story has an unlikely hero but he is portrayed as having such charisma that one can’t help but admire his efficiency and ruthlessness. I was fascinated by watching the relationship evolve and by the way the two men complement each other. Justin has unexpected depths and I like that he’s not a naïve young thing who is caught in Zero’s spell. Those who are squeamish should be advised that there is violence throughout the story but it provides a great picture of the harsh world Zero lives in. I enjoyed the glimpse I got into their world (and the heat between them) and I hope to see them again in a subsequent story.

Zero fascinated me in book one of this series. He’s a fixer, or in better words, he handles assassination contracts, he’s a fence for stolen goods, and he basically will handle any problem someone has. Right now, though, he’s about to teach a mobster what happens when he double-crosses him and, to be honest, I was really looking forward to the lesson. Zero and Felix have been best friends ever since Felix saved Zero from a pack of bigots during high school. Zero doesn’t exactly have too many friends… mostly he has people who owe him “favors” which is how he knows Julian’s mom. Ariana is an emergency room doctor and her husband served with Zero, and also saved Zero’s life. When her husband died, Ariana needed some help dealing with the military, and so now she occasionally gets a call from Zero regarding health issues. Not that he calls her often, but when Robert Edwards’s goons and nephew break into Zero’s home - his safe place - and shoot him along with killing Rick’s younger sister… well, not only does the mobster sign his death warrant but Zero has to call Ariana for help. She comes with Julian to help her as he knows basic emergency medicine. Julian is attracted to the gorgeous, muscular, bald man even as Zero is lying on the floor with a gunshot to his chest. So when his mother asks him to check up on Zero in the hospital, Julian doesn’t hesitate. Of course, Julian wonders if he has lost his mind once he accompanies Zero – who checks himself out of the hospital – and agrees to help him with some tasks, seeing as Zero is not healed yet. Julian has an inkling of what he’s getting himself into but the true reality is one it takes a bit of time to wrap his mind around. “You’re a fixer. You work with criminals.” He knew saying it out loud made him sound slow, but he needed to hear it. “You knew that,” Zero said gently. “I am a criminal, my dear. I make no excuses for my choice of career.” This was an insanely hot and very erotic story. Zero and Julian are combustible together and the fact that both of them are attracted to danger made the entire ride even more incendiary. I truly enjoyed the revenge outcome although Zero wouldn’t refer to it that way. In his mind taking care of Edwards is business and protecting his reputation. I also loved the twist the author threw in there and the ending was wonderful. I’m looking forward to another installment as this series is quite fun!

as always I really enjoy reading all of your books, your latest The Fixer was really good, and as always I&#039;m looking forward for more. thank u

Great read. I read book one and then bought and read book 2 within a day. Fun hot read with an interesting storyline. I am looking forward to book 3. I loved Zero and his tough attitude but I think he met his match in Julian. I loved the twist with Julian and it added to the enjoyment. Would highly recommend.