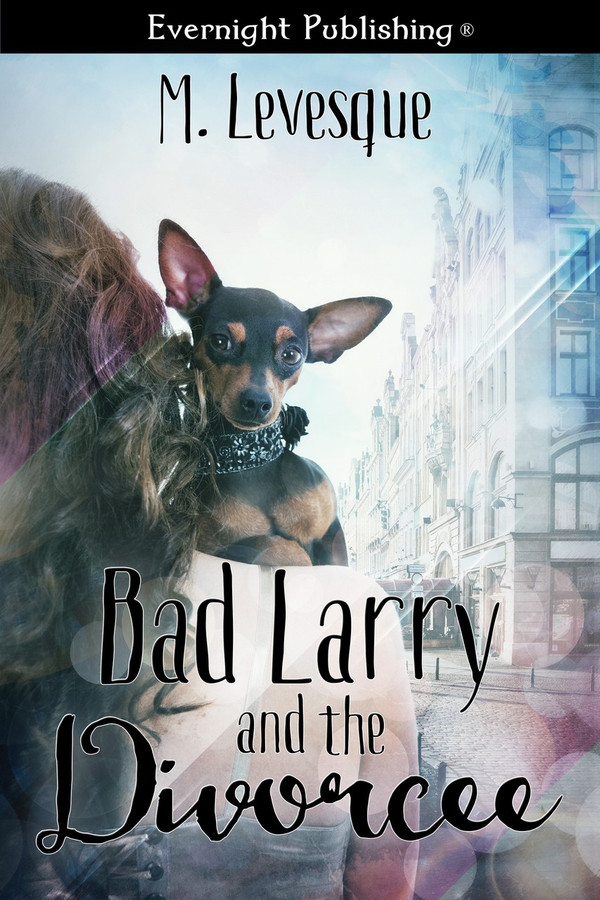 Riya’s divorce gift to herself is to adopt a dog. Bad Larry and Riya meet at an animal shelter and quickly bond over their mutual hatred of men. Riya promises the little dog that she’ll never let anything bad happen to him again, if he promises to make it hard for her to bring any men back to her apartment, in a moment of weakness.

Jaden is investigating the murder of one of Riya’s high school classmates and after a strange first encounter in a public bathroom, he asks her out. She shoots him down but he’s determined to get to know her better, despite her warnings of owning a dangerous, man-hating dog.

Riya has no choice but to let Jaden into her life when she starts getting threatening letters from the killer but are she and Bad Larry ready to give Jaden an honest shot?

He peered at me through narrowed eyes. “I’ll get your purse but just so you know, we’re still going out, at least once. I like you.”

“I can’t, I’m already in a relationship.” I said, desperately. I could feel my resolution dissolving very quickly under his blue-eyed stare.

“Are you in a relationship with a woman because you just told me you’ve given up on men?”

I chewed my bottom lip and his eyes darted down to my mouth. Just the fact that he noticed my mouth turned me on. What was wrong with me? “No, not with a woman. It’s actually more of a really jealous roommate situation, than an actual relationship.”

“Cats and goldfish don’t count,” he said, cueing in on my vagueness.

“Ha, joke’s on you, he’s a Doberman named Bad Larry and Larry likes men less than I do.” Bad Larry is actually a twelve-pound Miniature Pinscher but he really doesn’t like men and he doesn’t really know he’s only twelve pounds and he has a rap sheet to prove it.

I got Larry when the divorce was finalized. My ex didn’t like dogs so in an act of admittedly impulsive rebellion, I got Larry. Larry was a rescue from an animal shelter and when I saw him for the first time and discovered that he didn’t like men either, we became best friends. I promised to never let anyone hurt him again and he promised to make sure that in a moment of hormonal weakness, I didn’t let any men come back to my apartment.

I’d witnessed Larry in action twice. Once when the vet was checking him over before I brought him home and once when I was taking him out to pee and a construction worker tried to pet him. Larry is now on a city mandated bad dog list, meaning that he has to behave himself from now on or he could be taken away and put in puppy lifer prison.

Jaden shook his head at me and returned a moment later with my purse in one hand and his phone in the other. “I have to go right now but I put my card in your purse just in case you change your mind about Skittles.”

I winked at him. “You got it stud, but right now I have an emergency date with the box of baking soda currently deodorizing my fridge.”

He smiled broadly at me. “Tell Bad Larry I said hello.”

“Bad Larry doesn’t need to know about you. Trust me, it’s for your own protection.”

As always M. Levesque&#039;s brings out the good times in each of her stories. While there is mystery, suspense, and hot sex she always brings laughter and joy which is one of the things I like most about her work. Everyone needs this. Well done the story was great as well as the characters especially Larry he is one of a kind he reminds me of my Chihuahua Charlie.

The cover for Bad Larry and the Divorcee is what caught my attention but the writing held it. I loved Bad Larry.

This book was hilarious when it came to the titular “Larry” – a little miniature pinscher who absolutely hated men. He had a real attitude and was a good protector…for a dog that weighs less than many purses do, what with all women carry around in their purses (me included). Riya is attending the funeral of a high school classmate when she meets Jaden, in a very not-ladylike-position because of a cream incident gone very wrong. He offers some medical advice, being an EMT among other things, and gives her his card so they can talk. Larry does…bad things to the card. Very bad things. Luckily Jaden tracks her down anyway. The mystery involved was minor, though I enjoyed seeing and finding out just who was behind the deaths. I loved the secondary character of Jaden’s mother (who really was a hoot in her own way), and seeing Jaden and Riya get together finally when everything’s solved. These two made a cute couple, er, trio with Larry. Definitely check this out if you want to giggle over the antics of a dog!

I was given an copy of this book in exchange for an honest review. After her divorce, Riya decides to adopt a dog. Bad Larry already has two strikes against him but Riya promises him that she will not let anyone hurt him again. Bad Larry protects Riya from making bad choices with men. Then they meet Jaden and they both have to rethink their stance on men. I enjoyed reading this book. It would make a nice beach read this summer! And it makes me want to rescue my own Bad Larry!

The Fox and the Hound by M. Levesque

Bad to the Bone by Sam Crescent