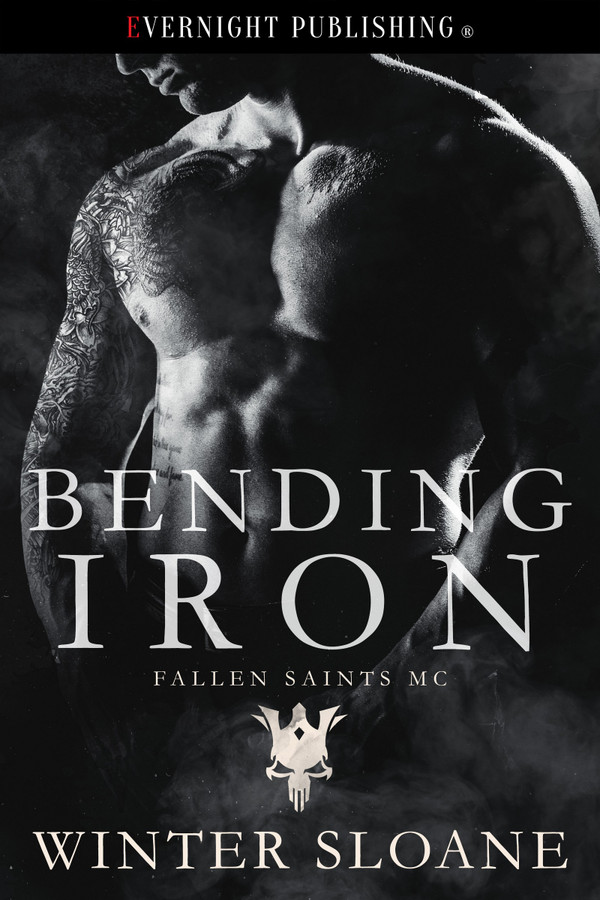 Amber: Iron’s not a good man. I barely escaped one monster only to run right into another. A biker covered in ink with hard eyes that go soft at the sight of me. Iron’s past might be defined by violence and bloodshed, but deep down, he’s a decent man. A protector to the core. One kiss, one touch and I come undone. I know he’s bad news but I can’t seem to shake him off. The more I get to know him, the more I want him, but what kind of future do I have with a biker?

Iron: I can’t fall for Amber. She’s too young, too damaged, and too perfect for someone like me. Amber’s everything I wanted in an old lady. Before her, I never once thought of settling down. She’s the sunshine to my darkness, but Amber’s also hiding secrets. Secrets that could make or break us, but I’m not daunted. In the end, I’ll keep her and make her mine.

“I should go,” she blurted.

“Nah. Why don’t you stay a little? I can show you a good time,” Daryl was saying.

He found himself walking in their direction. All he wanted to do was wrap his arms around Daryl’s neck and throttle him. That would make the pushy bastard back off. Iron couldn’t forget the last time he lost his temper. When he’d been younger, he’d been headstrong and made reckless decisions all the time. At his age, he prided himself on having better control over his emotions. The younger MC members often relied on him for advice. They looked up to him.

“She said no. Didn’t you hear her?” Iron practically barked out the words. Heads swiveled in their direction.

The woman looked up at him and paled. She probably only saw his size, his tattoos, and the MC patch on his jacket and concluded he was up to no good. Just like everyone else. Well, it didn’t matter. Once he got this bastard off her back, he’d go his own way. She’d do the same.

“Hey, buddy. Why don’t you bark up a different—” Daryl couldn’t finish his remaining words. Iron shoved him hard against the wall.

“Don’t make me warn you again. Back off,” Iron said. He leaned in close, so only Daryl could hear his next words. “She’s mine, you understand?”

Iron knew he was making a commotion. This wasn’t like him at all. He seldom lost his cool. Usually, it was the younger and rowdier members of the MC who caused trouble. Not him. Iron took deep breaths and released Daryl.

“I get it. She’s yours. The bitch ain’t worth it anyway,” Daryl grumbled.

“What the fuck did you call her?” Iron demanded. Someone grabbed his arm. The woman. That gave him pause. He figured she would’ve taken the opportunity to run by now. She looked up at him with those big and grateful brown eyes. He sucked in a breath.

“Thank you,” she whispered. She must’ve realized she was still holding his arm because she dropped it. “I didn’t know what to do.”

“You could’ve told him off.”

She slumped her shoulders. Iron regretted his words immediately. He remembered asking his momma once why she never fought back. Her answer remained ingrained in his head.

Because if I do, it’ll only get worse.

The woman tugged at the collar of her turtleneck, a nervous gesture, Iron realized. The sight of the fading bruises there only incensed him further. Was she running away from the bastard who left those ugly souvenirs on her? She came here alone, after all.

She blinked up at him. Iron wanted to punch himself when he realized how he sounded. What his words implied.

“I’d like to walk you back to your hotel, or wherever you’re staying,” he said.

“Oh. Okay. I just need to pay for my drink and grab my coat,” she said.

“I have that covered.” Iron slipped a few bills on the bar, then walked her out of the bar. Daryl, he noticed, had slipped out like the weasel he was. They passed by the table where Chains and the others were. Chains let out a whistle. Iron glared at his MC brother and gave him a silent warning with his eyes. He knew exactly what they were thinking, but they were wrong. Iron had no designs on this woman, no matter how tempting she was.

If he wanted sex, then one of the club whores back at the MC clubhouse could satisfy his needs. This was different. He just wanted to see this woman, this stranger, safely home. They finally exited the crowded bar.

Amber escaped a horrible life and randomly picked a new destination to start over. Her rule is no man...been there hurt by that. But when a sexy biker comes to her aid its all over. The chemistry and attraction is undeniable and intense. But romance doesn&#039;t go easy for them. Can they get through it or is the pain of the past still there?? I received an ARC for an honest and voluntarily review.

It was an enjoyable yet sweet read! Amber swore off men after escaping her last bad relationship but it was interesting to see Iron patiently breaking her fears by focusing on starting a good relationship with him. I received a free copy of this book via Booksprout and am voluntarily leaving a review.

I really enjoyed this &quot;Fallen Saints MC&quot; story. It is the fifth in the series but a stand alone read with connected characters. This is Iron and Amber&#039;s story. It is a fairly short, quick and fast paced read with some suspense, action, danger, passion, angst and romance. Amber, after a tragedy, is escaping an abusive man. She picks Redemption, a small town, to start her journey. She does not plan to stay long, that is until she meets the formidable Iron. Iron sees her at the bar where she has become the receiver of some very unwanted attention. He helps get her to safety. He recognizes what she has been through. The attraction between the two is instant. I love Iron! he is so patient, kind and becomes her anchor. Amber finds some much needed safty in his arms. Such a good read! *I voluntarily read and reviewed an advanced copy of this book.*

This is a MC Biker love story between cool headed Iron the biker and the run away from violence Amber. I loved that Amber is stronger than she looks or knows after her ex did a number on her and all the pain she has gone through because of him and all it takes is Iron showing her there is more to life than just existing and running. I loved how protective they both become for each other and how the ex gets what is do him. I can not wait for the next book.

Owned by the Hitman by Winter Sloane