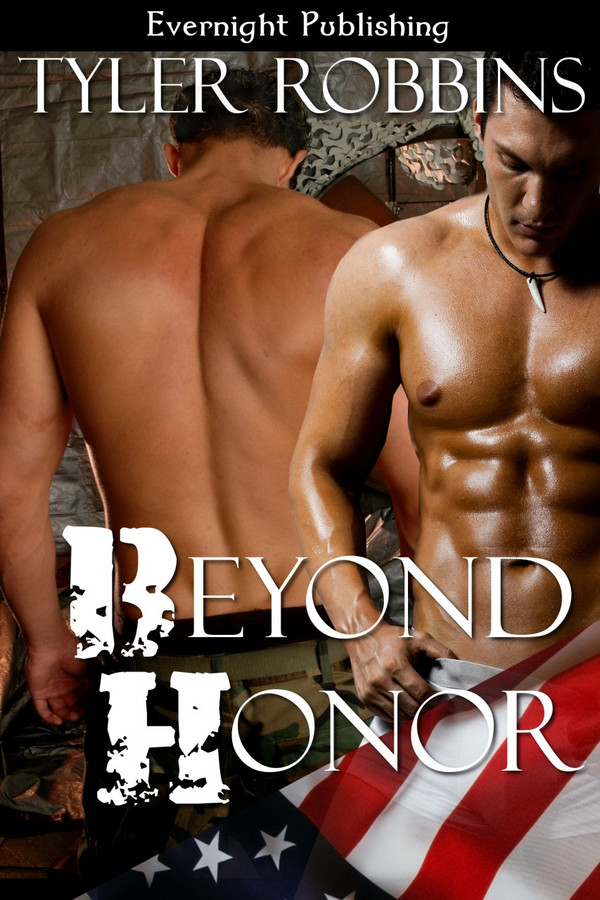 Army Medic, Private Michael Crest, is quite content in his life with the exception of one thing—he’s in need of a good man and has his sights set on another medic, Specialist Jared Prophet.

The problem? Jared’s in deep denial about his sexuality.

As a tropical storm hits the Texas Gulf Coast, the two men give into unbridled passion. But more than the weather gets rough when the storm passes and Jared learns his parents are among the missing.

Can the lovers endure the fallout or will unearthed truths prove more devastating than any natural disaster?

After all, just because they aren’t gonna ask, doesn’t mean they want you to tell…

Michael eased up onto his elbow, painfully mindful of his probable injury. “I’m glad my busted ribs are amusing.”

Jared rose on all fours and crawled over to Michael, stifling his laugh. “I doubt they’re broken, but I’ll check them out to make sure, then get you back to the infirmary.”

Jared knelt before Michael, towering over him.

As Michael looked up, the morning sun radiated over Jared’s head, and a surge of warmth ricocheted across Michael’s skin.

“If they’re broken and you move the wrong—”

“I know, I know. It could puncture my lung.”

Jared cracked a smile. “Right, so take off your shirt, and let’s take a look.”

Michael’s heart raced as he managed to fight through the blast of pain and sat up. He leaned against the giant tree that had stopped his fall and braced for the uncomfortable moments he knew were about to occur.

Michael figured Jared would turn away or say something as he lifted his t-shirt up over his torso, but instead, Jared’s hands trembled as he reached down and helped Michael draw it over his head without saying a word.

Michael glared up at Jared, half expecting him to disappear. He bit his tongue, holding back any sound capable of breaking the spell Jared seemed to have fallen under.

Jared eased closer, still on his knees and slowly lifted the bottom of Michael’s wife-beater, then pulled it up and over his head. For a few intense seconds, Michael sat before him, his bare chest about to explode from his heart pounding furiously inside.

Jared licked his lips and moved toward Michael, as if in slow motion, until the palms of his hands were flush against Michael’s chest. Michael’s nipple beaded as Jared’s fingers lightly skimmed over his flesh.

It was then that Jared finally looked Michael in the eyes, and Michael held his breath as a silent conversation passed between them.

Jared’s jaw flexed taut, and he lowered his head so slowly, Michael was sure he would lose his mind from the sheer thrill of anticipation. He’d forgotten all about the pain, and Jared was definitely not examining his ribs.

Michael lifted his chin, and before he knew it, Jared’s lips grazed his.

Jared snapped back as though he’d been zapped by lightning. His bright blue eyes smoldered, and then he closed them and pressed his mouth to Michael’s once again. This time though, he didn’t stop.

Michael acted on desires he’d hidden for weeks and moved his hand behind Jared’s head, drawing him even closer. His tongue plunged in deep, and his cock hardened at the sound of Jared’s deep moan.

Jared pulled him in tighter and kissed him harder, so hard their teeth clanked together sending a little twinge of discomfort shooting across Michael’s gums. The faint metallic taste of blood filled his mouth, but he ignored it. Nothing was going to interrupt.

He struggled to breathe as Jared’s hands began to wander. He reached down and grabbed Michael’s hand and without hesitation planted it right across his cock. The long, thick shaft bulged behind Jared’s zipper, and Michael struggled to contain his delight.

Jared rose, towering over Michael like a god demanding adoration.

Michael had never done this, but he’d never wanted anything more. He fumbled with Jared’s zipper and unfastened his pants, panting like a kid in a candy store as he freed his prize.

Jared clasped Michael’s shoulders then, nudging him back, his eyes widened, and a look of sheer panic flashed across Jared’s face. “So help me, if you ever tell—”

Jared cupped the back of Michael’s neck and brought his head toward Jared’s crotch.

Michael leaned in to the swollen prick pulsating in his hand. The instant his lips touched the bulbous tip, the salty-sweet taste of pre-cum filled his mouth, and Jared’s entire body seized under Michael’s touch.

Unsure of what to do exactly, Michael followed his instincts and eased the heated shaft deeper into his mouth, then began to slide it in and out, leaving behind saliva mixed with Jared’s juices up and down his cock. His sensitive tongue caressed the deep, pulsing veins on the underside of the shaft, encouraging his own cock to swell in his pants.

Jared grunted. “Fuck! That feels good.” He rubbed the back of Michael’s head.

Michael tuned him out and concentrated on sucking even harder and faster until his hollowed cheeks were dampened from the tasty juices seeping from Jared’s cock.

The sound of those words excited Michael to the point of explosion. He slid his hand toward the base of Jared’s shaft and began to stroke him.

Michael looked up, and Jared glared through hooded eyes with a look of sheer ecstasy on his face. Michael ran his tongue over the tip as he jerked him off, staring up at Jared the whole time.

Jared opened his mouth, and his breathing became even more labored. He moved Michael’s hand and mouth away and began to stroke his own cock, then bent over and kissed Michael, still holding him by the nape of his neck with his other hand.

A warm sensation shot across Michael’s bare chest as Jared came, and then, as though he’d lost all energy, he leaned onto Michael. Jared’s heavy panting filled the air with huffs of satisfied release.

Michael wasn’t sure how long they lingered there in the quiet dawn, but he was sure he’d never forget a second of what had occurred. He’d given his first blow-job, and it was with Jared Prophet of all people.

Army medic Michael Crest is living his life. He has a respectable job, good friends. Now if only he could find a good man to love. Specialist Jared Prophet would be the perfect candidate. He&#039;s gorgeous, strong and very sexy, just the man he&#039;s looking for. Unfortunately, Jared is still questioning his sexuality and dealing with fears of being outed. Even knowing this, Michael gets intimately involved with Jared. When their up and down relationship is threatened, Jared must make a life altering decision. I was cautious about this one even though I really wanted to read it. There are many m/m romances with this particular theme being written mainly due to the relevance in today&#039;s society. I was curious to see the author&#039;s take on it, especially since I haven&#039;t read her work before. I give her props for writing a well thought out emotional read that gives you some insight on what many in the LGBTQ are dealing with. A great cast of characters from main to supporting with each having a story to tell. This blending in itself make it an unforgettable book. The struggle that Jared goes through is wonderfully written and gives a vivid picture of the struggle of many. I thought this was a great example of not only love between lovers but the love between friends is also well represented here. In addition to all this good stuff, you have some really tantalizing sex scenes. I would say this one is definitely worth a read.

At the surface, Beyond Honor is a story of two men finding love amongst each other, coming to terms with it, and learning to appreciate it. However, if you go deeper (and honestly, who doesn&#039;t want to go deeper?), it becomes a very interesting character study based on those individuals threatened and affected by Don&#039;t Ask, Don&#039;t Tell (DADT), as well as that ever constant struggle for parental approval. Overall, this was a fantastic read. The writing is well structure and the speed of the story is constant, all the way to the end. I look forward to reading more of this author&#039;s work!