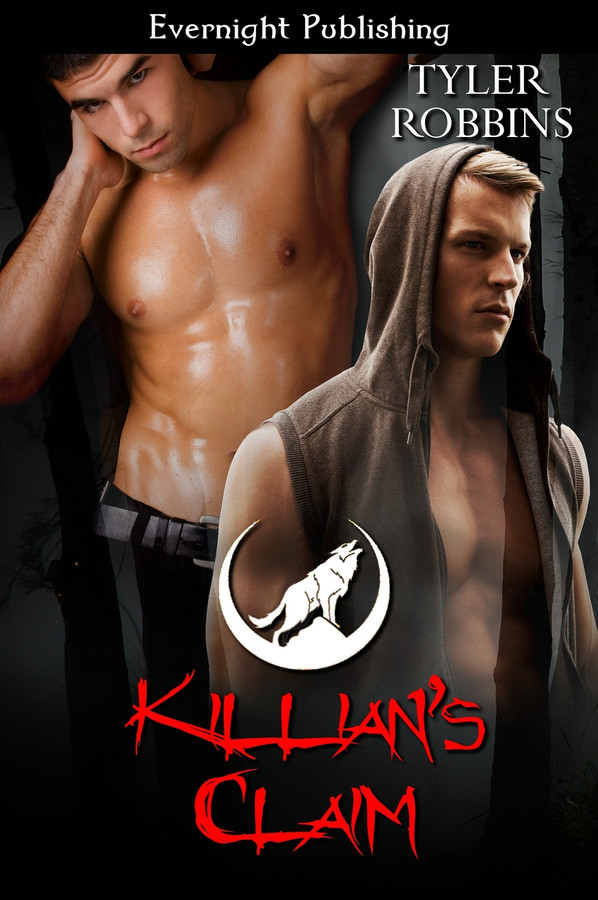 Six years ago, Quinn Kelly barely escaped the brutal murder of his parents. Now the lone-wolf is searching for a place to belong. Well aware of his proclivity for men, his nomadic life hasn’t allowed him to find anyone to call his own—until now.

Wolf-shifter and future alpha of his own pack, Killian Masters wants nothing more than his father’s approval. After meeting Quinn, he’s more determined than ever to make his father see who he is and how deeply he loves.

Captivated by their growing passion, the young lovers have a rude awakening when the vengeful alpha who murdered Quinn’s parents finds him, and vows to destroy anyone who gets in his way.

Some say the battle between good and evil is determined by which power is fed the most, but in nature, no power compares to that of an alpha’s claim.

Read Call of the Wolf, 1 in Alpha's Claim: Manlove Edition

He stood frozen in place, fists balled tight and his cock throbbing with ungodly need. He’d never been balls deep inside another man before, but the longer he stood there, the more he wanted it.

Killian kissed the curve of Quinn’s neck then began to suckle.

Quinn squeezed his eyes shut. How much more could he possibly take? Chills skittered across his skin causing ripples of goose-bumps to coat his tingling flesh. A sensual moan vibrated in his chest as he shuddered from the thrill of Killian’s touch.

Killian pulled away and looked him in the eye. “Follow your instincts.”

Quinn took a deep breath then clutched the back of Killian’s neck. “Like this?” No longer able to hold back, he lunged forward, engulfing Killian’s mouth with his while pushing him back toward the sofa.

Killian tripped over his own feet, and toppled onto the couch.

Killian sat up, licking his lips, his gaze still fixated on Quinn’s crotch.

Courage he hadn’t expected suddenly engulfed Quinn as he offered his cock to Killian. “Take it.”

Quinn’s eyes rolled back, and his hips naturally bucked as Killian removed his cock from his jeans. Warm hands gripped it firmly, but not too hard. Quinn sucked air in through his teeth, shuddering as Killian began to stroke him. Slow and easy. Up and down.

He jolted when Killian took him in his mouth, hot and wet. “Fuck.” Never had anything felt so good. He peered down, then twisted the back of Killian’s hair into his fist, guiding his head back and forth as Killian took more and more of his cock into his mouth.

Killian gripped the base of Quinn’s shaft, quickening his pace, sucking and stroking simultaneously.

Quinn’s knees buckled, and he grabbed Killian’s shoulders to steady himself as heat flooded his groin. His cock pulsed, and he struggled to hold off as long as he could. He wanted so badly to lose his load in Killian’s mouth, but doing that would end the pleasure far too soon.

Continuously running from an unknown threat doesn’t leave much room for relationships even romantic ones. So Quinn spent most of his life alone and scared in the world. Then Killian came along and changed off of that because something draws him that he cannot seem to resist. Killian has a strong, calm and authoritative feel about him. He wasn’t your typical alpha that is confident and cocky. It was a good change to the type of alpha I am use to seeing. It was refreshing to see something different, plus Killian still very much protected those around him, as well as his father who seems to only push him away. Quinn’s character at times I had trouble identifying with. Some he to seem to have some alpha qualities, even though he did not identify as an alpha. It was clear to me that he let Killian take the dominant rule, for me someone is usually an alpha or not by nature, not they allow someone to be alpha. The conflict in the story really intrigued me. I found that more entertaining than the romantic development. I liked the mystery around Quinn’s parents as well as who it was trying to find him. It made me want to know more, and help Quinn find out the mystery behind his family. Even in the end I hoped there was more to the story cause I did not want it to end.

Killian Claim is the second book in the Call of the Wolf series by Tyler Robbins. This book might be part of a series but can be read as a standalone novel with ease. Quinn Kelly is a lone wolf whose parents were killed when he was sixteen. Now six years later he is just barely scrapping by. He is very good at keeping the hunters off his tail. Quinn was not raised with a pack beyond his parents so he is at a loss as to identifying other shifters like himself. Killian Masters is a wolf shifter and the future alpha of his own pack. Killian’s biggest issue is that he and his father are at odds because of his sexuality and Killian unwillingness to hide it. Killian is a strong and levelheaded man. He seems to have all the qualities of a future alpha. The connection between Killian and Quinn is blistering. Killian seems to fall for him almost at first sight of Quinn. I loved that Killian lets Quinn adjust to life within a pack as well as protect him. The sex scenes were intense. This book is well written with a believable plot. The ending was not as predictable as I first thought. I liked that Ms. Robbins kept me on my toes all the way through. The main and secondary characters are interesting and engaging. Overall, this was a great book.

The writing is flawless. It’s easy to follow, perfectly paced and wonderfully plotted. Quinn is a shifter but his parents were killed and he is now on his own. He’s a loner, scared to stay in one place for too long. That is until he meets Killian. Killian is also a shifter with his own set of issues. Together they face down their problems while trying to find their happy ending.