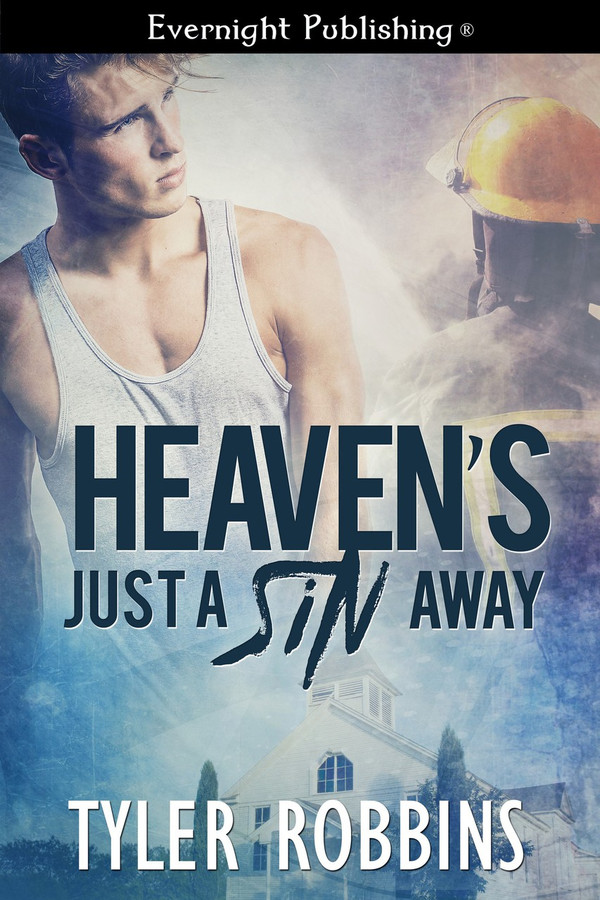 Having just lost his mother to cancer, eighteen year old Blueford “Blue” Mason returned to his hometown of Danville, Texas to live with his reticent grandmother. The two struggle to bond while Blue undergoes a metamorphosis into manhood, discovering new things about himself, his sexuality, life, love and even heartbreak.

After leaving his former fire department due to intolerance of his sexuality, twenty-three year old, Jack West moved to Danville to work as an EMT for his uncle’s small fire department. He’d resigned himself to living a quiet life alone until Blue came along and turned his world upside-down.

Will the young lovers find acceptance in Danville or will shameful secrets from the distant past set this town ablaze when the people around them are forced to face their own shortcomings? Heaven’s just a sin away, especially when every sin is created equally.

Blue drew in a deep breath and gripped the strong hand holding his. He peered into Jack’s dark brown eyes as they darted back and forth.

“Don’t know what?” Blue had to know. He had to hear the rest of the sentence. If he didn’t, he was certain he would explode.

“I don’t know what I was thinking just then.” Jack gestured to the space between them now. “I didn’t mean to cross any lines, man.”

Blue shook his head. “You didn’t.” He really hadn’t. In fact, Jack hadn’t even come close to crossing lines. Not like Blue wanted him to, anyway.

“Oh, shit!” Jack charged past Blue and reached for the now crackling frying pan with the steaks. Smoke and steam billowed from the top. “Damn. I think I burned them.” He set the pan aside and examined the steaks by lifting the edge of one with a fork. “Crap. There went dinner.”

Blue laughed. “You can save babies from burning cars, but you can’t cook up a couple of steaks?”

“Hey, I was dealing with an emergency. You nearly cut your finger off.”

They both laughed as Blue glanced down at his finger. “It’s not even bleeding anymore.” As their laughter quieted, Blue couldn’t help himself. He had to say something. “You’re not, you know.”

Jack’s brows pinched with apparent confusion. “Not what?”

Blue swallowed hard, his knees trembling so badly he wasn’t sure how he’d managed to remain standing. “You’re not crossing lines.”

“I know.” His Adam’s apple worked up and down as his gaze dropped from Blue’s eyes to his mouth.

“Just because I’m younger than you, doesn’t mean I’m too young.” It wasn’t everything he’d wanted to say, but it was good start.

Jack’s gaze felt heavier somehow, like the thoughts behind his gorgeous eyes were at odds. “I don’t know if...”

A million words could have ended the sentence, but nothing Jack said would have changed the way Blue felt. Right now, he only wanted to feel Jack’s lips. Taste him. Touch him. The way he’d done in every dream he’d had since he first met him.

“Nothing you say can change this.”

“Look, Blue.” Jack stepped closer. “I’ve had a rough year, and I don’t want my baggage to spill onto you.”

Blue scoffed, trying to thwart the ball of air stuck in the back of his throat threatening to strangle him. “You’ve had a rough year?”

Was it petty to compare? He instantly regretted the snide, selfish comment.

Jack’s eyes widened. “Shit, Blue. I didn’t mean it like that.”

“No.” Jack placed his hand on Blue’s shoulder and gave him a gentle squeeze. “It’s not.”

The second Jack looked him in the eye, Blue knew. He knew beyond a shadow of a doubt that if he didn’t make a move, he might never have the courage again.

Blue rushed toward him and instantly captured Jack’s bottom lip between his own lips and teeth.

Much to Blue’s relief, Jack didn’t pull away. Instead, he pinned Blue against the counter, huffing hot breaths as he pried Blue’s lips apart and slipped his tongue inside.

Blue sucked him in deeper, swirling his tongue around Jack’s. His body trembled, and Jack hugged him close, their mouths still fused together, kissing, suckling, tasting.

Their teeth clanked between kisses, and a wave of energy Blue only experienced when he jerked off, surged through him. Holy fuck! Had he busted a nut already? He pushed the mortifying thought out of his head and eagerly followed as Jack guided them toward the sofa.

Jack laid Blue back onto the cushions and gazed down at him with a hungry look in his eyes. Between laboring breaths, Jack whispered, “Jesus, Blue. What the hell have you done?”

This is the first book i’ve read from author Tyler Robbins and I am happy to say it won’t be the only one. Blueford or “Blue” is dealing with the loss of his mother and moving in with his grandmother. Jack has moved to Danville after having to leave his old job and town due to him being gay. This was a well written story that provided us with flawed characters who are willing to make changes to be better in life. Blue is young but naive is not a word I would use to describe him, when you’ve had to deal with death you learn quickly that the world is not fair. I loved the slow build of their relationship and how they were able to talk through their issues or misunderstandings. I wish the author could have had a small introduction to Blue’s mother, to get a better perspective of her and why he loved her so much. Especially since she was a big part of him and the storyline. I would love to read more from these characters and how their love story will continue to grow. I give this book 4 diamonds get your copy at Evernight Publishing or Amazon.

First of all, let me start by saying I enjoyed Heaven’s Just a Sin Away by Tyler Robbins. Blue’s story of coming to grips with his mother’s death, father’s identity, his sexuality, and life in general is a sweet tale. I liked Jack. Even though a lot was made of the age difference between the men (18 and 23), it is not that bad, really. My husband and I met when I was 19, and he was 25. I know this is an age gap that works, and a life-stage that can lead to lasting love and solid relationships. Blue’s journey is full of love, sex, hope, fear, and sadness. If his journey isn’t enough, there is a bit of a conspiracy going on that threaten’s Jack’s livelihood. For his part, Jack has to come to grips with being himself in the open. His past has shown him that people can’t be trusted with knowing his sexuality. The people of Danville prove him wrong. Jack and Blue aren’t in your face out, but they don’t necessarily hide away either. They just are. The thing I appreciated most about this story is that, while set in small town Texas, it isn’t full of stereotypical homophobic hicks. Too often I read a book set in “Texas” that just makes me want to throw my reader through the window. It probably helps that Ms. Robbins is actually FROM Texas. But I just want to thank her for showing that we aren’t all right-wing, homophobic, religious zealots. You are probably wondering why I started this review the way I did. I think this story could use to be tightened up considerably. There were times that it rambled a bit off course. There were times that the ending was telegraphed early on. There were times that I wanted a red pen. The bones are there. The story is fairly solid. However, as with many stories from this particular publisher, it isn’t quite polished. I enjoy Robbin’s stories and will continue to read them.

In a small town, there’s a young man called Blue. He’s the son of a single month who’s died of cancer. He’s withdrawn and awkward. Blue hides who he is until he meets Jack. Jack is the new sexy firefighter. They form a friendship that slowly slips into dangerous, sexual territory. But how will the small town handle their love? How will Blue’s tough Grandmother? With all those questions, trouble is on the horizon. The shady mayor wants to close the firehouse down... This is a fantastic contemporary story! Jack was gorgeous and sweet, a true gentleman. Blue is so freaking adorable. Be prepared, there are some Kleenex moments. As much as I loved the story it is slow moving in parts, long winded I guess you’d say. It is still worth reading through. The characters alone are amazing. Add in the fabulous support cast and you have yourself a hit! What detracts from the rating is actually the sex scenes. They are awkward. The writing is almost like a manual. Jack and Blue go through the motions of sex but there is no feeling behind it. But the story is still a great treat to read. It’s a somewhat simple plot worked over by a talented author to create an intriguing read. Heaven’s Just a Sin Away is about a small town with a big heart. I highly recommend it!

This was such a good story. Engaging, heartwarming, funny and full of life. Blue finds a new home after his Mom dies and he goes to live with his grandmother. He meets Jack and they like each other, but Blue is young and Jack isn&#039;t out to anyone outside his family. They begin a relationship, learning secrets along the way with the help of some friends and the man who turns out to be Blue&#039;s father. The story was well written, the characters made me laugh at times and cringe at others. I wanted to hurt the Pastor and the Mayor, and I wanted to hug Matthew as all the truths started coming to light. Blue and Jack had each others backs and watching them fall in love was special. This book was special and I enjoyed it very much!

I absolutely adored this book! 18 year old Blue deals with the loss of his mother to cancer, his first real attraction to another guy, what he wants to do with his life, coming out to his grandmother and the possibility of finding out who his father is. Jack, an EMT/Firefighter, just moved to town after being shunned at his previous work for being gay, is working at the fire station for his uncle. However, the Mayor and town Pastor are looking to close down the station to build a mall and then expand the town&#039;s church. That along with the romance that builds between Blue &amp; Jack, is the main story line but many secrets and cover ups are discovered along the way. I loved the writing. The characters and the setting were amazing. I appreciated that they didn&#039;t have the small town homophobia to deal with. Both MCs grew individually and as a couple. Both had the support of great family &amp; friends. Just a well rounded, wonderful story.