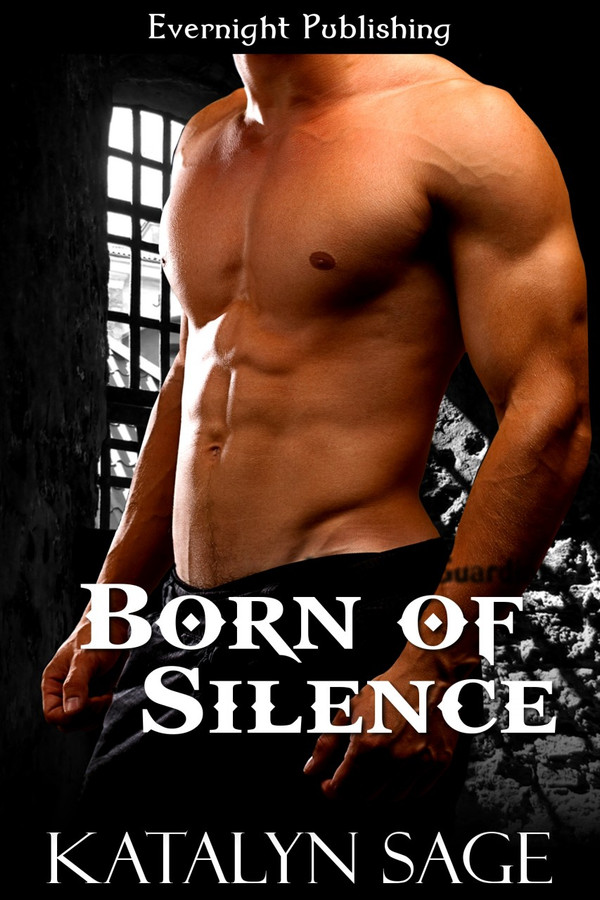 Imprisoned by the demonic warlord Ekhart, Garrick strives to make any escape possible from the Institute. When he spots a redheaded beauty with eyes of blazing blue, he can’t help but be captivated by the female prisoner. Even more than contemplating his escape, he is overcome with the desperate need to hear her voice and pleasured cries.

No longer able to stand experiments in the name of science, Danielle longs for the peace and serenity of death. When a new prisoner is thrown into the adjoining cell, she’s both scared and excited by his presence. He's handsome beyond compare and he shows compassion where she’s had none, but she's terrified of her own desperate need for human companionship.

Can a connection born of silence grow into a love that will stand the tests of time? Or will Garrick turn his back once he learns of the dark secret that lives within her?

He lowered his head to the cloth that still covered her body. His teeth latched on to the button just over her breasts, the slight tickle making her squirm. The button popped loose and he kissed her newly exposed flesh, causing her breath to hitch.

He smiled before he set to work on the next one, his nose and chin nuzzling between her breasts as he loosened it. Once the fabric was separated, he kissed her again before moving to the next, his heated gaze clashing with hers. He continued downward, grinning as her legs scissored when he reached the last button.

Finally the last one was free, and he pulled the fabric back. Dani lay there, bare to him as his gaze raked over her. She shook, afraid that he wouldn’t find her attractive, that maybe she wasn’t what he desired.

“You’re so beautiful,” he breathed.

She sat up then and grabbed his head as she pulled him toward her for a kiss. He didn’t fight her. He smiled just before their lips touched. Garrick’s hands cupped her breasts, massaging them in his large palms. With their lips still melded together, she reached for his shirt, desperate to remove it. Her fingers fumbled over the small buttons, and she gave up after only unclasping two before she gripped the hem and pulled it over his head.

He went in for another kiss as soon as his shirt hit the bed, and he gently pushed her down onto her back. The hardness between his legs lay against where her body ached. The pain, pure agony that begged to be attended to. Her hands went up, gripping his broad shoulders. Garrick’s lips traveled past her cheeks and down her neck, where they latched on to one of her nipples. She hissed again, her back arching as if her body wanted—needed—more contact. One hand held his head to her breast as her other one roamed between their bodies, down his hard stomach, until it reached the waist of his pants. After a few attempts at his buttons, and a little help as he lifted himself above her, she was finally able to wrench his pants down.

Garrick toed off his shoes, which thudded on the floor, before he kicked his pants off the rest of the way. Dani did as he’d done to her earlier, looking over the perfection of his perfectly toned body. He was magnificent, and so much more than she’d ever imagined any man could be. His skin was tan and taut; his pecks, smooth hardness. Even his stomach was flat and hard, and his shoulders…. Well, his strong arms and shoulders took her breath away. Though not as much as the smoldering look on his face as he looked down at her with so much desire that she wanted to cry out from elation as much as from fear.

She reached up and cupped his face as they smiled at each other. Her eyes moved downward again, to the length of his sex as it hung straight and hard between them. She flushed, snapping her eyes back up to his.

He shifted to the side, lying against her rather than on top of her. His hand slowly stroked up and down her arm as he leaned on an elbow. “Have you ever?”

His expression grew soft, but it also betrayed that he’d already known of her virginity. “Do you want to?”

His hand moved from her arm to her stomach, where he drew his fingertips lightly up to her breasts. “Are you sure?”

Her toes curled it felt so good, and a chill spread across her arms, breasts, and stomach. “Yes.” She grabbed his hand and pulled it to her breast, cupping herself with his palm.

He bent and pressed his lips to hers, darting his tongue inside her mouth as they both moaned. He rolled on top of her again, his hard erection resting against her and causing her to jump.

“I’ll go slow, sweetheart. If you want to go through with this, I’ll do anything I can to keep from hurting you.”

Garrick’s hand traveled down her body as his lips tickled her neck and chest. His hand skimmed over the curls between her legs and then cupped her. She bucked at the touch and he cooed her into stillness. His fingertips tickled her and she gripped his shoulder in an attempt not to cry out from sheer pleasure.

One of his fingers slid slowly into her and she stilled. “Oh!” He drew it out before plunging it deep inside her. “Oh, yes.”

He set to kissing her again as his lips speckled pecks on her chest and breasts, and lower on her stomach. The lower he went, the wetter she became, and soon she felt the pressure inside her grow tighter as he inserted another finger.

“Does this feel okay?” he asked.

Dani nodded and sat up so she could place kisses on his skin as well. In and out Garrick’s fingers went. He’d started out slow at first, but started to speed up. Dani’s breath came out of her in rushes, and she was hardly able to keep silent as he tortured her in such a delectable way.

I love the action, the characters, about countries, and the cities. I hope that more books in this series, I would like to read more!

I thought the book was going to be similar to the Immortal Guardian Series by Dianne Duvall, but it wasn&#039;t. It was completely different and most enjoyable. Anyone who loves to read about vampires, immortals and other realm type creatures, this series is for you

I have re-read this series twice it is that good. Can&#039;t wait for more. These books are hard to put down as you always want to know what is going to happen next. Recommend to everyone. A definite must on your shopping list.

I liked the story. It was a gooid read. I probably will not re-read it again but it was entertaining and although a tad sad, I enjoyed it. I do like romantic men!

The Language of Silence by Tiffany Truitt