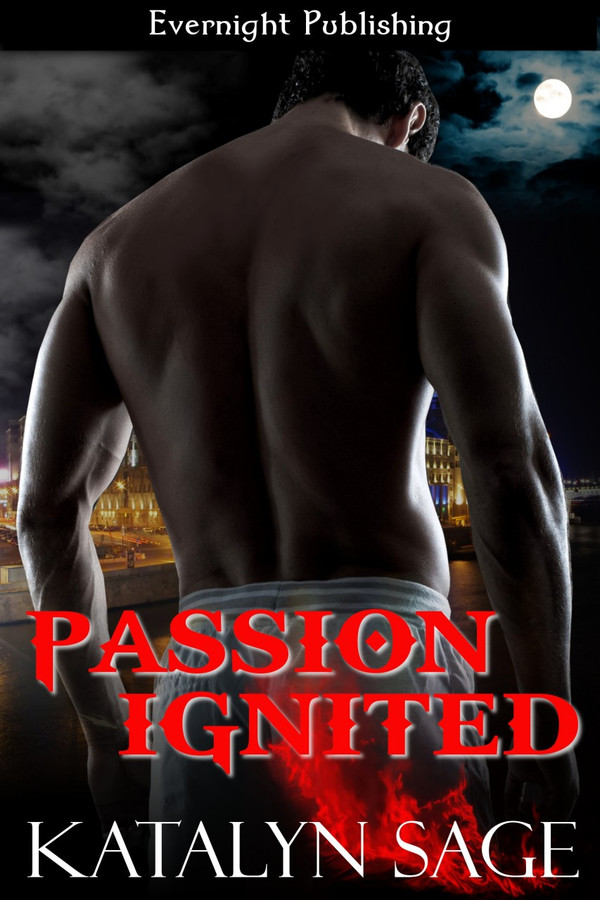 Nitro has spent centuries committing crimes and slaughtering countless. As a fire demon, her Instinct to create chaos has made her one of the most feared demons in existence—both in the Lore and by humans who have witnessed her wrath. When she’s hired to work with the Lore-legendary Guardians, her own curiosity draws her into their world.

But when she’s introduced to Raider, a vampire warrior within the Guardians, her conviction begins to fade.

Raider has mourned the loss of his wife and children for a century. Only his duty to the Guardians has kept him from hunting down the fire demons that murdered his family. His resolve diminishes when Nitro—a bitchy, all-around pain in the ass—joins the Guardians’ ranks. Can he learn to love a creature that may have been responsible for his family’s death, or will his pride stand in their way?

Raider stepped back and allowed her entrance. He looked down at what she was wearing, only to see that she was in a different set of her fighting clothes. “You sleep like that?” he asked, shutting the door.

“Either this or naked.” She shrugged.

The mental image that slammed into his mind had him groaning before he turned to face her. And when he did, that sexy smile had spread across her face.

“I take it you like the thought of me naked?”

He didn’t answer. Instead, his jaw clenched and he gulped. No fucking way was he answering that.

“I’ll take that as a yes,” she said. “Which leads me to why I’m here: I’ve come down here to offer an exchange.” She’d started walking around his room, picking things up to inspect them, only to set them back down and move on to something else. “You find me attractive, I find you more or less so. So I think we should fuck.”

All the air escaped him on a quick exhale. A green alien wearing a bright pink tutu and go-go boots could have punched him in the face and he wouldn’t have been more surprised. “What?”

“I want to fuck you. You know, be physically intimate—”

“I, uh…I heard you,” Raider stammered.

“You have…done it before, haven’t you?” She eyed him warily.

“And you know your way around?”

Pushing that thought from his mind, he focused on her. “Listen, I don’t know if that’s such a good idea, we work together.”

“Oh, I think you like the idea a lot.” She looked down at the bulge in his pants. “I have seen you staring. I believe we would be a good fit sexually.”

No doubt about it, Raider thought. The female was fit. Finely muscled and toned, and yet still had delectable curves he hadn’t been able to ignore since the moment he’d met her.

Nitro set down a dagger that had been on his nightstand. She slowly walked toward him, her hips swaying side to side. Again, she stepped so close to them that their noses were inches apart.

Her eyes met his and a small smile spread across her face. “What do you say, Raid?” Her hands traveled up his bare chest, settling on his shoulders. Her eyes were half-lidded as she stared at his lips. “You wanted to kiss me earlier,” she whispered. “I could see it as clearly as I can now. Do you want to kiss me?”

Raider couldn’t speak. Different emotions warred inside him. Of course he wanted her. There had been instant attraction since the moment he’d laid his eyes on her. He truly wanted nothing more than to sate his needs on the female before him. But on the other hand, she was a warrior, a female that Demetrius had sent to help them. What kind of bastard would he be to bed a warrioress who’d been sent to assist them in this war?

“I guess you aren’t interested,” Nitro said. He sensed that she was hurt, her mind only allowing the briefest glimpse before she shut it back down. Her hands dropped from his shoulders and she stepped away from him. Walking to the door, she said, “I’ll just go find the wolf.”

Nitro didn’t know Raider could move that fast, but he was on her in an instant. One second she’d been walking toward the door, the next, her back had slammed into it. His lips were on hers the next, and she’d lost count after that. With his arms wrapped around her, she couldn’t believe the warmth within them. He was gentle, and yet unyielding as his tongue sought entrance. She parted her lips and his tongue darted inside. Moaning against him, she wrapped her arms around him as tightly as he held her. Sliding her hand up to his head, she pulled him closer to her, their mouths fusing together forcefully until there was no room to breathe.

Raider was delicious, his tongue working fluidly in her mouth. He was everywhere. His tongue, his hands, even his hips pushed against hers in rhythm. As his hand found her breast, he began kneading it, sending Nitro’s body into hyper-drive. And even though she wanted to continue, she’d forced herself to break free from his domineering kiss. “Raider, stop.”

He set another kiss on her neck before pulling away. “Why?”

“Because we aren’t doing anything tonight. I came over only to offer a deal. There will be no fucking tonight.”

He stepped away from her, obviously confused by what she was saying. But she wasn’t about to get into it tonight.

“That was quite a treat though.” She smiled. “That will definitely get me through until next time.” She turned around and opened the door. Looking over her shoulder, she said, “Goodnight,” and stepped out into the hallway, shutting the door behind her.

Love this series of books. Makes you realise just what you are missing in your life. Would definitely recommend this series.

Born of Silence by Katalyn Sage

Passion in the Dark by L.M. Connolly