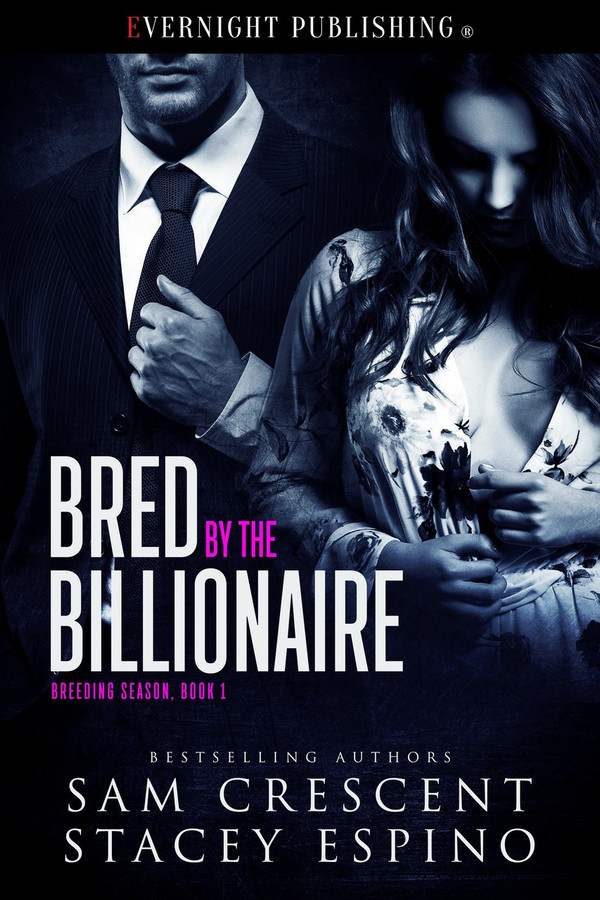 Adora Garcia isn't interested in being the breeding vessel for some arrogant billionaire. She has plans for her life and they don't include being knocked up by a man over twice her age. Her single mother cleans Tobias Bennett's penthouse suite, so when Adora refuses his indecent proposal, he threatens to find a new maid.

Tobias needs an heir, but he's not ready to settle down, and certainly not interested in love. He doesn't have a plan until he sees the curvy brunette standing in his condo. Everything he wants, he gets, and he wants Adora. What he doesn't expect is the rush of possessiveness that takes him by storm.

Will Adora give up her virginity to the ruthless businessman? Can Tobias open his heart after keeping it closed off for decades?

Tobias had expected this to go much smoother. Any woman would kill to be in Adora’s position, but she acted like he’d forced her down the green mile. His initial plan only included using her to mother his child, but he’d spent the weekend unable to get her off his mind. He knew there was no chance of cutting her loose once he got what he wanted, so he’d set her up in an apartment to use at his leisure. She wouldn’t have to worry for anything, so he didn’t see an issue with it. Without his assistance, she’d end up scrubbing toilets like her mother.

“Don’t look so shocked,” he said. “I’m forty-five, and my parents are tired of waiting for an heir.” He held the car door open for her and waited for her to take a seat, then joined her.

“You shouldn’t have to pay someone to be with you. Why can’t you fall in love like everybody else?”

“It’s not so simple. I don’t do love,” he said. All his life, he’d been taught that love and empathy were weaknesses. The only way to move up the ladder of success was with a ruthless business drive and putting the almighty dollar above all else.

“I need someone to pass my wealth to when I’m gone. It’s important to keep the bloodline alive. Otherwise, it was all for nothing.”

He leaned back against the leather seat and massaged his temples, wondering why he tortured himself. Of all the women in the city, the one he wanted wasn’t on board. He’d dealt with risk assessment and financial forecasting all his life. Taking his offer was in Adora’s best interest, she just didn’t realize it yet. “Did you know I play golf with the president of your college every other Sunday?”

She twisted in her seat, her face blanched. “What is that supposed to mean?”

Tobias sat up straight, leaning into her personal space. “Use your imagination.”

“You can’t do this,” she whispered. “You can’t force me to be with you. Why would you want to?”

“Don’t fight it. I promise you won’t regret taking my offer.” She looked so innocent, her lips full, her eyes wide with uncertainty. Part of him wanted to console her, but he knew he couldn’t backpedal now.

“Why can’t you just leave me alone?” Tears welled up in her eyes. “I’m nobody. And you’re old enough to be my father.”

“Is age that important to you?”

She paused. “No, but loyalty is. I don’t want to be used and discarded. I deserve better than that.”

He’d never had a deep-seated desire for any woman, young or old. Tobias always assumed he was a sociopath like his father, but fuck, he wanted Adora, regardless of her age. She tore down his resolve, making him weak, making him want things he’d never cared about. He held the side of her head, using his thumb to wipe away a tear. “It has to be you, Adora.”

Until he’d first seen her on Saturday morning, the idea of an heir had been a burden on him. But the moment he saw her, it all became clear, and he had to move forward with his plan—to breed her, bind her to him for life.

Tobias used his free hand to drop her school bag to the floor of the car. She tried to reach for it, but he shook his head. He rested his hand on her thigh, making her flinch. This was new for him. He wasn’t used to reluctance or purity in the women he dated.

“What are you doing?” She placed her hand over his, but he didn’t move away.

“You want loyalty? Done. But I need to know everything. Tell me what experience you have.”

“With men, Adora. I want to know every detail.”

After a brief silence, she answered. “There’s nothing to tell. I have no experience.”

His cock strained in his pants hearing the confirmation.

He knew she only obliged him by answering out of fear. She didn’t want Maria to lose her job or for herself to get kicked out of the college. He was a bastard, always had been.

“What about kissing? Touching?”

She swallowed hard, wiggling in her seat. He decided he liked her shyness. It brought out his protective instincts, something he’d only associated with business. “I already told you I haven’t done anything with men. I’m not a whore, so I don’t know why you think I’ll agree to any of this.”

“Because you value your family and education, no?”

She frowned, but she looked more sad than angry now. “So you’ll rape me?”

He chuckled. “Trust me, by the time I’m ready to deflower your pretty little pussy, you’ll be begging me to fuck you.”

“What do you have against me, Adora? Are you not attracted to me? What is it?”

She looked him in the eyes for a moment, but she kept quiet.

“Is it my age?” The thought of her wanting a man her own age brought out an unexpected wave of insecurity.

She exhaled. “Do other women like being blackmailed by you?”

“I’ve never had to. I’m not used to women playing hard to get.”

“This isn’t hard to get,” she said. “This is me refusing to jump to third base. You can’t just buy people—well, not me, anyway.”

Tobias knew she couldn’t walk away because of her loyalty to her mother. But he loved her stubbornness. It brought out the hunter within him, made him feel ten years younger.

“I want a lot more than that.” He moved his hand up higher on her thigh. She had thick legs, all curves he wanted naked and under him. Tobias looked forward to filling her with his cock, fucking her every day and night until she was ripe with his child. When he reached the apex of her thighs, she squealed and braced her hands on his shoulders.

They were so close, only a breath apart, so he leaned in and brushed his lips against hers. What surprised him most—she didn’t pull away.

I love this story so much... it was full of angst, romance, and hot sex... Adora is someone who just wants to do better and make her mother&#039;s life easier... Tobias is not looking for marriage, but when the two meet the attraction is too much for Adora... When you feel invested in the characters you can&#039;t help but to want to know more about and what happens to them... Such a great start to this series and I can&#039;t wait until I read the next book and I hope it&#039;s as hot as this one.

Stacey Espino and Sam Crescent give birth to a fabulous new series with this steamy and sometimes sensitive story. In &quot;Bred by the Billionaire&quot; we have Adora Garcia. She is a smart and strong young heroine. For someone so innocent it was impressive for her to hold her own with a man so used to getting pretty much everything he ever wanted. Many women would have been deeply intimidated by such an aggressive pursuit. I admired her determination to complete her education and to protect her mother. Tobias Bennet is at times almost unbearable when it comes to his arrogant ways. But as the story progresses and pieces of his past are revealed he becomes so much easier to understand. It was an absolute pleasure to see him struggling with his reaction and changing feelings for Adora. If you are a fan of older men younger women stories where the men are powerful and the women are curvy and the attraction is undeniable then this is a must-read. The Story: Adora Garcia doesn’t have time for men in her life watching her mother suffer from a broken heart for her entire life has convinced her to concentrate on her education and take care of them both herself. Billionaire Tobias Bennet is through doing his parents’ bidding they want to choose his bride and have him produce an heir but he’ll choose who gives it to him

Loved the story of Tobias &amp; Adora. Even though Tobias was a bit of an ass and kinda arrogant, you still like him cause he&#039;s also a good guy. And Adora is so sweet and smart you want the. To work everything out. I couldn&#039;t stop turning pages cause I had to see what happened. Can&#039;t wait for the next book in the series!!!

I loved every second of this book. Hot sexy and they&#039;re perfect together. Need more from these authors!!

Good book. Love all of Sam&#039;s books. If you like older man / younger woman, this is the book for you.

I really enjoyed this first book in the series. It was sweet, sexy and hot, with some drama, that I love. Honeslty, Tobias surprised me. I wasn&#039;t expecting him... Well, let&#039;s just say the surprise was good one. Thought, that doesn&#039;t mean he wasn&#039;t an arrogant ass sometimes. But even that was somehow endearing. Tobias made me to like him from the beginning. Maybe because I just knew there was more to him, then even he himself knew. That he had a heart. That he was special. Tobias just needed the right woman to realize it. I loved how he was with Adora. Even at the beginning. It may seemed as him being selfish, wanting to use Adora and discard her, but even then I could see it was much more. Even thought Tobias didn&#039;t realizes it himself yet. And the saying &#039;actions speaks louder then words&#039; comes to mind.

Christmas with the Billionaire by Sam Crescent and Stacey Espino