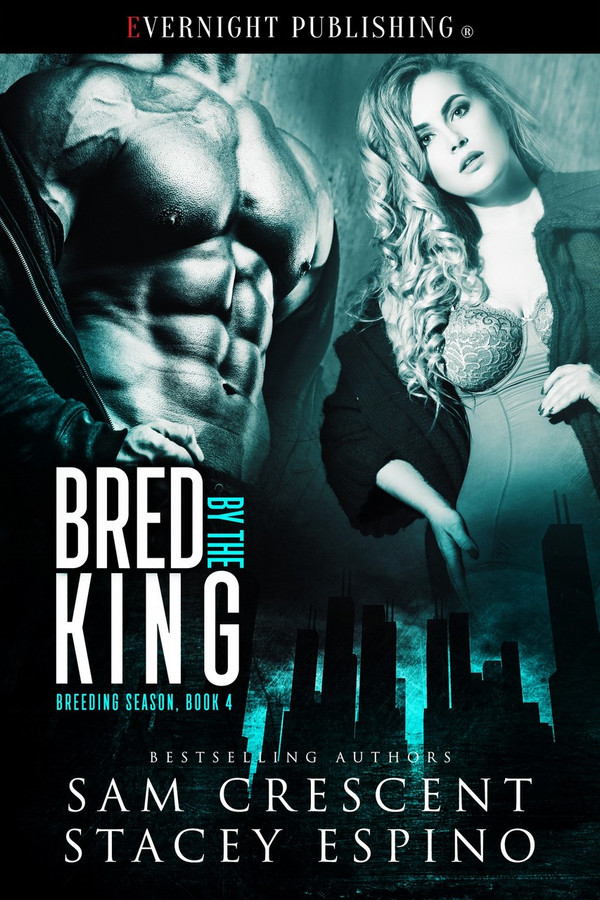 Can love exist in a lawless world?

It all happened so fast ... the virus, the mass deaths, the collapse of civilization. The government insisted Ashley was unique, so she was branded, permanently marked as a fertile woman. She considered the so-called blessing to be a curse. Every man left alive on the planet wanted to use her as a breeding vessel. She wanted no part of becoming a baby-making machine.

Draven knows how to survive. After spending most of his adulthood in the Marines, the transition to the hostile new world felt almost seamless. He created a kingdom from the ashes, keeping up walls to protect the people he chose to allow inside. It isn't until Ashley shows up at his gates that he realizes what he's missing. He wants the curvy young virgin to give him an heir. What he doesn't count on is falling in love...

She wasn’t an animal, a vessel to be bred.

What she wanted no longer existed. Love and family were things of the past, something for future history books. If only his narrowed gaze, the one perusing every inch of her body, saw something more than a fertile. If Ashley had to choose a man to love her, she wouldn’t hesitate to select Draven. He was perfect—rugged and fearless, powerful, hypnotizing.

He came closer, and she instinctually backed away.

There was a scar across his cheek, his thick stubble not growing along the seam. It only added to his appeal and intrigue. She caught his scent as he walked back and forth in front of her, a spicy sandalwood that she breathed in deeply.

“Sit down.” He pointed to a loveseat near his bed. She complied, cautiously sitting on the floral print cushion. “Tell me about yourself. Before the virus. What did you do for a living?”

She cocked her head, confused by his question.

“People don’t talk anymore. The art of conversation died with most of humanity, it seems. Tell me something. A memory. Anything.”

Ashley swallowed hard. This was strange, almost dreamlike, but it took her focus away from basic instincts and allowed her to think back to when life had been normal. Sane.

“I was a nursing student. My last year.” Her own voice sounded odd to her. “I had a dog. His name was—” Tears filled her eyes because she couldn’t even remember. So much of her past had been blocked out, maybe for her own sanity.

“It’s okay, baby.” Draven squatted down in front of her, one hand on her knee. “It’ll take time. Don’t worry about it.”

She took a deep breath, not wanting to appear weak in front of a man.

“Do you remember any of your hobbies?”

“Reading. I loved to read, but most of the books have been burned for heat,” she said.

He smiled. “I have a library downstairs. Fully stocked. I’ll show it to you later, if you like.”

She couldn’t help but smile back. Ashley wondered if her face would crack. It had been so long since she had something to smile about.

“It’s good to keep the mind active. Sometimes an escape is vital these days, don’t you agree?”

She nodded, trying not to stare at the broadness of his shoulders or the way the material of his shirt tightened around his biceps.

“Me, I was a Marine. Good one, too. Fought for freedom, or so they told me. Maybe I was a pawn for the government, an assassin for their greed. Who knows? Now, there’s nothing worth fighting for.” He wet his lips. “No, that’s not true. Not anymore.” His hand was still on her knee, and she could feel his heat and every twitch of his fingers. Her core coiled tight, her reaction to this man unnerving her. “Do you have any fears, Ashley?”

She loved the way he said her name, like it was a dessert he was savoring.

“Men. Being a victim.” Why was she opening up to this stranger? This had to be all an act. But somehow, he made her feel safe, her hard layers falling away. “I never asked to be a fertile, but it’s a curse, not a blessing.”

“Don’t say that. It’s a beautiful thing. A gift.” His hand slid slightly higher, resting on the fleshy part of her thigh. Could he hear her heart pounding in her chest? It sounded deafening in her ears.

“That’s because you’re a man. You probably don’t have any fears.”

He scoffed. “I’m afraid of a lot of things. Some I never even realized until you showed up at my gates. Most of all, I’d say the biggest one is death.”

This caught her interest. “Everyone has to die.”

“The way the world is now, the next day is never a guarantee. I’ve seen so much death, even before the virus. I want no part of it.”

He chuckled. “Maybe I will. What about you? Care to join me?”

She shrugged, playing along. This fairy tale was better than her reality for now.

“We can forget the rest of the world, stay here, and live forever. Just you and me.” Something changed in his demeanor, a darkness passing over his features. Hunger. She wasn’t afraid. If anything, she didn’t trust her own instincts when it came to Draven.

Short… hot… intense. In a world that has changed beyond recognition, where women are sorted into whether they are fertile or not, there seems to be little hope left. Ashley was given the tattoo declaring her as fertile, but now she wishes she didn’t have it. Helping another woman, Luanna, they head towards a place they have heard of, where safety is promised. Ashley didn’t count on Draven though! I thoroughly enjoyed this book. It is hard, and brutal, in places – perfectly describing this harsh world they are now living in. Attraction is instant, but feelings take longer. How this happened was perfect for the book. I loved the different characters, Luanna and Luke being favourites after Draven and Ashley. The world-building is excellent, the pacing is smooth, and there is enough tension and intrigue to keep you on the edge of your seat. Although this is book four in the series, it is the first one I have read. I had no trouble following the story, and definitely recommend it.

Sam And Stacey got it right again! Draven and Ashley survived an apocalypse and were able to find love and passion with each other to start building a family and a new world.

Despite good writing and storyline, I wasn&#039;t drawn into the story. I liked Draven. He was a force. He for sure is someone, I want at my back, if world changed like in the story. And lucky for Ash, she has him. Not sure how she survived until Draven. Sure she&#039;s a fighter, but Ash still was too soft for after apocalypse world.

I think out of the 4 books in this series so far, this has been my favorite. The world is in chaos and fertile woman command high prices. Ashley wants nothing to do with this but being a fertile woman, she&#039;s wanted. Escaping from 4 men, she makes her way in the world and picks up a friend, Luanna. Together they make their way to a settlement where woman and children are protected. Arriving, Draven, the head of the settlement notices Ashley and instantly wants her, but she is very leary of men and refuses him. I loved how she didn&#039;t give in to him and how he took his time to try to win her over. The story is intriguing as to what would happen if society as we know it fell into destruction. The secondary characters in Luke and Luanna were great!! They helped the story and were instrumental in it. I&#039;m hoping that we will see their story or stories on down the road. This was such a good book. I highly recommend it!

This was a good book to help pass the time. I liked the back story of how the apocalypse took place and the fall out people experienced. I felt the best friend characters were not as well fleshed out as the mains and that is a shame it would have really brought together all elements of the story perfectly. At times these characters felt like after thoughts. I thought the King was interesting. I appreciated his devotion to his kingdom and the woman he choose as his queen. Many aspects of the story felt like they have been influenced by the Handmaidens tale, so if you’re into that you will likely be very into this story. The h is a young fertile woman fleeing an uncertain fate. In these times, not many woman are fertile so she has faced repeated attacks and kidnappings(no rape) however, many other woman have not been as fortunate-including her best friend. That’s how they meet, she stops an attempted rape and her and the other woman take to the road in search of a kingdom she hears women and children can be safe in. The story did have some suspenseful elements. I freely loved how suspenseful it could be.

I&#039;ve read similar books but Sam Crescent puts a twist to everything. Draven is all man. Strong yet still having a gentle side for his Queen. I hope I&#039;m half as strong as these people with their hearts if our future ever comes to a starting over.