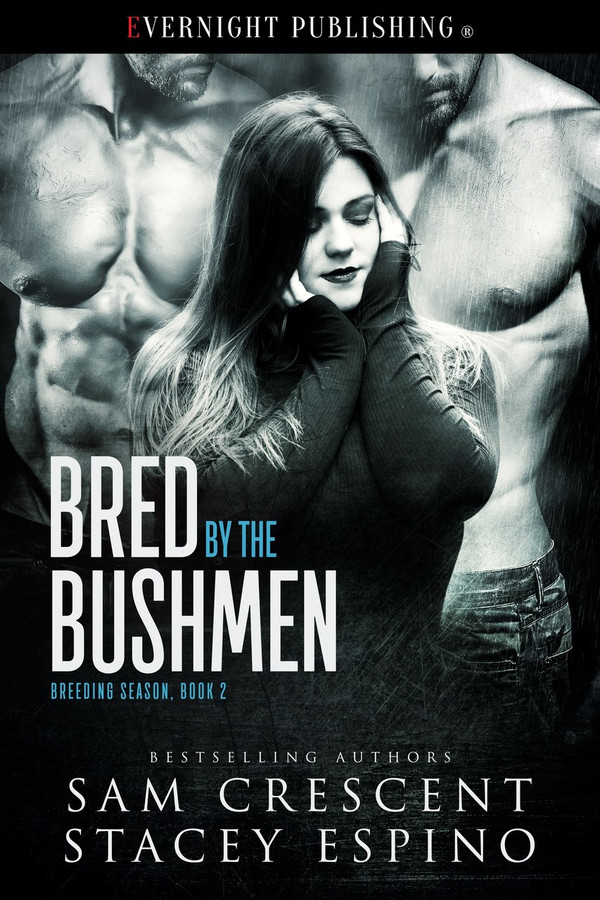 After nearly ending her own life, Opal books a soul-searching Alaskan wilderness tour. She's used to loneliness and rejection, but needs to learn how to love herself. When things go horribly wrong on the tour, she finds herself cold, alone, and facing certain death.

Caleb and Damon have the perfect life. They live off the grid, far from society and its destructive influences. But it doesn't take long for the White brothers to realize what's missing. They need a woman, and crave a family of their own. When their dog leads them to a lost hiker in the woods, they swear she was dropped straight from heaven.

It will take a lot of hard convincing for the bushmen to prove life at their cabin is better than what Opal left behind in the city. And they won't take no for an answer. They plan on keeping Opal, loving her, and filling her with their baby. ​

“How about you warm me up?” he asked without thinking. Why couldn’t he keep control like his brother? Their uncle always said he lacked a filter on his mouth.

She didn’t looked insulted. Instead, she moved closer, running a hand up and down each arm, trying to create warmth from friction. After a while, she started moving slower, her fingers tracing his muscles. The moment felt intimate, his cock harder than oak, straining in his Wranglers. When she reached up high to rub both shoulders, he couldn’t hold back. He took her waist, ducked low, and kissed her on the lips.

How long had it been since he’d kissed a woman? Even during one-nighters he never kissed. Opal’s lips were softer than silk, and she melted against his mouth with no hesitation. He pulled her closer, his cock pressed to her stomach. She smelled like clean soap, and all woman.

When he pulled back to gauge her reaction, her lips were swollen and parted, her chest heaving. Fuck, he wanted her on his bed, but for once, he fought for control. The last thing he wanted to do was scare Opal away. He didn’t want her for sex—well, not only sex. Damon was in this for the long haul if she’d give them a chance. Judging by her kiss, she was open to the possibility.

“I feel warmer already,” he said. Damon ran the pad of his thumb along her lower lip. He stared into her green eyes, wondering if she could see all the way to his soul. She was beautiful, intense, and had more curves than most men could handle. He wanted to love every inch of her body, memorize every beauty mark and detail.

“I’ve never had a boyfriend,” she said, her tone colored in shame.

“Nothing wrong with having no experience,” said Caleb, moving in from the other side. “In fact, there’s nothing more attractive.”

“Stay,” whispered Damon. “Take a chance on us.” He kissed her temple.

“I’m afraid. Of everything,” she said. “What if you change your mind once you get to know me?”

He scoffed. “This isn’t the city, sweetheart. We play for keeps. Once we make this official, we’ll be a family.”

She smiled, but quickly hid it. “How do we make it official?” Opal bit her lower lip. Was their little virgin teasing him? She was playing a dangerous game.

Caleb and Damon are brothers who live together in a small cabin way out in the woods. Happy without the trappings of civilization or the craziness of other people they have a quiet but comfortable life. The only thing missing is a woman – but the brothers are looking for a very specific type of woman. Someone who is willing to live permanently with them off the grid, someone willing to be shared by the two men, someone who can love them both and the life they live. Someone who they can adore and cherish. Lost, alone and questioning her entire existence, Opal is close to reaching rock bottom. When she meets the two brothers can she finally find everything that her life has been missing? I found this to be a fun and sexy story. I was surprised but pleased that Caleb and Damon approached a relationship with Opal from pretty much opposite ends of the spectrum. Damon was ready to jump right in, all but picturing babies with Opal when they had barely exchanged even six words. Yet Caleb was far more reticent. He was worried about Damon getting his heart broken, about the realities of trying to forge a relationship with a modern woman when for all intents and purposes the two brothers lived a very different, alternative lifestyle. In this respect I felt myself understanding and sympathizing strongly with Caleb. His character could have easily become a negative or bitter man, but that wasn’t the case and I felt his character was far stronger because of it. While I enjoyed both men’s personalities I was particularly connected to Caleb. I also really enjoyed Opal’s character. A larger woman she is quite young (twenty two), innocent and in many ways – emotionally in particular – a young character. I found Opal to be full of self-doubt and somewhat malleable which usually annoys me in a heroine. While I didn’t connect as well with her as I could have I certainly found myself rooting for her and I enjoyed her quirks and foibles. She wasn’t a silly character or an annoying heroine which I was grateful for. The pacing of the story was lovely – between Damon wanting to rush right in and Caleb determined to slow things down and let them unfold in their own time I felt the story did a great job of balancing between too fast and too slow. It helped a lot that Opal was injured and so the brothers couldn’t simply jump her bones the moment they allowed her into the cabin and their life. The sex was hot and I found it to be sensual but not over the top. There was a small but interesting plot in the middle of the story that while I found it a little superficial it did round out the story nicely and keep it from being merely all about the threesome relationship and sex. In most ways I feel this book really delivered – with interesting and layered characters and some smoking hot threesome sex it was a great read and one I’d happily recommend to friends.

Honeslty, I&#039;m not sure what to say. It was hot and I love to read menage genre, and there was a bit of dangerous situation going on, which was a good touch, but something was... Missing for me? Maybe it was how negative Opal was about herself. I had read about h who people made her feel not good enough about herself but Opal was on a new level of negative. She saw no value of herself at all. Then I guess she was lucky to meet Caleb and Damon. Those bushmen will make her feel like a queen. In all it wasn&#039;t a bad story and I&#039;m not trying to scare you away. Lol. If this book caught your attention, give it a chance.

I love how these authors write so seamlessly together... I loved this book Opal was so afraid yet so put together how she took chances really made me root for her.

Great story just wished it would have been longer. Loved how Opal decided to take a chance and go for love!!!

This was so hot a read two brothers living life as simple as can be and looking for that woman to share it all. It was just a good read with this bushmen to love their woman with all they got to give It was just so prefect.

Great story just wished it would have been longer. Loved how Opal decided to take a chance and go for love!!!