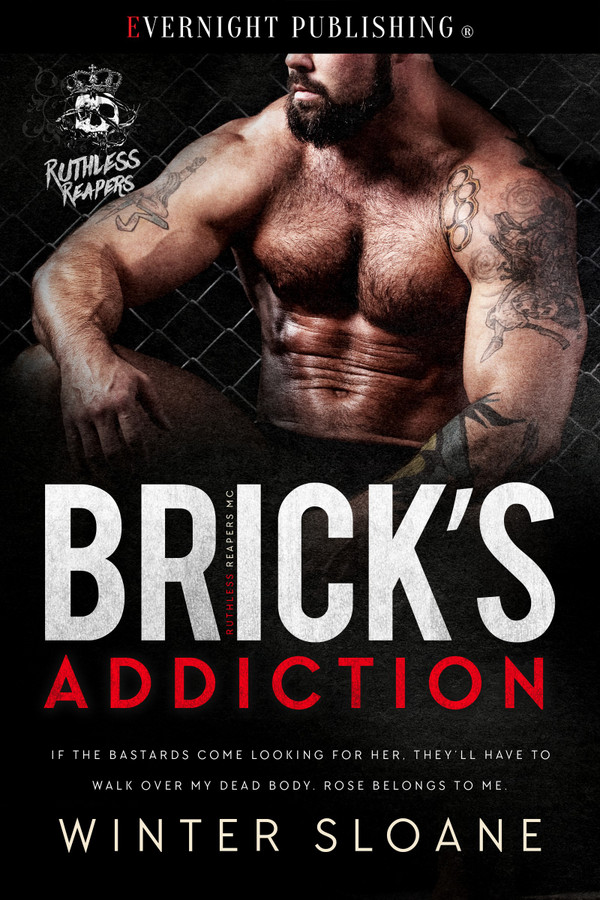 Brick: As Vice-President of the Ruthless Reapers MC, I’ve helped King lead the club with ferocity and pride. Putting the club before myself always came first, until I stumbled upon Rose. Wanted by a rival MC, Rose is beautiful, fierce, headstrong and more trouble than she’s worth. Despite the risks, I offer her my protection. If the bastards come looking for her, they’ll have to walk over my dead body. Rose belongs to me.

Rose: My scumbag brother skipped town after stealing from a dangerous MC. He’s left me and my nephew to the wolves, but luckily for me, Brick rides in to save the day. Brick is bad news. I can’t fall for a biker. That path won’t lead to anywhere good but the more I spend time with Brick, the more I’m falling for him.

“I’m just a stranger you met tonight. Why would you help us?” she asked.

Brick didn’t miss the suspicion in her voice. He expected that kind of reaction. “I couldn’t just leave a beautiful woman in trouble all alone for the wolves to devour,” he said with a shrug.

That was exactly what the Black Dogs would do, if they got their filthy paws on her. They’d take a strong-willed woman like her and rip her to shreds. The thought made him angry. If she said she wanted to go her own way, he would’ve probably sent a prospect to tail her just to make sure they were both safe.

Good thing she agreed to come with him. Brick had no idea what he was doing, of course, but she and the kid were here now.

“I see. Would you like me to thank you for help now or…” Rose trailed off. Color appeared in her cheeks and neck.

Brick couldn’t help but grin. She understood the game after all. He neared her. She didn’t step away but firmly held his gaze, even if she had to crane her neck to do so. Rose was such a tiny little thing compared to him. He rested his hand on her cheek, pleased she leaned into it unconsciously. Then he released her, twirling one finger into one of her dark curls.

Her breathing hitched. Brick dipped his gaze lower, letting her see how hungry he was for her. He admired the swell of her generous breasts hidden under her bra. Her luscious curves and body, so ripe for the taking. Her nipples hardened just from one look. If he slipped his hand under her jeans and underwear, would he find her wet for him? Brick’s dick woke at that thought.

No. Brick peeled himself away from such temptations. He let go of her hair, although he still pictured her lying naked in his bed, her glorious hair spread out on his pillow and sheets.

ARC provided by NetGalley. If you want a quick and fast read to fulfill your MC smut for the night, Winter Sloane delivers with this one. You will get whiplash from start to finish, but I hope she gives us more with a series to check back in on Brick

I really enjoyed this book. I thought the plot and characters were really well developed and I thought the book was really good. It kept me entertained and I couldn&#039;t wait to see where the story goes. I loved the motorcycle club part of the book. Also I loved the romance.

I was hooked immediately! The world building was amazing and I fell in love with Brick and Rose. I&#039;ve found a new favorite author.

Thank you NeTGalley for the eARC. I have one complaint about this book...it was TOO SHORT! I wanted to keep reading about this couple! I wanted more details into their lives and I cannot wait for another book! This was so good. I dont know if there was a book 1 but I am going to look for it now and anything else from this author!

Overall this was a good read. It was fast paced and plenty of action and excitement. You want to keep reading to see what happens next and how Rose rises up to the next challenge. I do wish we got to know Brick better, such as his family, favorite beer or drink, things he enjoys doing in his down time. We learn so much about Rose but don’t really know anything about Brick. “Brick had a silencer equipped. Razor also came prepared for the firefight, so he wasn’t worried. Gin told him the locals wouldn’t tattle as long as Brick paid them for their silence”. Who has the silencer? Is it on the rifle? When do they make silencers for rifles? “He approached her. Rose seemed distracted, looking at Stefan. This close, Brick could smell the soap he used on her skin. His shampoo. Fuck, but she smelled delectable.” He used on her skin, he didn’t take a shower with her so how could he have used soap on her skin? The end of the book ends with this “ “Penny for your thoughts?” Brick asked, gently handing Sam back to her. He gave Sam’s head a kiss. Smiling, Rose told him.” what did Rose tell him?

Not all prince charmings come on a white horse. Some may just come on a Harley. Rose never thought she would get out of the rat race she was stuck in. Couple that with taking care of her nephew, who her brother left behind, and you have a recipe for a life of struggle. That is until one fateful night when she met Brick. Can their love be like a rose that grew out of concrete? This was my first read from this author, and I enjoyed it. It was face paced and didn&#039;t have any dead spots. This novella is a great afternoon read for anyone who wants a little fast-paced love in their lives.

Rose is doing all she can to make it and provide for her and her nephew by working three jobs. Her useless brother seems to have gotten himself wrapped up in something dangerous with one of the MC&#039;s and has left her and the baby as a target. Brick is the Vice President of the Ruthless Reapers MC and happens to come to Rose&#039;s rescue, saving her and her nephew and offering protection to them. I really enjoyed both Rose and Brick as the main characters and found the story to be very engaging. I liked that Rose was an independent and strong character. She wanted to work and support herself and not just have Brick support her. Brick&#039;s Addiction was a very quick read, more like a novella. Insta-love/lust isn&#039;t totally my jam but the story was still overall enjoyable. This was my first book by this author and I would definitely be interested in reading more of this author&#039;s work in the future.