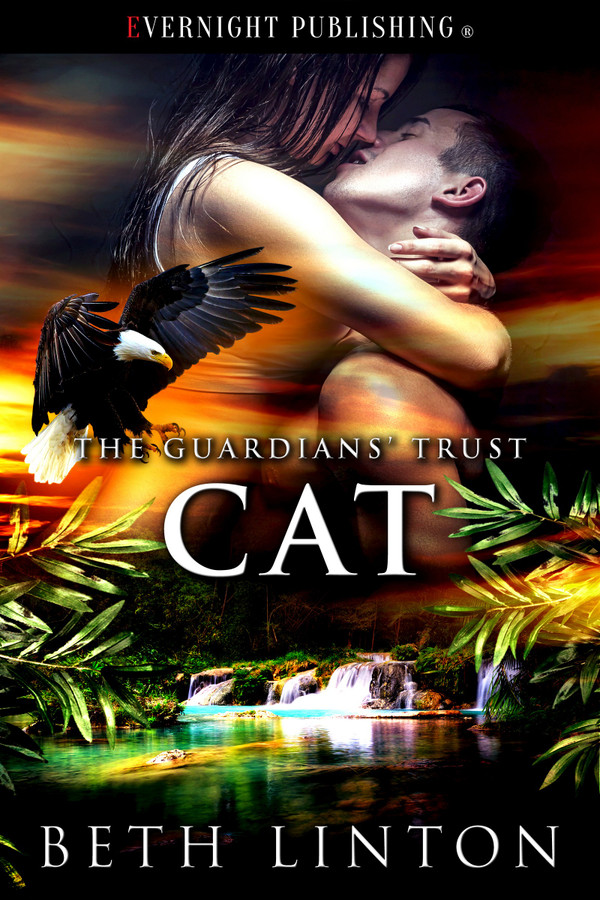 Some women are born identical - one in the human world, one in the jungle of the Other Realm. It is their fate to change places. In book five of The Guardians’ Trust series, Cat embraces her future with the man born for her…

HE IS HER ANCHOR
Cat leaves the tranquility of the Guardians’ forest and emerges through the gateway into chaos. As arrows fly, and the Resistance fight for survival, the stranger she has promised to marry whisks her away and vows to keep her safe.

HE REFUSES TO FAIL
Grieving, the battle shakes Aderyn into domineering possessiveness. He failed to protect his brother. He refuses to fail his almost-wife. Cat understands his behavior is rooted in grief, but his insistence on keeping secrets is suffocating. Can Aderyn accept Cat has a role to play in their war and face the fears that keep his eagle grounded?

Searching the valley for she knew not what, Cat settled her gaze on the waterfall and the stones it shielded. She almost giggled in relief when the gateway’s song rose to greet her. Away from the waterfall, her belief that she was to go to the Other Realm had remained, but self-doubt had also dripped in to make her question what she knew to be true. After all, those sectioned for delusional behavior believed in those delusions. When the gateway chorused her name in welcome, Cat laughed, pleased at the reassurance she wasn’t losing her mind.

“Are you okay?” Aled asked.

Ordained husband to Catrin Macfione, he had come to the gateway while Maddox had remained at the hall.

“Just relieved,” Cat told him truthfully. “I can hear the stones. I’d begun to worry I might be mad.”

Aled’s dark brows lifted. “You aren’t mad, Cat. I hear the stones, too. It’s why Maddox brought you here rather than tell you who and what you are away from the gateway. The Doubles before you only felt the truth when they came here. It seemed wise to learn from their experience.”

Cat agreed. If she hadn’t heard the call of the gateway’s stones before Maddox told her she needed to pass naked through a waterfall to join another realm, she would have held to her serial killer captive theory.

“So how does this work?” Cat asked, absently nudging a pebble with the toe of her Nike. “I just walk through?” But even as she said it, she heard the denial of the stones. “No,” she said softly. “It isn’t time.” Drawn by the stones, Cat walked to the edge of the gateway’s pool and strained to hear. “I must go to the waterfall and wait.” She glanced to where the late March sun hovered just above the valley walls. Soon, the sun would set and the gateway would open. “I know what I have to do.”

She turned to Aled and pointed to the waterfall. “I have to go.” Cat gestured to her dressing gown. “Maddox explained no clothing can pass through the gateway.”

“I’ll turn my back.” Aled promptly did so, facing the way they’d come as the sun began to slip behind the top of the valley’s wall.

After quickly stripping off her robe, Cat tossed it aside and toed off her trainers, trying not to think about her nudity.

“I’m in Sweden,” she said to herself as she took her first naked step into the water. “Nudism and wild swimming. I’m finally on trend.” She laughed again, then bit off the sound as cold water lapped around her calves. “Man, this is cold.”

Wading deeper, she shivered as water lapped around her thighs, and she picked up her pace, trying not to imagine what the slimy stuff was beneath her feet.

“I should have worn flip-flops.”

Cat gasped when something brushed against her ankle. A fish? Oh, God, an eel? With inelegant haste, Cat bounded in a splashy run toward the boulders at the fall’s base, immensely pleased when she could climb them and leave the pool’s water behind.

Now on the rocks, she swiped her long hair out of her eyes as the spray coated her and she shuddered. She hated eels.

Careful not to fall on the slippery rocks, she rose and balanced as best she could, ready.

The shout of the rocks was deafening in its urgency and had her stepping forward before her mind registered what her body was doing. The sudden dousing of water was forceful and cold. Spluttering, Cat pushed her way through the pounding waterfall. Emerging into a dark tunnel, she tried to orient herself. The stones still cried, their song bouncing off the sloping tunnel she must pass through but, unlike the calming song of before, the words were now an incoherent demand to rush.

Cat obeyed, heading toward the weak graying light at the far end of the tunnel as fast as she dared. Then a figure darted past her in the darkness, a woman jogging, breathing hard.

Startled, Cat picked up her pace and headed for the light. The pressing pop of air that signaled the passing of her Double faded when Cat reached a second waterfall. Lifting her hand, she reached out and let the flow coat her fingers. It was much warmer than the water she’d left behind, but it fell in a heavy, beating torrent, and on the other side was her new home. A soft smile curved her lips, even as nerves coiled in her belly. Home.

Startled, Cat blinked water from her eyes and stared at a powerful, paint-streaked chest intersected by straps of leather that secured sword, quiver, and bow at his back. The shout of men and the clash of swords meeting broke through the beating sound of the waterfall behind her, and Cat jerked her head up to meet the black eyes of the man who gripped her waist.

Opening her mouth to demand what was going on, her breath escaped in a whoosh as she was swept up into his strong arms.

Gripping his shoulders, Cat gasped, her gaze jumping from the man who carried her to the scene around her, and her eyes widened with fear. It was raining hard and on both sides of the pool where soldiers fought, the sounds of the battle loud and disorientating. Many of the fighters’ bodies, both male and female, were streaked with greens and browns like the man holding her, no doubt to camouflage them in the surrounding jungle. The painted warriors’ opponents were all male. They were bare-chested, as the paint-streaked men were, but their lack of paint marked them as a different group. These men attacked ruthlessly, their faces eerily blank in their determination to kill.

With the shiver of clashing metal in the air, Cat cried out as an arrow whizzed past her ear. The man holding her swore viciously and moved faster, leaping from the boulders to land on the closest pebbly bank. Cat grunted from the impact, the air knocked out of her, and stared wide-eyed as painted warriors immediately swarmed around them. A shriek of terror building, Cat began to struggle. On unfamiliar land, surrounded by fierce men, instinct took over. With no way to determine whether the man who held her was Resistance or one of Griffin’s soldiers, she would protect herself.

“Be still,” the man said, gruffly. He tightened his arms around her body as, naked and wet, she fought like her namesake to get free. “Cat, hold still! I am Aderyn. Your husband.”

I can&#039;t say enough how much I&#039;m enjoying this intriguing, sexy series. Sometimes a saga will become stale with nothing new to add, but this is NOT the case with Beth&#039;s writing. Each couple face a new, unique barrier to overcome in their relationship, and the story line becomes more engrossing with each tale. Very much looking forward to more.