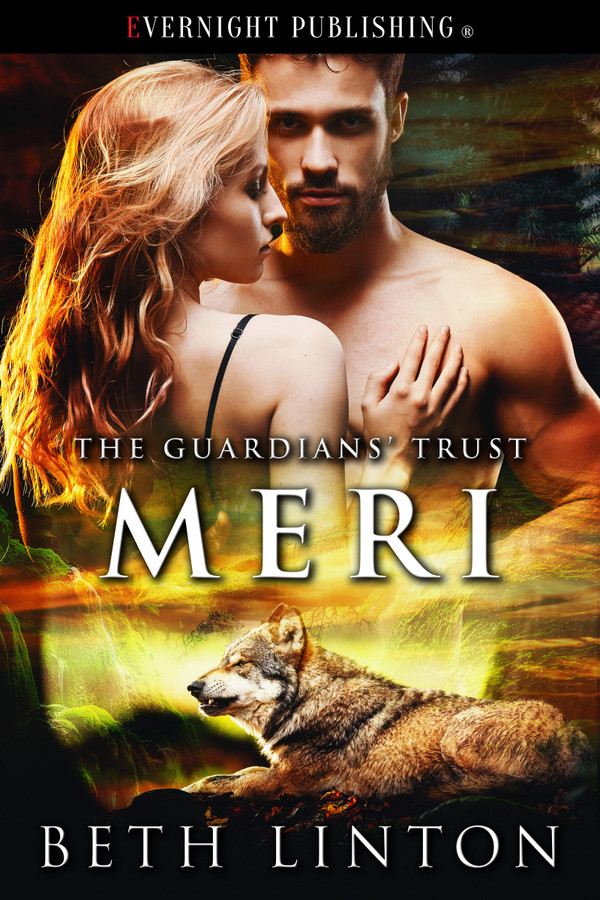 Some women are born identical—one in the human world, one in the jungle of the Other Realm. It is their fate to change places. Book three of The Guardians’ Trust series tells Meri’s story…

IN LUST WITH HER HUSBAND

When Dr. Meri Stevens discovers she’s destined to take her medical skills across the gateway to aid the Resistance, her ordered life is thrown into chaos. She trades the hospital for a jungle, a war, and a husband she craves. Struggling to cope with the changes in her life, can Meri accept love and fulfil her destiny?

Handsome and good-spirited, Cadell uses humor to conceal his desire for a family. Named for Meri, he throws heart and soul into the match and as the Resistance fight for survival, Cadell fights for his future … and soon two wolves join their war.

Hands behind her head, Meri glared up at her bedroom ceiling as tentative morning light reached in through the windows. After Maddox’s announcement last night, she’d listened with growing unease as he’d spun her the most preposterous story she had ever heard: Doubles, a gateway, and an Other Realm fighting for its life against an evil tyrant. When Maddox had confessed to being six hundred nineteen years old, she’d had serious doubts about his sanity.

She’d taken a long drink of the wine he’d given her and then looked to Marc and Cole for sense. She’d found none. Instead, they’d eyed her worriedly, looked at her as though she might break … and she’d known: they believed this fairy tale Maddox was selling.

Her best friend and the family she had adopted as her own were deluded. They thought—no believed—that she was one of these Doubles, that she needed to make this Exchange in two days’ time and step through some freezing waterfall to live in a war zone and marry a stranger!

The Trust was a cult!

Well, she wasn’t buying into their weird religion.

Last night, the sky had been snow-laden, the carpet of white increasingly thick by the time she’d left the kitchen. Too dark and too dangerous to drive, she’d taken refuge in her room.

Across the dim bedroom, she eyed the chair she’d wedged under her door handle. As soon as it was safe, she’d load up her car and head out.

Cocooned in her bed, she rolled to stare out of the window. She’d left the curtains open, and outside, she could see thickly falling white. It was still snowing. White flakes coming down in windy blusters that rattled the small diamond panes of ancient glass.

What if she couldn’t leave?

The Guardians’ Trust was an expanse of forest and hills. The hall sat at the heart of that land, the forest surrounding it. With weather as bad as it was, they were likely to be snowed in.

Meri watched the snow fall and clung to her anger, but beneath it, there was hurt: hurt at Marc’s betrayal, hurt that the family she loved had been ripped away. She could only assume the rest of the family were as entrenched as Marc and Cole were in Maddox’s madness because surely Pryce would have had him committed long ago if not.

Closing her eyes, she sighed as sadness closed in as the snowstorm roiled outside. Beneath her lids, images of her dream rose to comfort her: a dense jungle, its canopy vibrant with life, the scent of spice and heat wafting on the hot wind. Mountains of yellowed rock and terracotta cliffs curving dramatically. And a man.

Meri smiled softly as she remembered the man in her dream.

They’d made love. She’d never had a sex dream before but this one had been fantastic. His body was perfect, bronzed with honed muscle that was hard and hot beneath her hands. He was handsome: his face with strong masculine lines, his hair a dirty blond, and his eyes had shone amber fire as he’d filled her, rode her.

Meri shivered, but this time not from unease. He’d looked at her as though she were his world, as though she had his heart and he craved her. And as their bodies had moved together, increasingly hot and sweaty, she’d cried out his name as she reached for the peak.

She’d called his name in her sleep, the sound waking her from her dream as her body trembled and strained for release…

Meri’s eyes popped open, her memories scattering, when a quiet knock sounded on her bedroom door. She glanced at the clock. Eight in the morning. Marc?

It was Siana, Pryce’s wife. They’d married that May.

Meri considered this. New to the Trust, Siana was probably the most likely to have a memory of sanity and if she was snowed in, she’d need an ally.

She scrambled from her bed and went to remove the chair. After freeing the handle, she pulled open the door. Ignoring Siana’s startled look, she checked the corridor. They were alone. With a swift yank, Meri pulled her inside.

“What are you doing? You can’t seriously think you are at risk here. You’re part of the family. No one is going to hurt you.”

Meri grunted but didn’t shift the chair. Instead, she eyed Siana thoughtfully. When she’d first met her, Siana had been a quiet, almost shy woman. She’d grown in confidence since her marriage. Meri just hoped that confidence was due to her obvious happiness with Pryce and not down to the discovery of a strange new religion, Maddox as its head.

Siana settled on the end of the bed, her dressing gown fastened tightly around her.

“I came to see if you were all right. Pryce told me Maddox spoke to you last night and that you were upset.”

“Upset?” Meri eyed the other woman closely. She seemed normal and balanced. “Siana, I was angry. Hurt that all this has been going on beneath the surface and I had no idea.”

Siana visibly deflated. “No one meant to keep any of this from you. They were going to tell you…”

“I don’t mean I’m hurt that I wasn’t told the story,” Meri corrected. “I mean I’m hurt that the family I love is a cult! You can’t seriously believe…” she trailed off when Siana’s oval face remained all calm, her chocolate eyes steady. “My God! You believe it too!” Meri felt like shaking her. “But how can you swallow this preposterous story? You are an intelligent woman, Siana, an outsider who married into this family. You can’t seriously believe—”

“In the Other Realm?” Siana finished for her.

The stories in this series continue to get better and more intriguing. Every couple face their own challenges as the war intensifies, and there&#039;s something new to discover each and every time. Excellent saga.

We return to the Other Realm as Meri leaves behind everything she knows. Not without a fight though. I loved how upset she was when it was first mentioned. After all, that is the normal, human, reaction, and I think Beth Linton nailed it. Obviously, she goes, otherwise there’d be no story, but going there is only the beginning. So many excellent parts to this story! It was brilliant to see Brenin and Ana again, and to see how their relationship is progressing. The main bulk of the story is how the Resistance is fighting Griffin, plus the attraction and growing relationship between Meri and Cadell. I just with the little trick of smelling your mate when suffering from morning sickness was real! I could have done with that years ago. For the first time, we actually get inside Griffin’s head, which was both unexpected and a gift. Not that I like him, but it was good to see his thought process. We finish with the new Chosen and their reactions. I can’t wait to read Meredith, but these two? Wow!!! Bring it on. A fantastic addition to the series that I completely recommend. Just read them in order so you get the full story and maximum enjoyment!