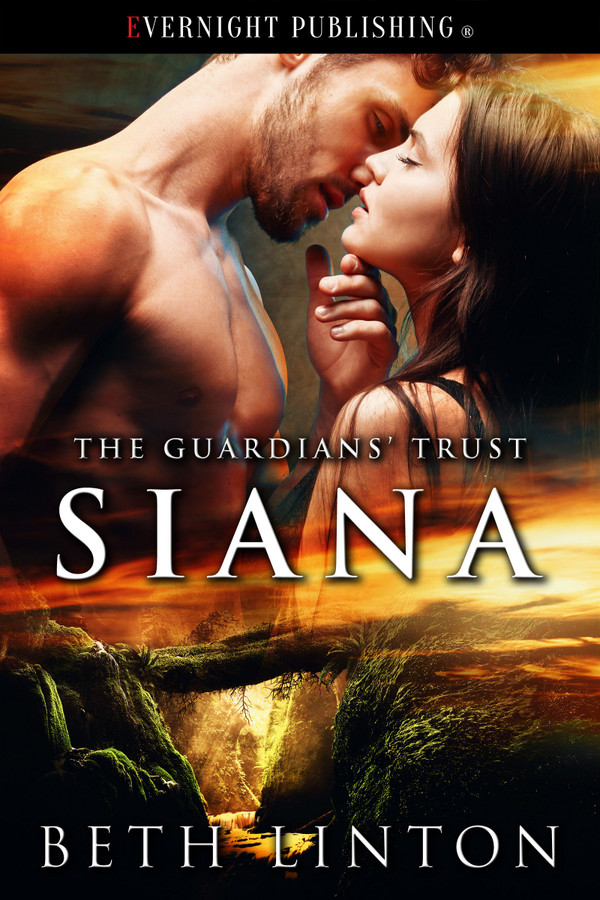 Some women are born identical—one in the human world, one in the jungle of the Other Realm. It is their fate to change places. In book two of The Guardians’ Trust series, Siana embraces her fate with the man born for her…

Siana has never felt safe. A female born into a world controlled by men, she is valued for her womb … until she is rescued. Siana finds peace with the Resistance but then she learns she is to marry—again—and the prospect terrifies her. She must join the Guardians, but is she brave enough to trust fate and let herself love?

HE EMBRACES HIS FATE

Honorable and kind, Pryce welcomes Siana into the family of The Guardians’ Trust, but to win her heart he must earn her trust and teach Siana that he is a man worth loving.

“You think this is funny?” Gethin’s face darkened to match the storm clouds that had been chasing them all afternoon. “You are mine and yet you defy me!”

His reminder that she had been given to him in marriage two long years ago had Siana’s chin lifting. “I may have been forced into this marriage, husband,” she said, “I may legally be your property, thanks to Griffin Fionn’s command, but I will never be yours!”

Gethin gave a growl and took another menacing step toward her. Siana scrambled backward. She knew better than to poke at his temper, but her fear of being forced to return to the palace that had been her home for the first eighteen years of her life was greater than her fear of him.

“You have no idea what you’ve done, do you?” Gethin shouted, his face twisting with familiar malice.

“Don’t you know what waits for us at the palace?” he asked.

Siana’s mind lurched from one bad memory to another. As a female, she had been detained in her family’s chambers since birth. She hadn’t stepped outside, hadn’t been free to talk to anyone but her mother, father, and brother. Then, when she’d turned eighteen, Griffin had chosen a husband for her. Her married life had been confining and violent, but it had gotten her out of the palace.

As one of Griffin’s favored warriors, Gethin had been charged with overseeing the outpost at the temple. The temple was dark and claustrophobic, but she had sometimes managed to go outside—something that would be impossible at the palace. The prospect of the complete restriction that awaited her made her sick but it didn’t account for her husband’s anger.

Gethin laughed, the sound hot and hard as he seemed to enjoy her confusion. “You stupid bitch! You really don’t know how this works? Two years of marriage is deemed more than long enough for you to conceive my child.” Gethin’s hands tightened into fists. “Once we reach the cliffside palace, Griffin will waste little time dissolving our marriage. I will be a laughing stock.”

The blood drained from Siana’s face, the rising bruise on her cheek pulsing painfully.

“Our marriage will be dissolved?” she said, faintly. There was no way Griffin Fionn would allow a female of breeding age to remain unmarried. “What will happen to me?”

Gethin sneered. “You’ll be gifted to the next favored soldier hopeful of an heir.”

Dizziness blackened her vision as she fought the urge to retch. Another husband meant another wedding, another mating ceremony … another two years before she was passed on again if she failed. The marriage she’d endured with this bastard had been hell but she was in no rush to exchange one hell for another.

“I can see you finally understand the cost of your failure.”

Forcing her vision to clear, Siana focused on Gethin’s fist as she tried to think of a way out. His hand flexed and relaxed, flexed and relaxed, as though he couldn’t make up his mind what to do with her now he’d knocked her to the ground and spilled his guts.

And then she knew how she could escape. He’d nearly killed her once in a fit of rage. This time, she’d provoke him far enough that he’d succeed.

Siana made herself smile, the crack in her lip widening. “Oh, I understand completely,” she goaded and spat blood on the ground. “I’ll be free of you.”

For a moment, Gethin looked shocked, and then his reliable temper rose, as she’d known it would. “You’ve grown brave, wife. Fierce.”

“I’ll not be your wife for much longer.”

He folded his arms across the leather vest that signaled he was one of Griffin’s elite, his eyes burning. “Are you so keen to be fucked by another male? Are you so keen to give another the heir you have denied me?”

Above, the gathered clouds gave the first ominous rumble of thunder. When the storm hit, it would be violent and cathartic, washing away the sticky heat that had invaded the jungle as though the sun was trying to scorch the undeserving left upon the Mother’s cherished land.

“You’ll be given to another soldier,” Gethin ranted, half to himself. “You’ll be married, mated, in front of the elite soldiers, as you were with me.” His fists solidified. “If you had just given me an heir!” he bellowed the last as the rain finally began to fall.

“Griffin Fionn might deny the old ways,” Siana spat, “but you know as well as I that rape does not produce a child. The mating bridge must form and taking me against my will does not forge the bond. We reproduce through Affinity, Gethin,” she reminded him of the forbidden truth. “The fact that so few children are being born is proof of the evil ways you and your king have adopted!”

“Blasphemy!” Gethin roared as he took a step closer. “Treason!”

Siana didn’t even flinch. “Griffin Fionn may have taken the throne, he may even view himself as a god, but he is not the creator,” Siana said. “I speak no blasphemy.”

“You were given to me! Griffin’s blessing is enough for you to give me a child!” Gethin loomed over her.

“Have you truly swallowed all his lies?” she challenged, glaring up at him from the jungle floor as the steady patter of rain increased and the ground grew slick beneath her palms. The thin red of her dress became sodden, clinging to her body as the heavens opened to coat them in the Mother’s tears. She cursed the rain when his gaze dipped to her breasts and his fury seemed to take a turn she hadn’t anticipated.

Desperately, she glowered at him through the rain and prodded, “You forget the teachings of millennia for a king’s arrogant words? Affinity is life, not Griffin Fionn.”

Gethin smiled, his expression chilling Siana, and reached for the waist of his trousers. “I think we should test your theory a few more times before we reach the palace, wife.”

Siana’s certainty that he would kill her slipped away like sand through fingers. Why his plan to rape her here on the jungle floor only half a day’s ride from the palace should shock her, she had no idea.

“I’ll fight you,” she said, her bravado, her confidence deserting her as he released his erection.

Gethin’s eyes glittered as lightning flashed. “I was hoping you would.”

About to lunge, he froze in place as thunder boomed. His eyes widening, he sank to his knees. Seeming bewildered, he looked at Siana and then down at his abdomen. Siana’s eyes followed, her mouth falling open as she saw the spear that protruded there.

“Siana,” Gethin garbled as a froth of blood emerged from his lips. “Help me.”

As the whoop of the Resistance echoed with the storm and painted warriors spilled from the trees, Siana lay back in the dirt and laughed.

Beth intricately and expertly weaves between two worlds in this saga. She handled the delicate story line with Siana and her connection to her mate with tenderness and beautiful emotion. Although a complete story in itself when it comes to the couples, readers will absolutely want to know more.

Siana was given in ‘marriage’ and raped in front of a galley full of men. How on earth can she be expected to marry again? This is the second book in The Guardian’s Trust series, and this time we follow Siana to the human realm as she tries to follow her new path. Simply put, this was amazing! I loved how caring and gentle Pryce was from the beginning, his anger at the treatment Siana went through, and his determination to do the right thing. Siana is a brave, scared, woman, and who wouldn’t be after the things she has endured. The best thing for me was the slow-burn. The slow building of trust, love, and support given to each other, by each other. The attention to detail is second to none, and for that reason, I can’t wait to read more about those two men and the missing women. Of course, I’ll probably have to wait for Meredith, as the next book will take back to the Other realm, I think. A fantastic addition to the series I have no hesitation in recommending