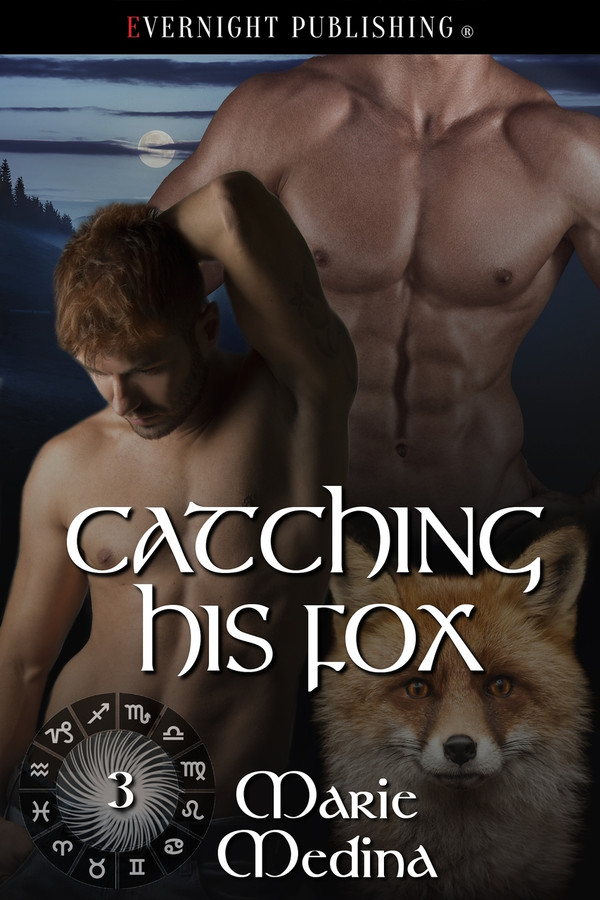 Seeing both of his brothers find happiness with their fated mates has convinced Byron that he can’t simply go on doing nothing. He found his fated mate five years ago, but a tragedy kept him from confessing the truth to Kit. He decides to go back and take a chance, unable to go on living with nothing but dreams of what he could have with his mate.

Kit has lived a quiet, withdrawn life since his parents and brother were murdered, but he’s beginning to wonder what else is out there for him in the world. He’s stunned to learn he’s a vampire’s fated mate, but Byron wins him over quickly with his kindness and patience. Though he isn’t sure he can accept the mate bond yet, Kit sees his chance to explore the world as he learns more about this gentle vampire who has waited five years just to be with him.

Everything was dark. Kit heard an animal crying in the distance. He reached out but couldn’t find anything to hold to. Someone grabbed him by the wrist and yanked him close. He could feel hot breath on his neck, sinister laughter in his ear. Struggling, Kit managed to yank free but stumbled and rolled down a hill. The ground was cold and wet, and he felt rocks cutting and bruising him.

Blood trickled over his face, and he frantically tried to wipe it away. His eyes stung, and he blinked repeatedly even though he still couldn’t see anything. He could hear his heart pounding, but he also heard someone moving close by. He got to his feet and ran.

Falling again, Kit lay stunned until a hand touched his cheek. The touch was gentle, yet it turned deadly as that hand wrapped around his throat. He could hear the laughter again. A dark figure hovered over him, and he tried to cry out for help.

He could finally see a little bit. He was in a cave, the shadowy figure only partially obscuring the entrance. At the mouth of the cave, someone approached. The man watched the struggle, and Kit tried to say something. As he turned away and left Kit to his fate, his face became clearer.

Kit could hear his own cries as he came awake and tangled in the covers. He yanked at the sheet that held him captive, but soon strong arms came around him and stilled his movements.

The vampire’s whispered words floated to him through the darkness. A noise made Kit jump, but he realized it was a match being struck when he saw a flicker of flame in his peripheral vision. Byron sat behind him on the bed and held him close with one hand. Kit tried to untangle himself, and Byron loosened his grip and tried to help.

Kit hadn’t been this embarrassed when he’d kissed the man earlier. He couldn’t seem to make himself turn around and face Byron.

“Are you all right?” Byron asked.

“Yeah. I have these dreams sometimes. I don’t know, maybe four or five times a year.”

“You’re probably feeling a little stressed. With all that’s happened because of me.”

Kit closed his eyes, thinking of seeing Gregor turn away from him in his dream. He shook his head and made himself look at Byron. “Don’t blame yourself. It’s a dream. Nothing more.”

“You being upset isn’t nothing, no matter the cause.” He shifted to lean back on the headboard. “You want to talk about it? Maggie had to run out. A child with a fever.”

Kit took a deep breath and changed positions on the bed, just as it dawned on him that he and Byron were both shirtless. The tall, lean vampire had an impressive physique. He was actually far more muscular than Kit had imagined. The dusting of dark hair on his chest drew Kit’s eye, and he looked down at his hands to keep from staring. He felt very small beside the other man. He worked hard in the garden and around the homestead, but he had an almost petite build, as most fox shifters did.

“It was like most of my dreams, but I guess recent events did change it. Somewhat.”

Byron’s voice was so gentle that Kit wanted to move forward and snuggle into his embrace. But the vampire was already being so patient he didn’t want it to seem as if he was … taking advantage? Kit stayed where he was, confused about what he was feeling. He swallowed, trying to focus his thoughts. Looking up, he said, “Usually, it’s someone unseen trying to hurt me. Or memories from that night. This time, I saw Gregor. I was being choked, and Gregor saw me but didn’t help. He walked away. That’s when I screamed.”

“I see.” Byron folded his arms over his chest, hugging his upper body. “Guess the interpretation is pretty obvious.”

Kit’s chest ached. He felt like crying but didn’t want that to happen. He’d cried about Gregor in front of Maggie, but that was different. “Almost seems easier to lose someone to death.”

Byron came closer and enfolded Kit in a hug. Kit rested his head on the vampire’s shoulder, trying to keep it together. “I can see that,” Byron said. “But maybe you haven’t lost him. Not the way it seems you have.”

Byron ran his hand over Kit’s hair twice before resting his hand on Kit’s shoulder. “Don’t apologize. Don’t feel bad about any of this. All right? If I do something, it’s because I want to, whether it’s coming in here to check on you or taking you with me tomorrow.” He paused. “You still up for it?”

Kit pulled away enough to look at Byron. “Yeah. I need a change of scenery.”

“Can I get you anything right now?”

Blow out the candle and hold me until I fall asleep. Kit wanted to ask for that but couldn’t. It didn’t seem fair to ask Byron to stay in his bed when nothing would happen. Or would it? Seemed it would be easy to kiss Byron and pull him close, let whatever might happen just happen.

I have really enjoyed this series, and loved the brothers that were the main characters in this set most of all. I loved Kit, and I also loved how patient and caring Byron was towards him. This was very sweet and I definitely enjoyed it!