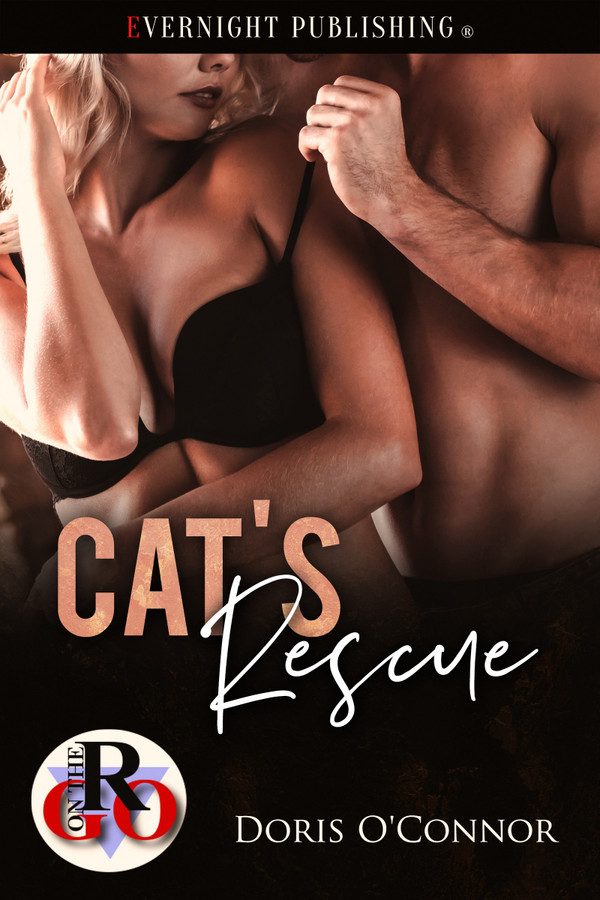 What’s a girl to do when her elderly neighbor’s beloved Miss Pitty Pat seems injured and stranded on the ledge outside in the middle of the night? Rescue her, of course. Never mind the small matter of being afraid of heights, and ending up stranded on that ledge in nothing but a sexy negligee.

Firefighter Rhys can’t quite believe his eyes when he sees the hot as hell school teacher from across the road seemingly stuck on a ledge. There’s only one thing to do. Get his little Cat off that ledge and finally make her his. After all, she is now at this Dom’s mercy, and it’s only proper to spank that luscious ass for scaring him half to death. Cat’s rescues have never been such fun.

Cat knew the feminist in her should be outraged at the way Rhys was manhandling her, but that side of her brain seemed to have stalked off with as much indignation as Miss Pitty Pat. Damn the feline for getting her into this predicament. Rhys must think her a right fool, and no way would he miss her body’s reaction to him. She might be half-frozen, but this close to him every feminine cell in her body sighed in submission at this man’s dominance. Flung over his shoulder like a sack of spuds Cat had the perfect view of his ass, and she said a silent prayer of thanks that this was happening in the middle of the night, and no one else could see her large backside displayed for all to see. As it was Rhys would no doubt notice how wet she was.

That thought should mortify her, but it had the opposite effect on her wayward hormones. Cat wasn’t skinny by any means, and she’d long since come to terms with her curvy shape, even if she chose to hide it under sensible clothes for work. The wild side of her that indulged in buying sexy lingerie and bought erotica on her e-reader faster than she could read it, seemed to have been well and truly awakened by Rhys’s close proximity. Or maybe being upside down simply meant all the blood that rushed to her brain, affected her ability to act like a fully grown, responsible woman. She felt more like a giggling schoolgirl, who kept squeeing inside at being carried off caveman-style by the man of her dreams.

Would he really put her over his knee, and why did that thought make her insides tighten in need and her heart beat faster? This was insane, that’s what it was. Lusting after him from afar was one thing, but he couldn’t have meant his earlier comments of finding her hot, could he? Besides, she wasn’t ready to be another notch on his bedpost, and surely that’s all this would ever be?

Men like him didn’t settle down with far too sensible schoolteachers who had a hidden penchant for kink. That only happened in the romance novels she liked to read. No, this was real life, and her secret fantasies of his declaring his undying love for her, were just that—wishful thinking on her part.

Rhys whistled to himself as he unlocked his front door, and stepped through. Muted lighting came on, and Cat got a brief view of tiled flooring, a narrow hallway, and steep stairs. Then the world tilted as Rhys slowly slid her down his front, grasped her ass and yanked her up onto her tiptoes. She had no choice but to make a grab for his rock-hard biceps to stop herself from sliding to the floor in a pool of feminine goo. There didn’t seem to be an ounce of fat anywhere on Rhys’s body, and her pussy clenched in need, when the long, hard length of his erection dug into her belly.

“Oh, my.” Rhys threw his head back and laughed, and Cat wanted the ground to swallow her up whole. Had she said that out loud? It seemed so, because Rhys’s full lips curved into the most sinful smile, and Cat couldn’t tear her gaze away from the startling contrast his white teeth made against the ebony hues of his skin. Stubble grazed his jaw, and he squeezed her tender ass a few more times before he let her go and pushed her down on one of the kitchen chairs, and shrugged out of his uniform jacket.

Cat bit her lip as she got a close up view of the play of muscles under his tight vest top, and her fingers itched to explore the intricate swirls of the tattoo wrapped around his left bicep. Rhys draped his jacket over her shoulders. It was still warm from his body, and suffused by his scent, mixed in with the faint smell of smoke, it wrapped itself around her like a comforting blanket. She couldn’t suppress her sigh of appreciation. Especially as this close to him she had a direct view of the massive bulge in his jeans. Her throat went dry, and she couldn’t tear her gaze away from the outline of his long cock straining against the worn denim. Lord, he looked huge, and she would leave a wet stain on his chair at this rate, as her pussy clenched at the thought of him inside her. Maybe he had meant what he’d said earlier then. Cat screwed her eyes shut and barely suppressed a sigh. This was insane. She had to put a stop to this, whatever this was. No good would come of this.

Rhys tipped her head up to make her look at him, and goosebumps raced across her skin at the way he groaned, as though he, too, felt this pull between them.

She could no more not obey the gentle, yet unmistakable command in those deep tones than she could stop breathing, and when her eyes fluttered open, the obvious approval she read in his amber gaze raised her temperature up a few more notches.

“That’s my girl. I’ve turned the heating up, so you should soon be toasty, and then we need to look at those scratches. In the meantime, a hot chocolate should do the trick quite nicely, right?”

He winked at her, and turned around to grab the milk from the fridge. No instant hot chocolate then, but honest-to-goodness hot cocoa. Not that she would need it soon, not the way her body heated and every erogenous zone she possessed tingled in his presence, as she watched him prepare the drink.

Belatedly she caught onto one facet of his last sentence.

“What scratches?” she finally asked.

Rhys turned the heat on the stove to low and turned around to look at her. Only then did she notice the long scratch marring his hand.

“Miss Pitty Pat got you? Oh, no.” She made to rise from the chair, but Rhys stepped closer and with one large hand on her shoulder pushed her back down on the chair. “Ethel will be mortified. That’s so unlike her, she…” Cat lost her train of thought, when Rhys got down on his haunches in front of her. The faded denim stretched across his massive thighs, and she whimpered as he adjusted himself with one hand.

“She didn’t just get me, little cat. May I?” Before she could even grasp his full intentions, he’d pulled his jacket off of one her shoulders, taking the thin strap of her night attire with her.

Cat hissed through her teeth as he trailed his fingertips along a sore point across her shoulder, and lower still until he skimmed across the swell of her breast. Her nipples puckered into hard nubs of pure need, and the left one in particular stung like crazy. Shards of pain darted straight to her clit, and Cat squirmed on the chair as Rhys explored the long gash marking her own skin.

“Sshh, my sweet little cat, I’ll take care of that, but first let’s clean this. I don’t want it getting infected.” He flicked a glance up at her all the while keeping up the gentle exploration of her skin, until Cat was so turned on she wanted to jump his bones there and then. “You didn’t realize she got you, did you?” he asked, and Cat shook her head.

“Too terrified of the heights?” he asked with another grin.