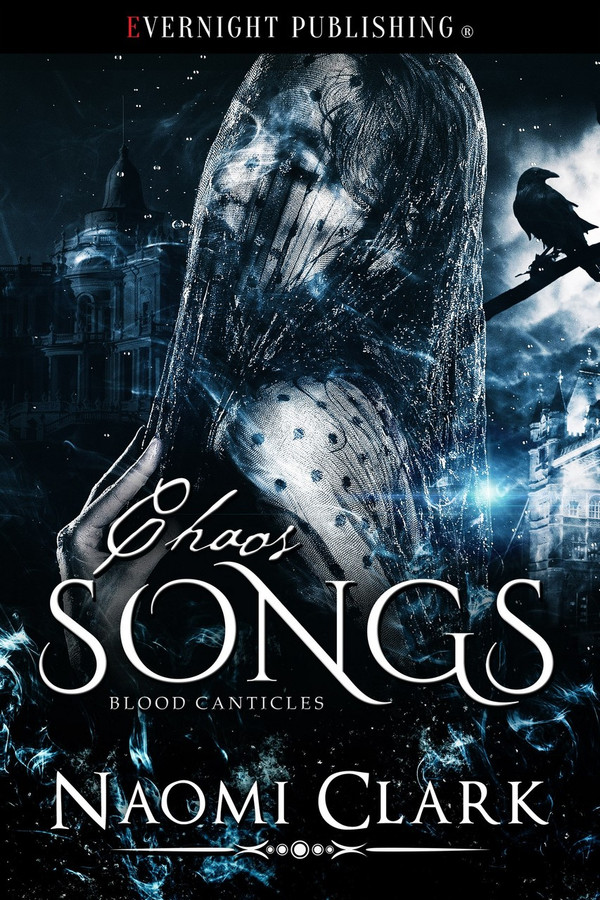 Chaos magic makes anything possible. Even the unthinkable.

Lola and Tristesse have defeated one enemy, but Gehenna isn’t finished with them yet. A way home seems impossible. And while Lola struggles with the magical bond she forged with the mysterious patrons, the Shrouded Guard are still hunting them down.

Forced into strange alliances with rebel demons and an underground cult, Lola and Tristesse must decide what they’re willing to do—and to sacrifice.

The snowy banks of the Dead Lake were stained red. The ruby rays of the rising sun glowed brilliantly off the blood, turning it a deep, violent crimson that would have been pleasing to Tristesse once. Now it made her uneasy.

She was tired of blood.

But the demons had to come down, so she hefted the axe once more, driving the blade deep into the thick wooden stake in front of her.

She'd already chopped down two of the tall stakes. They'd crashed onto the frozen surface of the Dead Lake, sending tremors of fear through her, but the ice had held. The demons impaled there hadn't made a sound. They still didn't make a sound, nor make any attempts to free themselves. But their blood spread across the ice and seeped into the snow, proof of their immortality and their torment.

Once she'd chopped down one more, she'd get them off, she promised herself, swinging the axe again. She just had to work up the courage to step out onto the ice. Her fear of it breaking, of the lake regurgitating its own dead, clenched like hot fingers around her heart.

Her hands were raw and frozen, bloody from gripping the axe so long. Her body ached, recent wounds taking their toll. But the ache was good. The exhausting activity kept her brain quiet. It had been dark when she started, a perfect, moonless dark that suited her mood. She'd left Lola sleeping in Thorn's chapel, dead to the world, the way she always slept now. Tristesse felt like she never slept. Her mind threw too many memories at her, keeping her forever on the edge of anxious wakefulness.

Tonight, the need to hold those memories at bay had driven her out here. For a week, she'd stared out across the killing field of the Dead Lake and told herself she would do something, that she would undo Sonneillon's cruelty. For a week, she'd found herself too bone-weary to do it. But tonight, tonight, she moved as if possessed. Tonight, she could no longer do nothing.

One more swing of the axe drew a painful creak from the pole, and Tristesse gritted her teeth as she dealt the final blow. A grim satisfaction filled her as the pole fell, away from the lake so it thudded into a thick bank of snow with a muffled thump.

Her satisfaction vanished when the demon impaled on the stake began to scream.

The sound scraped on the inside of her skull. She dropped the axe and rushed to the demon's side. "Stop it!" she ordered, to no avail. "Damn you, stop it..."

She didn't know why the screaming alarmed her. They'd seen nothing, nobody, since their arrival here a week ago. Perhaps it was just that the sound was so haunting, so eerie in the silence. Perhaps, as with the blood, she was simply tired of screams. Either way, she had to stop it.

Dragging the demon off the stake was a long, harrowing task that lead to more blood, more screams. By the time she'd eased the poor creature completely free, her ears were ringing and her hands were crimson. The wretch's emaciated and broken state made it impossible to guess its gender, but the remains of its ruined finery told her it was of noble rank. The stake had been driven through its torso, piercing one lung, and it was missing one eye. The eye socket was caked with dried blood, the skin around it torn and snatched away. Birds. They fed on soft meat first. The wretch looked to have been here long enough to have lost eyes and tongue several times over.

Tristesse knelt in the snow, the demon's head cradled in her lap, and wasn't sure what to do next. She hadn't thought past freeing them. They would all heal in time, of course, but in the meantime, what was she to do with them? Supplies were scarce and Lola needed good food more than demons did, even these pitiful demons.

The wretch had stopped screaming. It whimpered now, hands clawing weakly at her filthy robes, as if in supplication. It saddened and sickened her. She was not naturally compassionate, and the sensation of rage she felt on behalf of this ruined noble, the urge to fix it, to fix all of it, left her shaken and unsure. How did she fix it? How did she even start?

She gazed out at the forest of stakes, each one bearing another ragged, bleeding prisoner. It was possible not all of them were Sonneillon's victims. It was even possible, she supposed, that some of them deserved their punishments. It didn't matter. It just didn't matter. She was tired of pain, tired of sadism, tired of the uncaring brutality of immortals. She had to fix it, somehow. Freeing them was a start.

She stood and went to retrieve her axe.

The plot is fast paced and gripping. Among the entries in the series, this one reveals Tris&#039;s personality the most. The many threads in the world building and lores come together nicely. Very excited for the next one!

Night and Chaos by Naomi Clark