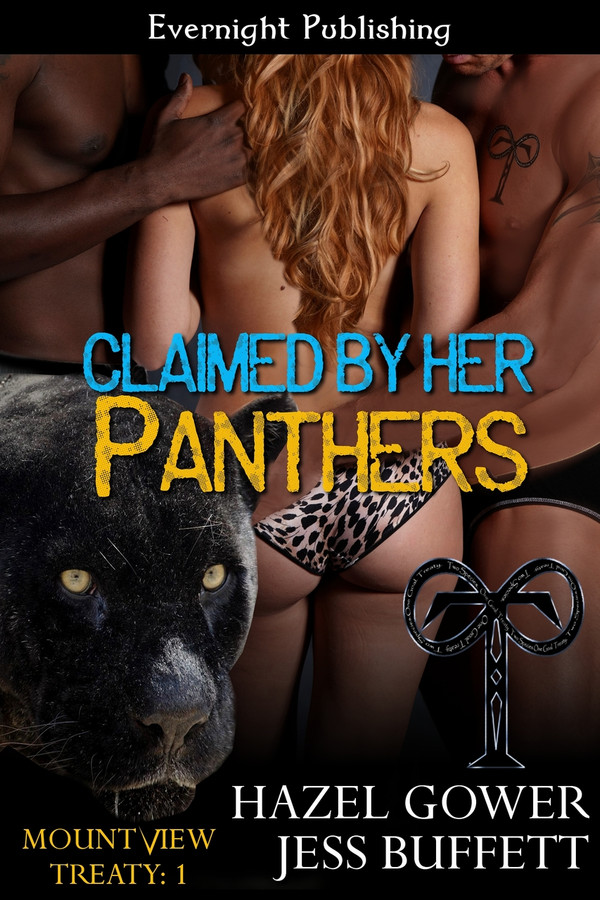 Stephan Black and Owen Slick have known Angelica Deven since the day she was born. Caring for their best friend’s younger sister has always come naturally to the two panther shifters, but the last thing the men expect to discover on Angelica’s twenty-first birthday is that she is their fated mate. To Angelica, the only thing more shocking than Stephan and Owen admitting they want her, is her own reaction to the men as they stake their claim.

Thrust into a world of the supernatural, where things she believed to be fairy tales are real, Angelica must learn to cope, as well as learn what it means to be mated to shifters. Will Stephan’s and Owen’s need to protect their mate from everything cost them the one thing they have always wanted? Or will Angelica realize that nothing will ever compare to being claimed by her panthers?

It’d been a year since he and Stephan had had it confirmed Angelica was their mate. At first they’d fought over who should claim her. Then when they figured they could share, they fought about what they should do and if they were going to do anything and if they did where they would live, and what Joel would say and do. They had bought a place at the base of the mountain and spent the last year doing it up. He and Stephan had moved in a couple of months ago and knew they were now ready to claim Angelica. They’d figure out everything else eventually, they hoped.

“I don’t think we can keep scaring off all Angelica’s boyfriends, or potentials.”

Owen gave Stephan a death glare. “My panther says differently. I say differently. She’s our mate. Angelica should be with us.”

Stephan raked his fingers through his sleek back hair. “I know, but she has no idea what we are, let alone that she’s our mate. The council didn’t want her to know as Joel moved them from the mountain.”

“I love Angelica. I want her with us, at our house, in our bed. I’m sick of sleeping alone.”

Stephan moaned. “I know how you feel. I feel the same. But what do you think our reception will be when she finds out we followed her here? This is a better club than the biker bar she was in the other week.”

Owen shrugged. “I’d like to say she’d be happy, but lately she’s been getting snappy with us. She bit my head off the other night when I answered her phone and told the guy on the other end that she was taken and to not call again.”

Stephan grinned. “I say we mate Angelica tonight and tell her what we are. She can bite me anytime then. I can’t hold myself or my panther back any longer. I need Angelica to stay sane.”

“I’m glad you said it first because I’ve been trying to not act like a prick and throw her over my shoulder and claim her without you.”

Jenika, one of Angelica’s friends, pulled Angelica away to whisper something in her ear. Angelica laughed, and her lips turned up in a wicked grin. He and Stephan weren’t fans of Jenika. She was the wild one in the bunch, the one who just the other week had dragged their mate to a biker bar.

Not liking the nod Angelica gave Jenika, Owen stood and walked from his hiding place to his mate.

“Angelica, your cock blockers are here.”

Stephan snarled, showing his sharp teeth to Jenika, who stared daggers at him and Stephan.

Owen’s breath caught in his throat at the sight of his mate up close. She was gorgeous. Angelica wore a little black dress that fit every one of her curves on her very shapely body. Angelica had light olive skin, with freckles scattered over it, long flowing strawberry blonde hair that had a slight wave to it, a plump bottom lip, and a thin top one. Angelica was large were every man wanted her, breasts, thighs and arse. She had a small tummy and wide hips. Her head came just to his shoulder, and as Angelica looked up at him she narrowed her eyes and placed her hands on her hips.

“You do know that when my brother asked you two to look out for me, he didn’t mean for you two to follow me out on my girls’ night out? I’m not at the biker bar. I can look after myself,” Angelica yelled over the music. Jenika shook her head and strolled off.

“What the hell are you wearing?” Owen couldn’t help the snarl in his voice.

Angelica tapped her red stiletto heels, and if looks could kill he’d be dead.

Angelica rolled her eyes. “Well hello to you, too. Why on earth are you two here? Don’t you have jobs? And what are you talking about?”

Owen didn’t think. He grabbed Angelica by the waist, lifted her, and almost sprinted out of the club.

“Put me down this instant, Owen. What the fuck do you think you are doing?” Angelica wiggled around in his arms and banged on his chest.

Owen’s body came alive, burning with the need to claim her. They walked out of the club, and not one person tried to stop them. He didn’t know if Stephan’s fierce stare had anything to do with it, but he didn’t care.

When the night air hit him and Angelica’s yells for help could be heard more clearly, he did the only thing he could think of. Owen took Angelica’s lips to his, stopping her tirade. Her fists stopped whacking him, and her legs stopped kicking him. She seemed stunned at first and didn’t respond. Then he moved his hands down and patted her arse. She gasped, and his tongue slipped in and sought hers. Slowly her hands slipped up his chest and came around his neck holding him closer to her.

“That’s hot.” Stephan groaned. “I can smell our mate. She likes what you’re doing to her. Let’s get her home. I want a taste so bad.” Stephan’s words seeped through Owen’s lust-filled fog, and he reluctantly pulled away.

“Come on, sweetheart. We’ll finish this at home.” He kept a hold of Angelica and walked to his car.

Angelica stared up at him with passion filled eyes and a dazed look. “Um … why did you do that?”

Owen winked down at her. “Why do you think I did that?”

Panther shifters Stephen Black and Owen Slick have always helped their best friend Joel take care of his baby sister. Somehow they could never resist her, especially after Angelica and Joel’s mother passed away when she was young. But no matter how they and their panthers feel about her they never expected to suddenly find out she was their destined mate on her twenty-first birthday. Angelica can’t believe the sudden change in the guys. She’s always looked at them as additional brothers but after an unexpected kiss she’s suddenly seeing a whole new view of them. Why had she never noticed how attractive they both are and why do they suddenly have her libido going crazy. Hearing she’s their mate and that they’re both shifters is crazy enough but when she finds out that other creatures that go bump in the night are also real it’s almost more than she can believe. But her life may depend upon them convincing her. This was a really fun book. I loved seeing the history of Stephen and Owen with Angelica and how much she means to these men. I also really liked that not everything goes perfectly smoothly for the three of them and that Angelica wasn’t just going to say oh ok and not question this new reality she’s being shown. Not to mention the great side characters that are introduced in the book and the touches of humor they bring to the story. There’s also plenty of heat between the three and it practically steamed up the pages. As good as their story is you can definitely tell that this is the first book in the Mount View Treaty series and that it’s laying the ground work for future stories that I’m going to be watching for. I’m really looking forward to Jenika’s story!

Passion and thrills abound in this mesmerizing paranormal romance. Angelica Deven is thrown into the world of shifters when her brother’s two friends suddenly claim she is their mate. Not only is she supposed to adapt to a world she never knew existed, she also has to accept having not one but two overprotective mates. This fast paced and smooth flowing plot keeps readers intrigued with suspense, drama and passion. The authors describe the story with well written scenes and events that capture the imagination and the strong compelling characters are easily related to and grab the reader’s attention. The chemistry between Angelica and her two panthers, Stephan and Owen, singes the reader with heat from every page and the frequent sex scenes including m/f/m and anal sex scenes are hot enough to burn down the mountain. The relationship starts off rocky and has several hurdles to be crossed which cause some pretty dramatic and entertaining scenes. The story also has lots of funny and snarky dialogue, especially when Angelica’s best friend is around Stephan and Owen. The authors have created a fascinating world with some intriguing elements and concepts and the characters captivate the reader drawing them further into the story. While I found this story to be a little too short to do it justice, I found the story to be enjoyable and entertaining and I am looking forward to reading the next one.