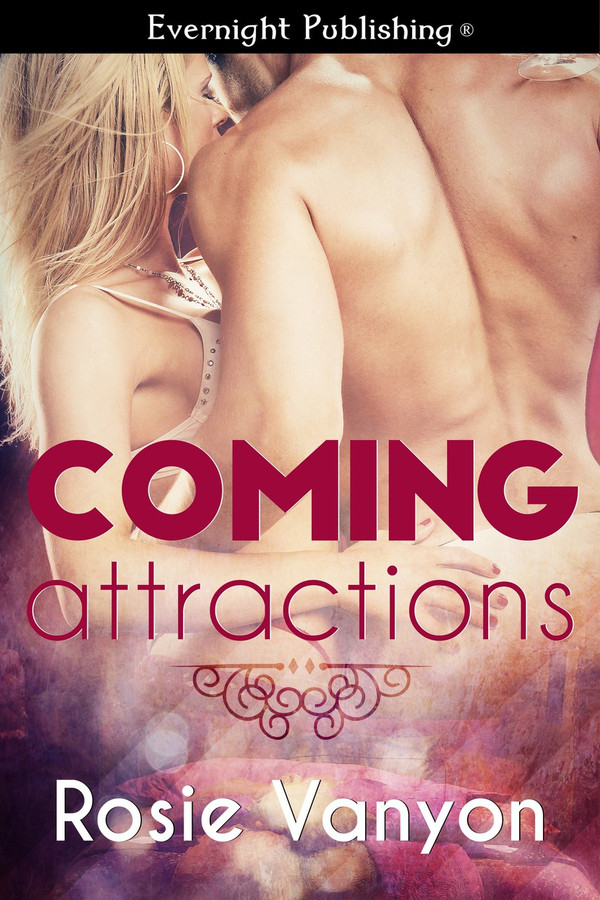 When Levi discovers Cara sleeping naked in one of the sensuously themed rooms, the two embark on a collision course that can only end up in flagrante.

Cara is a nomadic loner, too afraid to commit to family, a home—or even a potted begonia.

Levi is a player—a womanizer and entrepreneur. He needs a lot of money, fast.

So, when sparks fly between the unlikely pair both in and outside of the various sexily-decorated bedrooms, Cara can’t help wondering if Levi’s insatiable interest in her is real—or if it’s just her missing inheritance he’s chasing.

She was practically naked—the last pastel pink scrap of lace hid nothing. He could see, touch, taste everything. And yet there was something incredibly intimate and romantic about the slide of his fingers beneath the waistband of her panties, the slow drift of lace and fingertips over her thighs, the feel of his breath against her center.

She was desperately aroused, screamingly eager, wet and hot and throbbing for him. Her clit was puckered tight and the muscles inside her were clenched with anticipation.

He let her panties slither to her ankles, clasped the cheeks of her butt, and pressed his scorching mouth hard and without warning against her wet sex. His lips were apart and he sucked her inside his mouth—the whole plump folded core of her—and his tongue probed unerringly to her clitoris. The feel of his mouth was the most incredible pressure she had ever experienced. The fast, sure flicking of his tongue inside the full suckling of his lips almost drove her out of her mind. She had not known there was pleasure like this to be had.

Her whole body was flushed with longing, her breath was growing irregular, and her pulse was breakdancing all over the place. She could feel the tantalizing edges of orgasm fluttering around the limits of her excitement. But she needed more. Something to tip her over that exquisite, elusive precipice.

“More...” she gasped, clutching at his shoulders as he pressed his face between her thighs, maintaining her pleasure. But even as she begged, she had no idea how he could deliver what she needed. His ministrations were already utterly and deliciously absorbing.

She clung to him, a single drop of perspiration trickling between her engorged breasts as she gasped her need.

“Please…” The word was thin and strangled. She wasn’t even sure what she was asking for.

He slid his right hand from her buttocks around her hip and across her thigh. With nothing more than a gesture, he commanded her thighs apart and, lost in a maelstrom of lust, she mindlessly acquiesced. She felt utterly wanton standing before this man, legs spread while he thrilled her with his talented mouth, his hand stroking relentlessly up and down her thighs.

His fingers traveled lightly, teasingly, sometimes grazing the trimmed hair at her center, occasionally brushing the fleshy entrance to her feminine core.

She could barely catch her breath now and she felt dizzy. Her throat was clamped shut and the razzle-dazzle of dancing lights behind her eyelids told her she was close to losing consciousness. She was no longer holding his shoulders for balance and encouragement. Instead, her fingers dug into his skin for support, and as a desperate plea for him to take her where she needed to go.

He didn’t hesitate. On the next upstroke between her thighs, he drove his finger deep into her sex. Plunging the digit once, twice, thrice into her soaked and scorching channel.

And then she flew apart. The orgasm rocketed through her like a searing star shower. There was no room for thought. Her release was pure sensation, so intense it was almost painful, so complete it was practically spiritual. The spasms rocked the depths of her very being and even as they began to subside, she knew what Levi had given her was a gift both precious and rare, and that the experience had changed her so profoundly there was no return.

Gently, lovingly, he helped her to the bed, easing her quaking body down on the silken covers, sliding beside her and gathering her in his arms. Slowly, as though from far, far away, she came back to herself. First she noticed the warmth of his body in the cool air of the room, the scuff his body hair against her smooth skin, the soothing glide of his fingertips over her quivering arm and her hip. His heartbeat beneath her ear was a perfect counterpoint to the rain thrumming against the window. His breath tasted faintly of mint and wine and her own musk. Her breathing slowed to match his lungs’ steady rhythm and her trembling began to abate.

“You look beautiful there,” he murmured against her hair. “Your golden hair spread all across the bed, your skin glowing, your lips swollen...”

His hands emphasized his words, stroking her body more intently as he spoke. Of their own volition, her fingers followed suit, trailing over his skin, mindlessly exploring the bulges and hollows of his body. He shivered when her short fingernails skimmed his nipple, gasped when she trailed her index finger down his hip toward the waistband of his briefs.

There was no mistaking his arousal. The thick length of him spasmed every time her hand drew close, and there was a tell-tale spot of dampness near the tip. Enjoying his responses, she teasingly drew her fingers around his belly and down the edges of his jutting hipbones, across the elastic of his underwear and up and down the arrow of hair between his navel and the stretch of blue fabric. He hissed and growled and squirmed under her ministrations.

“You are going to drive me completely insane,” he ground out, but he made no move to hurry her or change her agenda. She could see the pulse leaping at his throat, the desperate bob of his Adam’s apple, the sheen of sweat glistening on his brow.

She smiled saccharine sweetly at him and deliberately brushed her hand over the bulge in his pants.

Was he actually panting?

She quirked an eyebrow, her gaze all delighted mischief. “It’s hard to be sorry when there’s this tempting package right in front of me, just begging to be unwrapped.”

“Oh, I’ll unwrap it all right, but I like to open my presents in my own sweet time. I enjoy prolonging the anticipation.”

She scuttled up his body and swallowed his groan in her mouth from her position beside him. The taste of him was complex and addictive. His lips were clever and intuitive. His tongue was thorough and tempting. Cara felt as though she could stay here, kissing like this, lost in Levi forever.