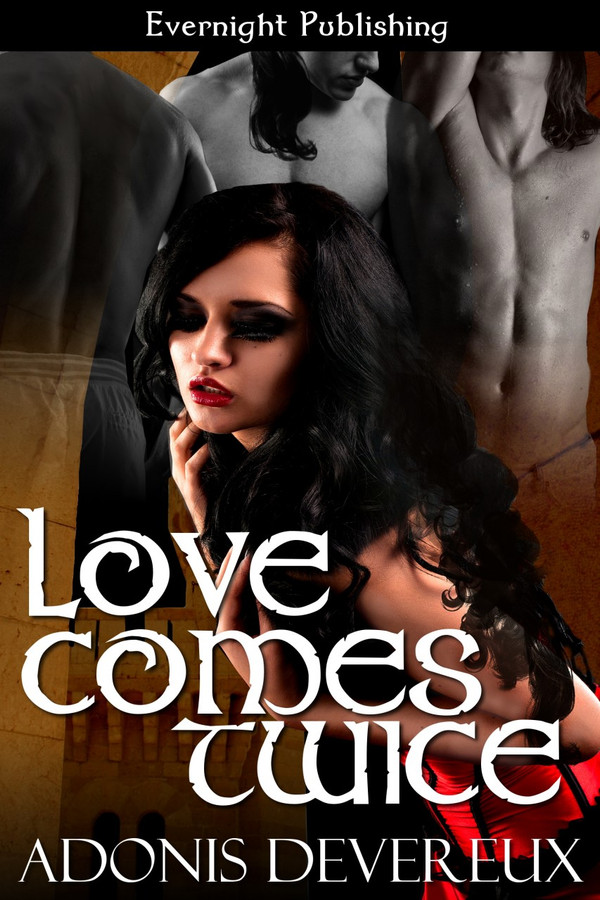 Found sleeping beneath the ice by a dying king, Riane has always known she was different. She draws men to her, her every movement a call to sex, but no man has ever stirred her blood until Kiltarin, the son of the God-King, comes to her. He brings color to her life, and she brings unspeakable sexual delight to his. Her beauty gives him courage to overcome his fear of his own immortality. But her true identity is still unknown, and when the secret of her birth is revealed, Kiltarin fears he cannot compete with the new rivals for her affection. And Riane cannot soothe his fears, because for her, love comes twice.

The discrete metallic notes of a simple children’s song led Kiltarin out of his dream, but he did not want to leave. He lay between Riane’s legs, kissing over her shoulders, across her neck, and down her breasts, nibbling at her hard nipples. He stroked his cock, exulting in its growth, preparing himself to enter her. But the music that his mother had hummed to him as a child beckoned him, and he knew he had to wake.

His eyelids slid open. The indented, jagged wall of the mountainside glowed in soft firelight, and the crackling of burning wood filled his ears. Kiltarin lifted his head and looked around. The first thing he did was remove his hand from the shaft of his stiff cock. He had been stroking it in his sleep. Riane’s dry cloak lay over him, and it surprised Kiltarin that he did not feel the uneven, rocky ground beneath him. He rolled half over and found Riane’s traveling clothes beneath him, and under that spread a thick bed of heather grass.

Surrounded by Kiltarin’s clothes laid flat across nearby rocks, Riane sat by the fire and listened to the music box’s slowing melody. Kiltarin could not see her face, but he could tell by the tilt of her head that she watched the silver figurines spin around. Just as he had first seen her, Riane was naked, her hair her only garment.

The desire of his dream had not fully left him, and now it returned like the flash of lightning, feeding his lust, engorging his cock with blood. The penis grew so hard that it became a bit uncomfortable. He needed relief. The image of Riane’s lips wrapped around his cock, of her tongue licking up the pole, filled his thoughts, and his hand moved back to his crotch.

Kiltarin gritted his teeth, growled at his own weakness, and banished the memory.

“Did I ever tell you about that song?” He had to get his mind on something else.

Riane turned and smiled, her black eyes like shadows in the night. Her nipples popped through the few strands of hair that fell across her full breasts. “No, you never did.”

Kiltarin closed his eyes and centered himself. “It’s a little tune my mother used to hum to me when I was little. It was something she learned from the man who raised her, and he had taken it from the convent of telepaths where my grandmother had lived. It’s a hymn of praise to Yuilan.”

“Yes.” With his hands still under the cloak, Kiltarin kept them pressed against his cock. If she saw it pop up... “She was once worshiped as a goddess, but no more. The order was disbanded.”

“It is a beautiful song.” Riane stood and moved over to where Kiltarin still lay. Her pussy exposed to him, Kiltarin could think of nothing save making his fast-fading dream a reality.

He drew in a long, calm breath. The bed. Soft. Softer than anything he had slept on out in the wilds. “Where did you get heather grass? Winter’s frost kills it.”

“I, too, thought that.” Riane knelt beside him and laid one hand on his chest. “But when I went to look for something – anything – to make you more comfortable, I found a large patch of it.”

Something else. Something to talk about. “And what about my clothes?” He nodded toward them. “Aren’t they dry?”

“Almost.” Riane’s gaze traveled down Kiltarin’s body, her hand trailing her inspection. “Are you still cold?” She touched the mound where his hands were covering his erection.

Riane’s hand wiggled in between his and freed his hard cock from its prison. The shaft sprang up, tenting the cloak. “Oh, Kiltarin. My love, why did you not tell me?” She tore the cloak away, and while she slowly stroked his penis, she moved around on her knees to position herself between his spread legs. She looked up at him through her eyelashes as she lowered her lips toward the bulging head.

“Wait, Riane.” Kiltarin raised himself up on one elbow and put his other hand on her shoulder. “This isn’t right. You’re not some sex slave who just relieves me every time I feel the urge.”

Riane shook her head. “What brings you pleasure pleases me.”

Kiltarin sat fully up and took her face in his hands. “Listen to me. I feel bad using you this way. It’s not right – just trust me on this. I can’t just take from you. I … want to give.” He kissed her lips. “But gods forbid I break my oath to Arathan.”

“There is no dishonor.” Riane fixed him with her black eyes. “I love you.”

“Truly?” He ran his fingers through her hair and pulled her into a tight embrace, crushing her cheek against his chest. “I’ve never loved anyone as much as I love you – loved you the moment I saw you, though I didn’t realize it until now.” Kiltarin was aware that her hand was still on his cock, still stroking it.

Each time I read Adonis Deverueux&#039;s books, which are set in the wondrous world of Gilalion, I always find myself lost in the beautiful details, sights, sounds and powerful emotions. I always feel that I am reading a Greek tragedy mixed with the complexities of Lord of the Rings and the various clans and lands as Game of Thrones. I have to honestly say that when I finished reading this book I was very moved and full of conflicting emotions ranging from joy, contentment and satisfied to pain, sorrow and dismay. Let this sway you in a positive way as the book stirred me with many strong emotions and left me feeling conflicted with how it ended. The ending was tied up, but not in a neat bow because I wanted a more in-depth explanation as to why one character in particular decided on their course of action. Riane and Kiltarin&#039;s story is a highly erotic one full of great passion, devotion, and loyalty, however, their relationship is put to the test several times in the story which brings with it instances of sorrow, despair and a future in question. I loved Riane and Kiltarin as a couple. When they explored together who Riane truly was and their discoveries lead them on a path that could tear them apart I was overwhelmed by Kiltarin&#039;s love for her. There were moments in the story when Kiltarin&#039;s rivals for Riane tried to pry her away from Kiltarin and I personally found it difficult to accept some of her reactions. Again this is just a testament of how well written the book is that it is able to draw such strong emotions from me. I highly recommend this book which could be read as a stand alone, but characters who have appeared in previous books are mentioned, which if you read first will provide you with a greater appreciation and understanding of the world and the characters. Be warned this a very hot, erotic book with M/F/M menage, anal sex/play, sex toys, and multiple partners which will result in the need for the reader to take multiple cold showers.

First of all, the bad news. I must confess that this is not my favourite of Adonis Devereux’s books I read so far. It’s not for any specific fault of the book; I just feel that the scope and intensity of the story needed more length to come into full bloom. The majesty of the plot deserved a more measured pace; the intricacy of the sex scene a more nuanced description; the dazzling richness of the world building could fill volumes on its own; and the conflicts and development of the characters (both considerable) could have been explored even more fully. My calculations is that the book is too short by at least a half. But, for all that, I could not be convinced to cut off a star from my rating. Just perhaps a little tip from a corner of the fifth star. The book still stands head, shoulders, nipples and navel above the crowd. It’ almost sacrilegious to list this under Romance. Romance happens (very much) but this is first and foremost a wonderful fantasy story, set in a world of flabbergasting complexity. Gilalion is so vast, so rich and so unique that really there is no point in trying to describe it. There is a handful of novels set in this universe already, and more to come, I am sure, so it’s not a place that can be summed up in a paragraph or so. There are human kingdoms and Ausir kingdoms (Ausir look like humans, except they are longer lived, and have horns, and are all in all hotter and smarter). There are wrathful, quarrelsome gods, trolls and giants. But not boring and bald like it sounds here. Grand, and majestic and surprising. Look, you got to go and read the books. The hero of the story here is Kiltarin, the Prince of the Larenai Ausirs, son of the God-king Kelvirith who appeared briefly in Bride for the God-king. Being the prince of a kingdom with an immortal king has its drawbacks: knowing he is not likely to ever inherit the throne, Kiltarin leaves his place at court to hunt Nohrs (let’s say trolls, but scarier) in the wilderness. In the wilderness he makes friends, here and there, like the Tamari Ausirs, an estranged Ausir population far in a barren icy country. Discovering the capital of this country, Icedeep, and its local customs and traditions is already enough to justify the price of the book. The heroine is an amazing, complex, mysterious, loving, lusty, dangerous, deeply dark woman named Riane. When the Tamari king, on his death-quest, finds her asleep under the ice of a frozen lake, and wakes her up, she has no memory of her identity, except that in her sleep ‘she heard the whispers of the world’. And if that is not awesome, I don’t know what is. Much of what happens in the book has to do with the mystery of who and what Riane is, and it is quite a ride to discover the truth. There are moments towards the end of the book when I thought, ‘Is this the same book I started the other day?’, such is the deep change that comes upon all the characters involved. It might easily have been a trilogy! Highly recommended.