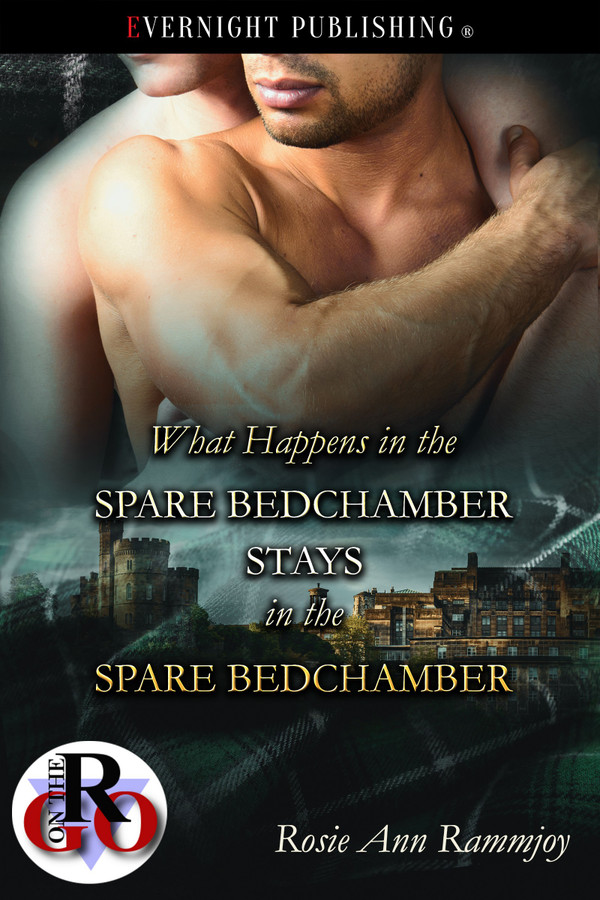 Highlander Donall is paying an overnight visit to some very bohemian friends at their Edinburgh residence, with his handsome-but-shy partner Benjamin. Open homosexuality may not yet be accepted in Scotland, but bohemian is as bohemian does—and Donall’s friends are famed for their open-mindedness.

But after dark (and after quite a few whiskies), Donall and Benjamin overhear something that gets them fiercely hot under their wing collars. Their reaction surprises everyone—especially themselves. Can Benjamin overcome his Victorian reserve and embrace what he truly desires?

“I could, um, knock on the wall…?” Donall suggested. At home, if the neighbor on the other side of their semi-detached house made too much noise practicing the piano late at night, they knocked the end of a broom handle against the wall to ask her to quieten down. “Or should I just march next door and ask what the blazes they think they’re doing?”

Benjamin shook his head, lips tight at even having to acknowledge the reality. “We cannot tell them what to do under their own roof. It’s abominably rude. It’s not our place.”

Donall glanced sideways under his eyelids, at Benjamin. The pages of his book trembled. He was shaking with tension. And the way he fidgeted, the half-distorted shape of the covers about his lap…

He isn’t embarrassed, Donall realized suddenly. He’s just as fired-up as I am!

Well, that was a shock!

What to do, what to do? Donall tried to think—with difficulty, near delirium with longing as he was. Reaching out in lust and grabbing was no use. This was Benjamin, after all. Having a raging seven-inch cockstand is no guarantee he actually wants to do anything with it, Donall thought dimly, practically on fire with frustration. Donall knew it from experience. It was astonishing, but up to a certain point Benjamin had the self-restraint of a monk.

Still, Donall was in no fit state to scheme or contrive. He gave up. He moistened his lips nervously and leaned toward Benjamin in a helpless, honest lust. Perhaps the right words and touches would simply come to him?

Benjamin eluded him, sliding abruptly out of bed. He muttered something about wanting a fresh glass of water and said he was off to the kitchen.

“Right,” Donall nodded, scarcely able to get the words out.

As Benjamin stood to wrap his dressing gown about himself, keeping his back turned, nobody would have been convinced at his trying to hide this substantial cockstand he didn’t quite know what to do with. He would be back in a minute.

Donall listened in a daze in his absence, eyes half-closed, trying to vicariously sense what was happening through the wall now.

Donall clenched his jaw, holding his breath as the moans went faint and stunned for a moment, as if Theo and Violet had taken each other’s breath away, as if something so privately delicious were being done between them they could scarcely put forth the energy to make a racket about it.

Donall’s hand pressed at the top of the bedclothes, trying to bring at least a little ease to his straining lap. Ah! The pressure felt so good! Even so, he took a deep breath and tried to calm himself. He dare not commit to actually frigging himself. In his wilder dreams, of course, Benjamin would walk back in and interrupt him at it, immediately join in. All would be glorious, sweated abandon … but those were dreams.

Soon, Benjamin returned, thick woolen dressing-gown layered pointedly over his front, sipping a tumbler of fresh water. It was, if anything, an even more embarrassing point to be eavesdropping. Theo sounded half out of his wits by now, wordless cries incoherent and punctuated by great heaving breaths, as he began to periodically hold his breath and build up to his peak.

Benjamin sat down heavily on the edge of the bed, dressing-gown-clad back turned away from Donall. He put the water aside on the bedside chair.

Donall registered the room around him only in the dimmest haze, as Theo’s cries built up and up. His whole body seemed to be coming out in sympathy. He loved these sounds.

Theo didn’t even sound ugly or ridiculous. There was almost a smile to his voice.

God, just listen to him! A sweet, incredulous delight colored his cries.Then, there was silence. He must’ve run out of breath.

After a few moments, on the edge of hearing, a sound resumed unexpectedly. A quiet murmuring, little sensual noises of satisfaction and connection. Mutterings, sighs, and words too low to make out. Theo and Violet were coming down off a high together. And yes, as Donall had half-suspected, there was Violet’s breathless laughter mixed into it too.

Does she always do that? Or are they laughing at us? Do they know what state they’ve put us in? Donall found, with the realization of a mixed blessing, that his pajamas wouldn’t have to be put aside for the laundry just yet, but the unbearable below-the-belt ache remained—and something must surely be done about it. Now what are they going to do? Is it Violet’s turn, or did I miss that part? Or are they going to start up again and make us deal with this insanity all night?

Benjamin couldn’t find the words, or didn’t know them, but Donall’s lower lip slackened slightly in surprise at his fumbled gesture. He was beckoning, a curled hand urging him closer.

wo men, one love and a lot of passion. This is the first story by Rosie Ann Rammjoy for me, but it won’t be the last. I enjoyed Donall and Benjamin’s tale. It’s very hot, yet sweet. I know that sounds odd, but go with me on this. These two men want each other. They’re together, but they haven’t gone to that level yet. It’s 1883 and it’s not okay to be gay, but being bohemian is another thing altogether. I liked that these guys are on a journey. Sure, it’s only over the course of a night, but it’s a sweet journey. The way they handle it is anything but sweet, and it’s exactly how it should go. Do I sound like I’m leaving out details? I am because I don’t want to spoil the story. If you’re looking for a story that’s a little offbeat and cute, but hot, then this is the one for you. Recommended.