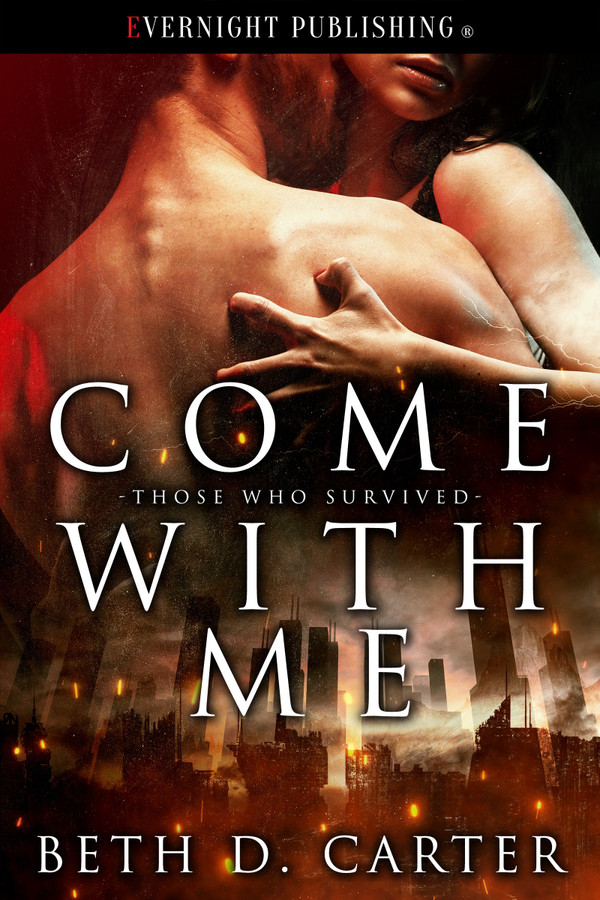 Lainey is one of the few who survived the virus that ravaged the human population. In order to remain safe, she stays away from people, preferring to live on her own. Not trusting anyone. Until one night she’s attacked and rescued by a stranger who insists that there’s still good in the world.

Nolan has a fantastical story of a new civilization in Canada, and urges her to go with him. Lainey doesn’t know if she believes him or not, but the unknown is enough to scare her away. Yet day after day he slowly breaks down her walls, opening her up to the possibility that she might be strong enough to take a chance not only on him, but herself as well.

“What we’re discussing, Lainey, is what the hell holds you here? I know what you want to do, but I don’t think that fence is going to give you the peace of mind you think it will because you’ll still be alone.”

“I’ve been alone my whole life!” She threw her hands in the air. “I can survive perfectly well without anyone else.”

“But you don’t have to,” he said softly. “Humans weren’t made as solitary creatures. We all crave company and comfort. Why else did you trust a stranger enough to bring me into your personal space?”

That brought her up short. “I…I didn’t. I mean I didn’t do that because I was lonely. I did that because you saved me. Because you agreed to help me.”

He leaned closer to her. “You asked what if this is our sanctuary. Ours. Which makes me think that, down deep, you do want a partner. You want to use the pronoun we properly.”

“I don’t…no, that was a slip of the tongue. I wouldn’t even know how to be a we.” She pointed between them. “It’s why I like books so much. They don’t ever let me down.”

She put her hands on her hips. “Why are you bringing this up?”

He hesitated for a moment. “Because maybe I’m tired of being alone myself.”

The admission shocked her. “You don’t seem like type of man to wax poetic.”

“I’m just being honest,” he said softly. “Nothing poetic about it. I traveled from Arizona to San Diego, and I saw the dead. Hundreds, maybe thousands of people whose lives were snuffed out instantly. The whole of their existence boiled down to where they were when the virus took hold, and I realized all the external bullshit people put themselves through meant absolutely nothing in the grand scheme of things. Unlike those other poor bastards out there, I got a second chance.”

“A wake-up call,” she murmured.

He nodded. “Yeah, you could say that. I don’t want to waste it, either.”

“So anyone will do?” she asked bitterly. “I just happened to be the first woman you found?”

Nolan stared at her for a moment before leaning closer, bringing his face so close she could feel his warm breath. Butterflies immediately erupted in her belly, sending shivers up her back and causing her breath to speed up. He gently wrapped a hand around the back of her neck, and their eyes locked.

“You are beautiful, resourceful, brave, and you turn me on,” he said. “Not just anyone. You, Lainey.”

Lainey was living a completely normal life – until a strange virus accidently released ended up killing a large percentage of the world. She never thought she’d be living post-apocalypse, but here she was a year after the infection started spreading, just trying to just survive another day. Even though Laniey had worked hard to keep herself safe eventually her luck ran out. By chance she met Nolan exactly when she needed a helping hand, but can Lainey learn to trust when the world has ended? While I can totally understand in the current climate readers might not be in the mood for an apocalyptic “strange virus kills a large percentage of the world” style of story, I just couldn’t help myself. I’ve enjoyed plague stories my whole life and even though I prefer this storyline in my fiction and not my real life – I couldn’t resist reading another plague-related story. I admit to being pleased the author in no way tried to make this based on Covid-19 – the plague started in a car accident in Atlanta (a CDC worker in the crash had samples of the virus that were released) and the symptoms were bleeding from the eyes, nose and mouth. So this helped solidify the story as fiction and not like anything going on currently in our reality. This definitely helped me enjoy the story more. I was really pleased that Lainey didn’t just fall over herself when she met Nolan. Even though he clearly was a good man and just wanted to help her, Lainey insisted on not lowering her guard, which I couldn’t blame her for. The world was a totally different place and it’d be stupid to just assume because someone did something nice they didn’t have any other motive. Admittedly this didn’t lend much of an air for romance, but I enjoyed watching Lainey and Nolan come to know each other and slowly develop feelings. It made the romance much slower paced, but it made their whole relationship a lot more believable and relatable. Readers who like plenty of conflict and action should really enjoy this story. I was pleased the plot moved in a logical and quick pace – Lainey and Nolan coming to a bargain where he’d help her build a decent and safe wall and then she’d get him a solar-panel ATV for transportation. I enjoyed watching their relationship deepen and the trust grow between them along with their romantic feelings. The story had a good overall pace and plenty of action. While the ending wasn’t a cliff-hanger this is absolutely part 1 of an ongoing story. This part of the arc was well resolved but readers who enjoy everything neatly wrapped up might feel mingled emotions in that the next stage forward is clearly set up but readers will have to wait for the following installment. With good characters, a totally believable story line (even though it’s the end of the world) and a fast-moving pace this was a great story I really enjoyed.

Loved this read. Plenty packed into this story and I&#039;m eager for more!

Recover Me by Beth D. Carter

Believe in Me by Beth D. Carter