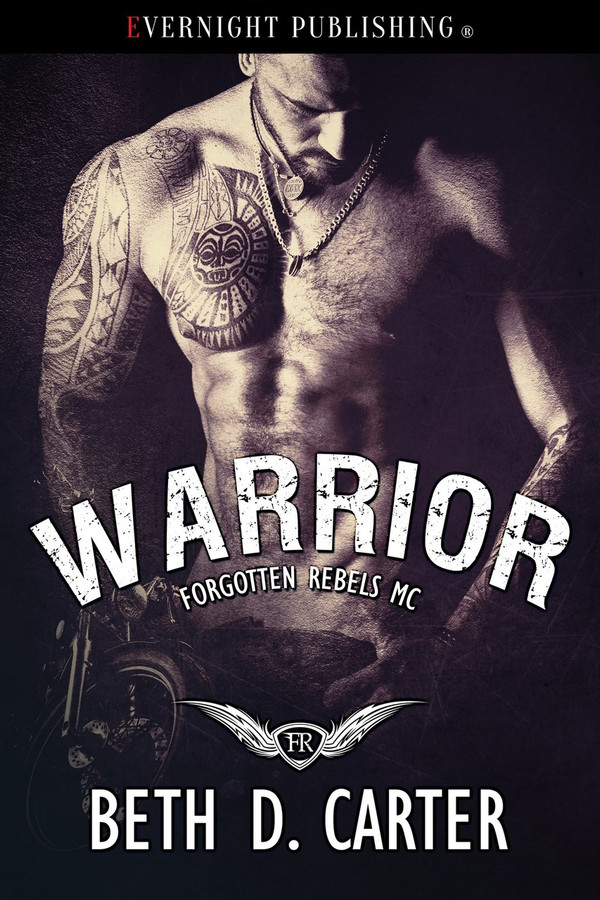 Although Church is a twin, she’s always felt isolated from her sister, Cherry. Taking over the mechanic garage across the street from The Forgotten Rebels MC ensures that she’s never alone, even though her haunted past makes it difficult for her to trust another person.

Darrell McBryde lost his leg on active duty, changing not only his life but his mind on the club's drug running business. Taking a stance against it, however, has put him at odds with the other members. In a world he once knew, suddenly he’s a stranger.

Both outcasts, Church and Darrell forge a tight friendship, one that eventually shifts into something deeper. But just as she’s about to reach out to take a chance, tragedy strikes, testing Church’s faith that love and happiness are hers for the taking.

He couldn’t run or hide, all he knew was he’d spend his last breath defending Church. And if the enemy came at them, he’d be the first one to end her life in a last-ditch effort to spare her the agony and humiliation that the fucking insurgents would inflict.

He tightened his hold.

“Darrell! It’s okay! We’re safe. We are both safe. Please, come back to me, Darrell. Open your eyes.”

Slowly, her words penetrated through the blackened upheaval his mind had trapped him in, the fog hesitantly lifting. He blinked until her face came into focus, as the desert faded from the peripheral of his vision. Her concerned blue eyes became the center point of his world.

He took a deep breath and eased the death-grip he had on her arms. It was only then that he realized he lay half on her, and that he squished her body into the corner of the driver’s seat.

“Jesus,” he muttered, immediately letting go. He pushed back, horrified to see red marks on her arms where he’d held her. “I … I … oh, fuck. I’m so sorry.”

She shook her head. “Nothing to be sorry about. You were protecting me, weren’t you? From the enemies.”

Jerkily, he nodded his head and ran a hand over his face. He shook, not from fear, but from the nightmare that still lingered in his mind.

He looked out the window and saw they were on the shoulder of Highway Sixty. “Tires don’t blow without a reason.”

“They do when they’re threadbare,” she said dryly. “I knew they were on their last leg, so that combined with the heat and me hitting a large rock, well, all I can say is sorry.”

“Don’t,” he said. His emotions were too fucked-up for him to think clearly. “You don’t have to apologize. Church, you know I’d never hurt you. Right?”

“You didn’t hurt me, Darrell. I get the difference. Believe me, I do know how to tell between the two.”

He cradled his head with his hands and slumped over. He hadn’t had such a reaction this strong in quite a while. In fact, he thought he’d moved past the fear of loud noises. His shrink had certainly thought so. What the hell was he supposed to do now?

“It’s okay, Darrell,” she said softly, placing a hand on his shoulder. “I’ve got your back, too.”

He took the moment to not only get a grip on his erratic thoughts and heartbeat but to savor Church’s brand of comfort. Her touching him was a big deal, and he knew that. He may not know the reason why she shunned the touch of another, but at the moment, he didn’t care. The place where her hand rested caused a bolt of lightning to shoot straight to his groin, proving that his dick definitely wasn’t broken. He’d always had a reaction to her nearness, but he had never anticipated such a visceral response. He shifted, uncomfortable with the thought that he couldn’t keep his cock under control, and unfortunately his shifting caused her hand to lower away from his shoulder.

Not having read any other books in this series made no difference, as this story drew me in right from the start, and there was enough information on the other characters to make me feel immersed in their world. Loved Church, the heroine, her combination of toughness and vulnerability. Her connection to Darrell and the love that blossomed was touching, steamy, and perfect. Great plot. Love this author&#039;s work!