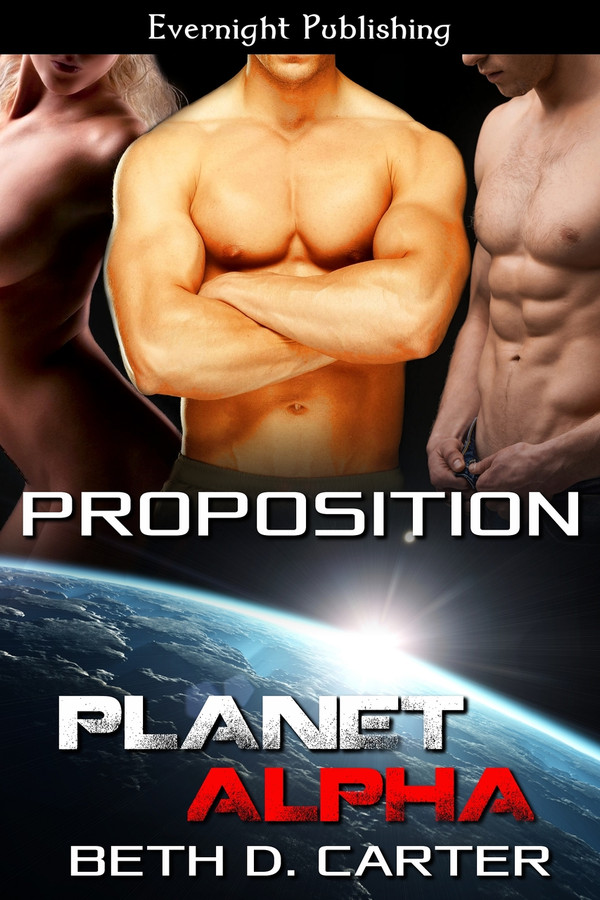 Geoffrey DeWinter and his wife Keirah live on a dying Earth. The only refuge is an alien world that needs human women as mates, only Keirah refuses to leave her husband to save herself. Geoff decides to bring them to an auction house that takes married couples, accepting that he will have to share her with another.

Their shuttle is attacked by Xyran raiders looking for women and it's Keirah who defends them. When Captain Krig sees Keirah looking like an angel come to life, he wants her. The Alphan warrior wants her enough to accept her husband, thinking he will deal with Geoff in some way or another. But when a vengeful Xyran comes after Keirah they have to take refuge on a wilderness moon, forcing them to work together to survive. Is their love for Keirah enough to turn them into a family?

He was big and muscular, and the moment their eyes met something zinged through her body. His horns sat high on his forehead and curled back toward his skull, the tips disappearing into his thick black hair. His blaster was held in his hand but down by his side, and she saw his golden eyes widen slightly as they took in her protective stance. The Alphan man looked first at her and then at the dead Xyran male at her feet.

“You killed him?” he asked in English, his words lightly accented. Goose bumps dusted across her skin as his deep, sensual voice washed over her.

Keirah lifted her chin. “I’d kill any man who meant to hurt me. Or Geoff.”

Again, the Alphan glanced around, lingering a moment on Geoff and the other unconscious men before looking at the women behind her.

“You must have taken him by surprise.”

“Have you ever killed a Xyran before?”

“No.” In fact, it almost made her feel sick how easy it was, but she wouldn’t show that weakness in front of him.

He nodded. “What are you doing on this ship?”

“It’s an auction ship,” she said. “There are some buyers willing to pay for a husband and wife.”

One of his eyebrows went up. He pointed to Geoff. “That’s your husband?”

His brow furrowed. “My name is Captain Krig. Commander Jorg sent out a distress call as soon as the Xyrans attacked, and we were on patrol, which is why we got here so quickly. You can put the blaster down now.”

She took a deep breath and slowly lowered the weapon.

“What is your name?”

Her eyes narrowed. He almost made that sound like it was a bad trait. At that moment, several more Alphan men walked up behind him, and Captain Krig conversed with them in his own language. She’d never had a reason to learn it, so she didn’t know what he was saying, but the next moment they were coming in the room and helping the unconscious men, including Geoff.

“Where are you taking him?” she demanded.

“The men will be taken to the medical bay on my ship,” he told her. “I would like for you to follow me.”

Did she have to? She wanted to follow Geoff. But the look on his face told her that he hadn’t requested her presence. He demanded it.

She tried to push down some primal instinct that warned her this man would change her world forever.

I received this book for free in exchange for an honest review. This does not affect my opinion of the book or the content of my review. When I read the blurb for Proposition by Beth D. Carter, my curiosity was piqued. After all, it’s not typical for a ménage romance to begin with a happily married couple who then add a third. I wondered how Ms. Carter was going to make this trio work and would I find it believable. Fortunately for me, Ms. Carter did an amazing job and I not only bought these characters as a triad, but found myself cheering for them to find their happy ending. Geoff and Keirah are happily married but Earth is dying and Geoff resorts to desperate measures to ensure his wife’s safety. He has found an alien world that seeks out human mates for breeding and an auction house that will accept married couples so the two can still stay together. After their shuttle is attacked, Keirah comes to the attention of Captain Krig who is instantly attracted to her. Krig wants Keirah as his mate and is willing to accept Geoff for now. Everything changes when they are attacked by an alien bent on revenge and the two men have to work together to ensure Keirah’s safety. Since cheating spouses is a definite turn off for me, I was worried if I would be able to accept Keirah being with another man. Turns out I shouldn’t have worried because Ms. Carter did an admirable job in allaying my fears. By having Geoff and Keirah discuss their own thoughts and feelings about the situation, I was able to look at the relationship between Krig and Keirah with acceptance. In fact, their discussions mirrored my internal struggle with the concept so perfectly that it was almost as if Ms. Carter could read my mind. The story is full of emotion and I felt for each of the characters. I understood Geoff’s sacrifice for his wife, Keirah’s struggle between her love for her husband and her attraction with Krig, and Krig’s own desires for Keirah. The connection between the three was scorching and I completely bought into the idea that this relationship could work. I appreciated the fact that Ms. Carter gave enough attention to the relationship between the two men to help me accept that they could put their jealousy aside and work together to ensure Keirah’s happiness. Proposition is the third book in the Planet Alpha series. Proposition can be read as a standalone without any confusion but I would still recommend reading the other books in the series if for no other reason than they are entertaining and fun. I have read several of the books and enjoyed them all. I can’t wait to see what the future holds for this exciting series.

Another enjoyable story in the Planet Alpha series. A young married couple hope to be auctioned off to an Alphan and the wife will bear this alien&#039;s children, ensuring they are safe and still together. Unfortunately, like in all good stories, this plan isn&#039;t going to happen, or at least not smoothly. If you are a fan of the series, you will enjoy this.

Fast-paced and unique, I found the book to be refreshing in comparison to all the other typical sci-fi romance books out there. Besides the fascinating plot with an auction house that takes married couples, the book is very well-written, has interesting characters, great sex and emotions running high everywhere. If you&#039;re looking for a quick, enjoyable read with a sci-fi theme in it, this is the book for you. Overall, highly recommended.

Another enjoyable story in the Planet Alpha series. A young married couple hope to be auctioned off to an Alphan and the wife will bear this alien&#039;s children, ensuring they are safe and still together. Unfortunately, like in all good stories, this plan isn&#039;t going to happen, or at least not smoothly. If you are a fan of the series, you will enjoy this.

Love this series. Actually, I think this is the book I like most in the series. It tells of how far a person would go to keep the love of their lives safe and alive, the sacrifices that they do. Heartwarming and sweet

From the first book in the series, I have loved every moment. This third book just reaffirms my love for the series as well as the Science Fiction Genre. Even though its the third book in the series, I don’t see why it can’t be read as a stand alone. None of the other characters are directly involved in either of the other books. Proposition is a short read, with just enough detail to make the story flow. I loved all three characters. Geof is a strong character. He helped Keirah when they were young and made it his sole purpose to make sure she would be safe. I’m not sure if he thought everything through. Earth is dying and Keirah’s husband has made plans to get them off the planet. How? The plans are to Auction themselves off as a couple to an Alphan warrior. The Alpheans are short on women and some will take a couple just to have the wife. Knowing what he had to do to keep both him and his wife safe didn’t make it any easier to do. Imagine being sold to the highest bidder in order to help repopulate a alien world. As short as the story is, you can still feel the emotions run wild. Keirah a loyal wife that is to be a mate to a man she’s never met. Geoffrey fights with his status. How will he fit in? Better yet, will he fit in? Krig wanted a mate. Now he has one and also her husband! What is he going to do with him? Just to mix it up, the writer throws in a bit of danger. Nice. There was a few scenes that had me fanning my face. The author didn’t push the male-male interaction other than a bit of touching. I really like the series and the style of the writers. I think there are two different writers in this series. That was very intriguing and they both made it work. I look forward to reading the rest in the series.

I really enjoyed this book. There are a few twist and turns but I loved that ultimately Krig, Keirah and Geoff get an even happier ending than they all could have imagined. I definitely enjoyed the heat between Krig and Keirah and I liked that Ms. Carter doesn’t make this an easy thing for the three of them to work out, but actually makes them work a bit for the happiness they’re all looking for. This book is part of the Planet Alpha series but can totally be read as a stand alone story.

This was an unusual story, but I liked it. The three-way relationship was hard work, but eventually it came together, giving them all, the family they were each wanting and needing, but hadn&#039;t thought possible. I liked this writer&#039;s style.

Great quick read with very good characters and the interaction between characters was fantastic. I like this series so far. I will be reading more. I would recommend this book.

Proposition, book 3 of the Planet Alpha series. Another great addition to the series. I had my doubts about a human male in mix, but it worked. A great steamy, fun fast read. Hope to see more of the series. Maybe a Alpha and Zyron bond mates. This is the first book I have read by this author and will be checking out other titles by her.

I quite enjoyed this story. It is different from the other two Planet Alpha books, but just as good. I was curious to see how an Earth man stacked up against the alien warrior and I was happy to see he held his own. And it didn&#039;t hurt that they were both smokin hot. I definitely recommend this book and say keep em coming. I really like these Planet Alpha books. Enjoy!