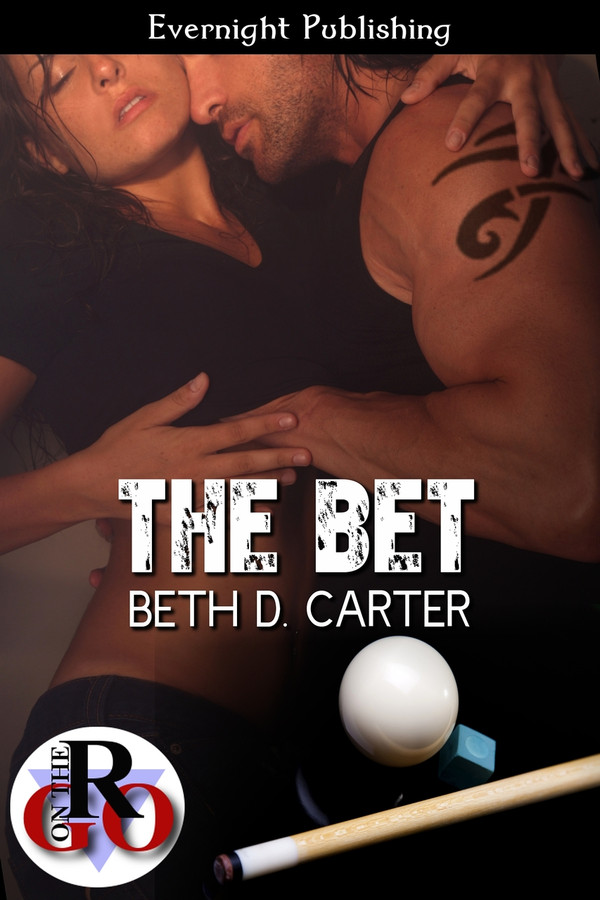 Ember has not had an easy life.  She takes care of her alcoholic mother by holding down two jobs and rarely has time for anything else.  When a rich young man asks her on a date she happily says yes to a free meal.  However, instead of dinner, she becomes the bet in a game of pool.

Saber is the hustler who just won her, but instead of feeling threatened, she feels attracted to the obvious bad boy in leathers and tattoos.  As the night wears on she falls more and more under his spell until they can’t keep their hands off each other.  But Saber’s hustled one too many people and now Ember’s date wants his money back…one way or another.

He smiled, his lips curling on the ends to give him that devil look.  “Is that really your name?”

Something deep inside her flared to life, and before she realized what she was saying, her answer came out a bit flirty.  “It’s what I go by.”

He laughed and linked their fingers together.  Heat traveled from their touch, up her arm, to infuse her whole body.  Holy moly. Just touching the man made her panties wet.  Who the hell was this man that he could turn her on by just a look or touch?  Lust rolled through her, and she saw the answering need in his gaze.

“I knew it’d be like this,” he whispered.  “The first moment I laid eyes on you, I knew we’d be explosive.”

“You hustled him for money—”

“I hustled him for you,” he corrected.

“Hustle poor little rich boys?  Yes.  And I’m damn good at it.  But I’ve never wanted anything or anyone as bad as I wanted you.”

Ember is looking for something more from life that what she sees now. Working two jobs and watching her alcoholic mom waste away isn&#039;t the way she saw her life going when she was a little girl. When one of the richest guys in town asks her out she couldn&#039;t be happier, at least until she sees him for what he really is. But as luck would have it, she just might have met someone who can take her away from everything that she has now if only she is willing to take a risk on a stranger. Saber wasn&#039;t looking for anything more than some quick cash at that bar, until Ember walks in. Then she is all that he can think about, he just has to have her. The pull she has on him is enough that he knows he&#039;d regret it if he doesn’t at least take her home for a night. Funny thing is, when you get the girl away from the monster, you may just realize that you are the knight in shining armor that she has always wanted. Things are about to look up for Saber, if only he can convince Ember to take a chance and leap into his open arms. While I have read several other stories by Carter, this one was a little too fast paced for me. I really wanted to like these characters, but with the story being so short, even more so than a novella, it was hard to connect with the characters on any level more than sexual. The sex was great in this book, and definitely left me wanting more of that. The two main characters had great chemistry, but there wasn&#039;t too much build up to the main event, so it didn&#039;t flow well with the way I imagined these characters would have &quot;acted&quot; in a more full length book. I do hope these characters come back into other works by Carter, as their chemistry was steaming up my reader, and hopefully we get a bit more story with the sex.