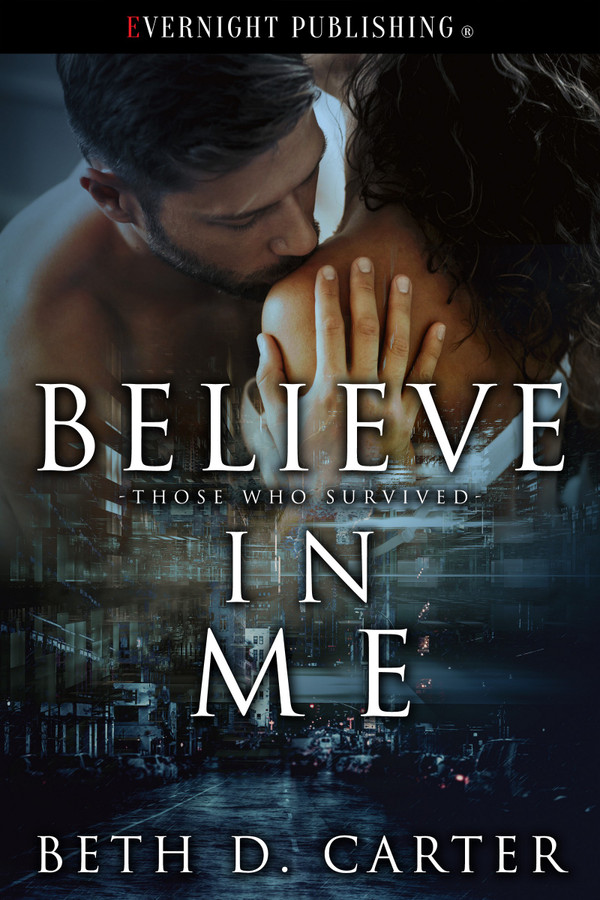 The world has been devastated by a virus, leaving only the strong to survive…

All of her life, Kerigan LaRoux has had visions of the immediate future. Her dreams are of one man, Hyde Galloway, and a vision that draws her to San Francisco. She finds him wounded, in the middle of a gang war. She hides him and treats his wound.

Although he is suspicious of her, he tells her he’s trying to catch a boat to Canada where the world is starting over. Much to his annoyance, she tags along. At first he doesn’t believe in her visions but little by little she wins him over.

They race against time, trying to save a colony of survivors from the gangs who want slaves. But can Kerigan save the man she loves, the innocent lives waiting for salvation, as well as herself?

“Are you going to ignore me forever?”

That managed to at least get an interested glance. “Who’s them?”

She smiled at him, delivering what she knew to be her alluring femininity. Hyde blinked, and his gaze lingered on her lips, letting Kerigan know he wasn’t immune to her charms. But the look in his eyes revealed a darkness that made her breath catch. Something had hurt this man. Something had scarred him. Compassion filled her, and she wanted so much to take him into her arms and banish all his demons. But she knew he wouldn’t let her, at least, not yet.

“Not me. I grew up in a small town in Louisiana. Related to about ninety percent of the population. I had cousins, and more cousins, lots and lots of them. I even think my parents were cousins three or four times removed.”

He frowned. “I can’t even imagine having that much family.”

“Sometimes it sucked,” she admitted. “I went to prom with my cousin Ritchie. I mean it wasn’t one of those weird incest things. Ew and ick. We simply were good friends who happened to be related. It made it nice knowing I had so many people watching over me.”

“What happened to them?” he asked, although it sounded a bit reluctant. Like he didn’t want to know, but then again, he did. “With the virus, I mean.”

“Most of them died,” she replied softly. “They had the wrong blood.”

He nodded, understanding immediately. Only people with positive blood had contracted the virus. Some type of viral infection had killed an enzyme on the blood cell, which, in turn, killed the person. She’d been one of the lucky ones who had a negative Rhesus factor.

“Me too. They were good people. Down-home, maybe, but devoted and loving.”

“Listen, about the boat…It might not exist,” he admitted. “I heard about it and decided to follow the rumor.”

“Okay. We’ll search for it, and if it’s not there, then we’ll head to Canada ourselves.”

She bit her lip, not wanting to say the wrong thing and have him return to the cold-shoulder treatment. “Has to be better than this place, right? I’ve traveled half the country, and everything is … fucked.”

A smile played at the corners of his mouth. “An apt description.”

He suddenly shifted closer to her, bringing his big body into her space. Butterflies erupted in her belly, sending jolts of awareness shooting through her. Her axis tilted off course as she looked up into his gaze, because, as tall as she was, he stood a good five or six inches taller. She wet her dry lips with her tongue, and his focus redirected to her mouth. Fantasies of them kissing played through her mind, and she couldn’t help but lean even closer to him.

Recover Me by Beth D. Carter

Come With Me by Beth D. Carter