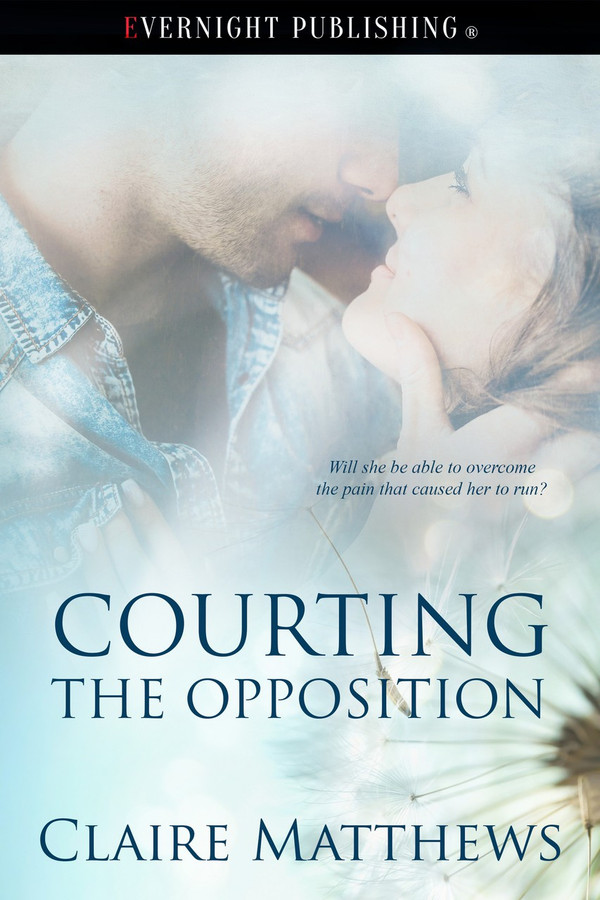 Julia Hyatt’s back in Austin, Texas, ready to start her own law practice and reconnect with her family after a three-year absence.  Liam Davis never forgot the beautiful girl from his Contracts course who disappeared without a trace. After filing her memory in the "one-that-got-away" category, he's in for a shock—not only is Julia back in town, she’s inadvertently stolen his most important client out from under his nose!

As they battle over the best way to help a young man who's been traumatized by an overzealous prison system, Liam and Julia begin to reconnect—both physically and emotionally—in a way that thrills Liam, but threatens Julia's wounded heart. Will she be able to overcome the pain that caused her to run, and open herself to the possibility of love?

The drive to his house seemed interminable, and they made it in almost complete silence. Julia stared out the window, her expression unreadable. Liam was on fire with anticipation and need, and as he took the turn into his driveway, he bounced over the curb.

“Sorry,” he muttered, shutting off the car. When he looked over, Julia’s head was bowed, and she was picking at the threads on the skirt of her dress.

“Are you okay?” He reached out and touched her shoulder with the tip of his finger.

“Yes,” she said, talking to her lap. “But I think…” She stopped. “I think I need to explain some things about law school.” She looked up at him now. “I owe you an explanation. About Scalise.”

“It doesn’t matter.” He leaned over and touched his lips to her shoulder, tracing the path of his finger. “You’re so beautiful,” he murmured, kissing her lips, and then raising up to kiss each eyelid.

“Come on,” he said, reaching down to squeeze her hand. “I want to show you something.”

When they came to his front door, he dropped a kiss on top of her head and pulled out his keys. Walking into the dark entryway, he grabbed her hand and led her to the back of the living area, where a large slider led to the back porch. Stepping out, he waited for her reaction.

“Oh my God, Liam,” she breathed, leaning forward over the deck railing and breaking into a huge smile. “This is incredible.”

“Yep. Pretty much the only reason I bought this house,” he said, embracing her from behind. Her back felt cool and delicate against his heated chest.

“You can see all the way downtown.”

Liam dropped his head and kissed the back of her neck, tracing his lips across her skin, ending at her earlobe. His hand rose to remove the clip in her hair, and it came tumbling down in a dark wave. He turned her body around slowly, and then they were kissing, his tongue sliding feverishly against hers.

“I can’t believe we’re doing this,” she whispered, breaking their lips apart.

“What, are you surprised?” He grabbed a piece of her hair and rubbed it between his thumb and index finger. “I thought it was so obvious.”

“The gigantic crush I have on you. That I’ve always had on you.”

This time it was Julia who moved in and kissed him, and when he put his hand on the back of her head and deepened it, she shuddered. Moving lower, he kissed her neck and reached behind to slowly unzip the back of her dress.

Slow down, he told himself, but he was aching for her. Soon they were stumbling back inside, and she was yanking his shirt out of his pants, and he was cupping her breasts, practically panting with lust. He pulled her flush against him, needing her closer.

“Whoa,” she said after a dizzying moment, and he backed off immediately.

“I’m sorry. I’ve just been waiting so long to do this,” he admitted.

She slid her hands around his neck and brought him close again. “No, I’m just a little … rusty. Needed a breather. I’m okay now. Proceed.”

He grinned and kissed her forehead. “Sit,” he ordered, taking her by the shoulders and backing her up to his tan leather couch. She obeyed wordlessly, her dress still gaping in the back.

“We’re going to take it down a notch, even if it kills me,” he whispered. “I want this to last.”

He leaned back on the couch and pulled her on top of him, allowing her to set the pace as he plucked sweet kisses from her lips, one palm on the side of her neck, the other on her slim waist. He could feel her heartbeat thrumming under his fingertips, fast and tight. When her hand slipped under his untucked shirttails and slid up his chest, he sucked in a shaky stream of air.

“Liam,” she breathed, straddling his waist and pushing her hips firmly into his, and he decided the whole “going slow” protocol might suffer from a few crucial flaws.