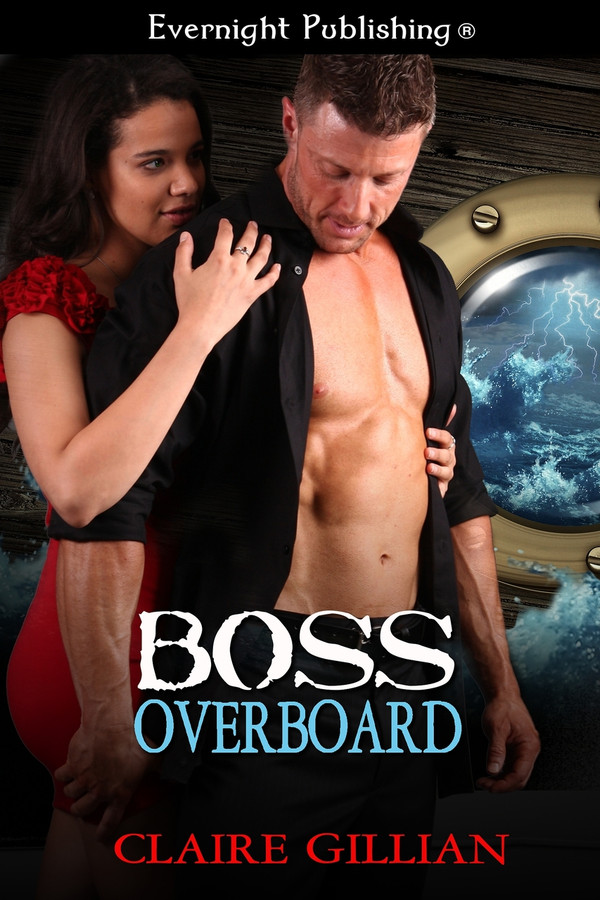 An all expenses paid, trans-Atlantic cruise has romance written all over it…unless you’re the poor sap who has to inspect the toilets and time the cafeteria lines. As if secret-shopping her company's failing cruise ship isn't bad enough, Lydia Johnson is forced to bring along a "top talent" new hire as her assistant. With a heart barely healed from her ex-fiancé’s deceit, she's in no mood to train a man who might cheat her out of an overdue promotion.

Paul Thomas may be new to J.P. Theriot Enterprises, but he certainly knows his way around cruise ships. The Cajun charmer also isn't shy about pursuing his desires, including his wary, but oh-so-sexy-when-she lets-her-hair-down manager. He's shared more about himself with Lydia than any other woman…except who he really is—J.P. Theriot.

Clouds littered the sky blotting out the upper third of the moon, but the ocean was finally calm—a deception because she knew the moon and sea to be capable of great mischief when in cahoots.

"Well, that was fun," she remarked at last, breaking the silence.

Paul chuckled, a warm rumble that emanated from deep in his chest. She drank in his dark form at the rail. He was tall and powerfully built, like a dastardly pirate at the helm of his ship. All he needed was an eye patch, and maybe open a few top buttons of his shirt. A puffy shirt would be better still, but she doubted the gift shop sold any of those.

He caught her watching him and smiled in the dim light. Damn she never got away with peeping at him. Totally unfair.

"I used to love to go sailing with my father," he said leaning his forearms against the railing. "We'd mostly sail in the Gulf of Mexico but once we towed the boat to Florida and sailed in the Keys."

"That sounds nice. We never had enough disposable income for anything like a sailboat."

Paul snorted. "We didn't either. My father won it in a poker game. We kept it for less than a year before he lost it the same way. Comme ci, comme ça."

"Huh. All this time I thought you came from money." She tore her gaze from his and directed it toward the ocean.

"Why would you think that? I told you I was a swamp hick."

"You said you didn't want to be mistaken for one. You wear nice clothes for a new hire. You know your wines. You know your way around a cruise ship and how it runs, or is supposed to anyway." She shrugged. "Seemed a natural conclusion."

"I'll admit I've had some luck since my younger days. I did inherit a few talents from my father." He gave her a wicked, hooded glance. "I know my way around a poker table and a pool hall and I've been lucky with a few financial investments. But all that came later in my life. I didn't grow up with it."

"What? Are you some kind of hustler from the Big Easy?" She intended to tease him, but the wide-eyed, almost apologetic glint in his eye confirmed her guess.

"Used to be," he said softly, redirecting his attention to the water. "What about you? How'd you go from humble beginnings to college grad to best in your field at Mardi Gras Escapes?"

She tossed her head. "Eh, nothing as sexy as winning a poker game, I assure you. I worked hard and won a scholarship. That's all." After the word sexy left her mouth, she almost wished she had chosen a different one. The lazy smile that stole across his face while in profile to her was worth the momentary awkwardness though.

"Mais nothin’s wrong with hard work," he drawled in typical Cajun fashion. She shrugged, and after a few more moments of silence, he asked, "You leave a beau behind in Nawlins?"

"A beau?" She snorted. "No, no boyfriend or fiancé." Under her breath she added, "Not since the ex and not anytime soon."

"Yeah," she said on a world-weary sigh she hoped would do the job of words better left unspoken.

"Exactly." He offered a similar melancholy sigh, the sigh of man disappointed yet still hopeful.

The unspoken bits of his one word confession played out in her head. Had he been engaged and discovered his fiancée in bed with another man? No, that was her story. He probably went for clingy types, ones who installed fuzzy toilet seat covers in his home without asking. Maybe he only liked super-models who took up all the counter space with creams and cosmetics, had five-hour spa appointments and demanded the limelight. Perhaps the ex- future Mrs. Thomas pressured him to get married with a little too much vigor. But if they had been together a while, he should have expected she would develop ideas in that department. Maybe his ex had an independent streak that made him feel unneeded. Maybe she refused to always do what he wanted to do—go to his favorite restaurants and movies, plan dates around his football-watching schedule, have an open-relationship on his end, totally monogamous on hers. Gah! Even her wool-gathering eventually spun around to her own waste of time named Colin. Thank goodness he was in her past and no longer on her horizon.

She pointed up at the moon. "Looks like the clouds are finally moving on."

"Beats a red sky." She gave him a sidelong smirk and he gratified her with a snicker.

Paul really could be a handsome pirate, puffy shirt or not. Maybe he'd kidnap her and drag her to his cabin. After he'd ravished her, again and again, the scoundrel, she'd slowly worm her way into his dark, twisted pirate heart and he into hers. If Colin showed up, he and Paul would have a sword fight over her, because of course Colin would realize what a treasure he'd tossed away after it had been stolen by another.

Her fantasies usually ended with disclaimers. God ... why couldn't she be more confident and successful in love?

They stood silently at the railing, side-by-side for at least ten minutes. When their arms brushed, Lydia realized she'd been slowly inching closer and leaning toward him. She shivered and clutched her shawl tighter. He didn't step aside and neither did she. Nor did she pull away when he slid an arm around her waist drawing her against his warmth. She didn't stop him when he gazed down into her eyes or when he raised a hand to her cheek, his little finger tucked under her jawbone. She also didn't stop him when he lowered his lips to hers and kissed her in the moonbeams dancing over them and the sea.

Interlaced with humor and wit, this easy flowing novel was a treat to read. Lydia is startled to find out she will be going undercover for the cruise ship on a secret shopper project, since that project had been already been aborted by the company. However with customer satisfaction of the cruise ship declining, the parent company, in particular it&#039;s owner, J.P. Theriot, wants some answers, and he wants the best, which means Lydia. When Lydia&#039;s boss and mentor, Ed, tells her about it, she is deeply suspicious of the reasons behind this, especially since she is expected to babysit a trainee. J.P. Theriot is posing as Paul Thomas, the trainee. Who better to get to the bottom of the problems than the boss? When Lydia and Paul get together sparks fly. Paul has some trouble taking instructions and criticism from by-the-book Lydia, but he is used to being the boss after all. The longer they&#039;re on board, the more their attraction heats up. Too bad the company rules forbid any romance between them. Lydia gives it a good fight, but eventually their passion wins out, until Lydia&#039;s suspicions seem to be coming true. With humorous situations interspersed throughout and the passion between Lydia and Paul heating up into nova range, I thoroughly enjoyed reading Boss Overboard. It was pretty interesting to see the inside of the ship from the secret shopper perspective, as well. This was my first time reading something written by Claire Gillian, but it definitely won&#039;t be my last.

Courting the Opposition by Claire Matthews