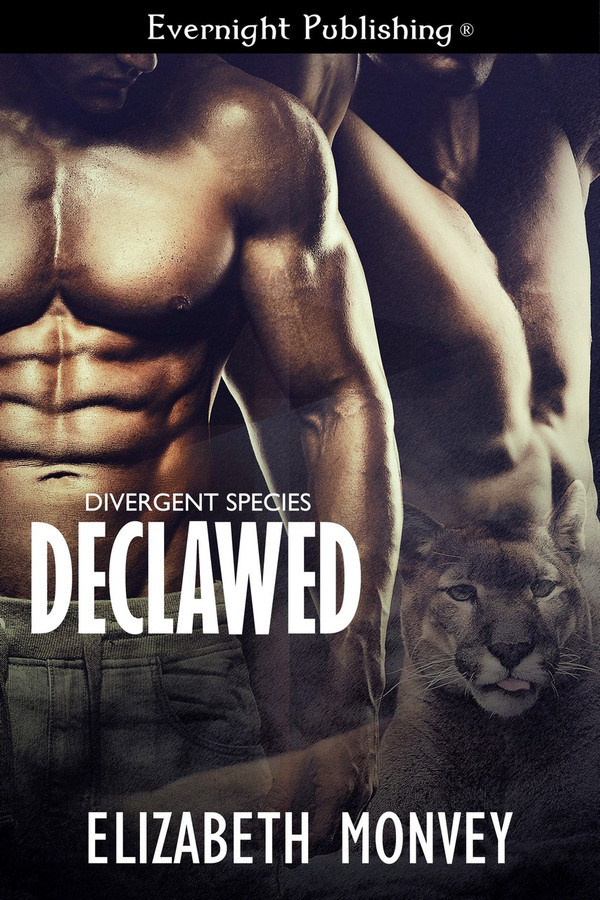 When Logan hurt the scientist who captured him, she had his claws ripped out as punishment.  He’s rescued, along with two others, by Shawn, the man he knows is his true mate.  Scared and ashamed, he runs from Shawn, knowing he could never be an equal.

Shawn is an Enforcer and follows after Logan when he leaves, knowing his mate is unable to defend or feed himself.  It’s not out of pity,  but out of love. In order to fight Logan’s demons, however, he has to teach Logan that love heals, it doesn’t destroy.

But everything changes when Logan finds out he’s expecting a child, engineered from the very scientist who took away his claws.

Logan held up his hand, showing the ugly stumps where his nails used to be. “And how do you propose I do that? You’d be better off finding someone who isn’t worthless.”

Shawn growled low in his throat, and in the next instant, Logan found himself hauled up by his lapels. He stared into Shawn’s deep brown eyes, saw the anger. Instead of being afraid of him, though, butterflies erupted in Logan’s belly and his dick hardened behind his zipper. He couldn’t help but glance down at Shawn’s lips, and he had the almost overwhelming urge to bend his head and kiss them.

“You’re not worthless,” Shawn snapped. He shook Logan a little, just enough to snap him out of the sexual haze that had ensnared him. Logan tried to pull away, but Shawn just tightened his grip. “I know you don’t believe me. I know you think that bitch fucked you up beyond repair. But you are so much more than just your claws, Logan.”

And the next second, Shawn’s mouth had covered his.

At first Logan was too shocked to do much more than lay limp and unresponsive. It was not a gentle, romantic kiss as their teeth smashed together under the demanding pressure. Shawn’s tongue forced open his mouth, to dominate him in ways that he never thought he’d like. All coherent thought fled as his body went up in flames, and Logan wrapped his arms around Shawn’s waist in an effort to get closer. The bigger, older cougar growled again, only this time it was one filled with raw desire, and it called to something deep within his own body. A scent filled his nostrils. Deep. Woodsy. An aphrodisiac to his senses. It went straight to the pleasure senses in his brain and made his cock rock hard.

When they parted, breathing hard and heavy, they stared into one another’s eyes. It was then that Logan realized Shawn must be feeling something similar because his dark eyes were dilated. His body was tense. Straining. His chest heaved as if he’d just run a marathon.

“You felt that,” Shawn stated. “You smelled it, I know you did.”

Awesome and touching read! I think it was even better than the first book. Loved Shawn and how he cares for Logan. How he tries to comfort him even when the little cougar still fights his feelings. It also seems more realistic at some point when Logan has to struggle with his future to be... Can&#039;t wait to read on in this series!

Wonderful blurb to complement the cover. The beginning of the story was amazing and a nail biting experience for me. The scene where he is captured by an evil scientist and hunters was almost breath taking and what the scientist does in retaliation of Logan’s survival need to run away is nothing less than eye tearing… I just wish we saw how he was rescued, adding to the drama of his capture. Shawn the enforcer is the ideal mate for Logan. He is just wonderful, caring and patient. Their intimate scenes are very touching by ‘showing’ their feelings along with the act of love. Near the end it felt a little rushed for me which was somewhat disappointing because there was a lot to expand in order to do justice for Logan’s story. Yes, I wanted to read a little bit more about the suspense part of the story. I shall purchase the next part in the series because I am hoping that the writer will explain more about the demise of the scientist and maybe elucidate on how Logan was rescued. Elizabeth Monvey added some interesting concepts into her story, leaving me hungry to read more… Yes, she has me in her list of followers now.

Book Review A disabled shifter is a rare thing – usually they have accelerated healing powers, so short of a whole limb being amputated, nothing much interferes with them being healthy. Not so in this story. Logan is one of the three prisoners of the mad scientist introduced in book one of the series, a cougar to be precise. The scientist - who was killed at the end of the first volume – decided to declaw Logan as punishment for scratching her in his cat form. That wasn’t the only cruel thing she did to him, but it is the most tangible “leftover” now that Logan is free. Dealing with his disability, his past, and the council enforcer, Shawn, who keeps following him, makes for a heart-wrenching, emotional, and fascinating story. A worthy sequel to ‘The Bear’s True Mate’ (which you should definitely read first). Logan thinks his life is over now that he has no claws, can’t hunt, and can’t defend himself. He decides to run as fast and far as possible, even though it means losing the shifter friends he bonded with while in captivity. Logan is annoyed that Shawn keeps following him and convinced he is worthless as a mate when Shawn tells him that is why he can’t let him go. As Shawn slowly wears down Logan’s resistance and some of his past emerges, I began to understand why he is so skeptical. But when he lets Shawn come closer, and they finally claim each other, Logan gets so sick that they have no choice but to turn back so they can get help. Shawn knows Logan is his mate, but he has a hard time convincing the depressed cougar shifter. Like me, Shawn has no idea why Logan is so skittish, but when he finds out, at least he understands a little better. It only increases his determination to prove that Logan is a “worthy” mate, and claws or no claws, Logan is his. Logan’s weird cravings and sickness worry Shawn, and he is relieved when Logan finally agrees to return to the doctor who helped Ajay when he had the same problems. The shock that follows has Shawn reeling, but nothing can stop him from supporting Logan – no matter what fate throws at them. If you like imaginative shifter worlds with male pregnancy that has a scientific explanation, if fated mates having trouble believing they are worth it sound interesting, and if you’re looking for a short, heart-wrenching read that adds some interesting details to the larger picture of the series, then you might like this novella.