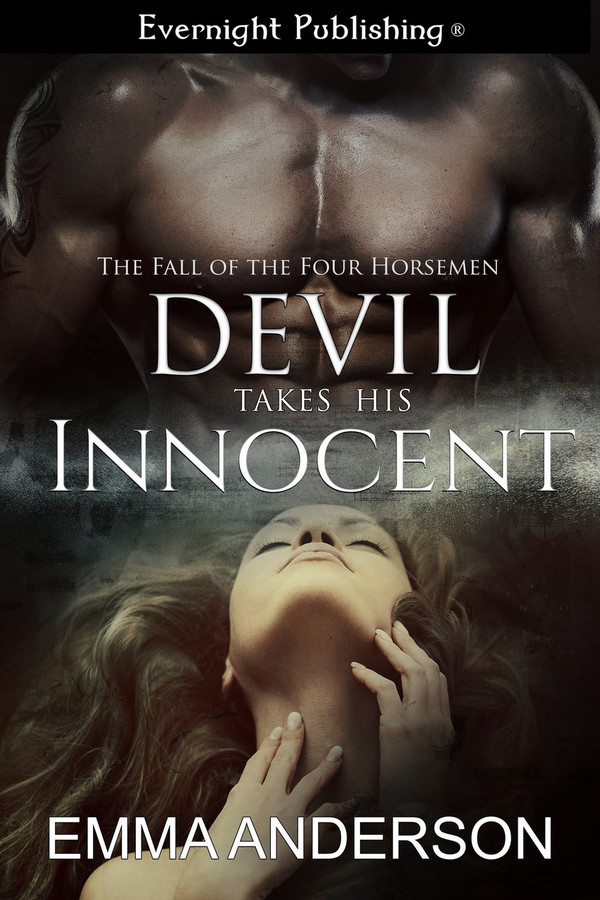 The Fall of the Four Horsemen, 1

Devil Torments is a vampire living in a world where one man’s weakness paves the way for another man’s gain. When a gambling addict offers his daughter as payment for his debt, Devil accepts. Sex without strings is exactly the way he likes it. Love is a concept for fools, the ultimate weakness. Little does he know, he’s about to meet his mate…

In order to protect her best friend, nurse Gabby Winters must bow to her abusive father’s demands and offer her innocence to a stranger. She never expected to feel anything, let alone find herself irrevocably tied to the man. But can Gabby learn to accept that Devil’s scars run deep, and the love she’s spent her life secretly yearning for is forever out of reach?

If Devil thought that keeping Gabby at arm’s length would keep either of them safe, he was dead wrong. When danger lands at Gabby’s feet, it’s up to Devil to pick up the pieces. Will he come to realize that love isn’t a weakness and Gabby is his greatest strength, before it’s too late? Or will he lose the most precious gift of all?

“What the fuck!” Devil shouted once the woman had left the office. To say he was furious would have been an understatement. Murderous thoughts ran wild through his mind.

“Who the hell told you she was a call girl?”

Devil picked up the photo Jeffrey Harrison had given him. Only this time, his eyes saw something they had failed to earlier. The picture depicted the same woman from tonight minus the makeup. Her beauty and innocence shone through. How could he have missed it?

His murderous thoughts changed slightly. Instead of just killing Jeffrey Harrison, he planned on torturing the asshole first. What kind of father would sell their innocent daughter to pay off his gambling debts? No matter what sins he had committed, and the list was long, Devil knew that he would never contemplate such a thing. Yes, Jeffrey Harrison would pay for his crimes, and Devil would be the judge, jury, and executioner.

Though Devil had to concede that Jeffrey Harrison wasn’t the only one responsible for what had happened tonight. Devil had been just as responsible. He had been so wound up lately, that he hadn’t taken the time to appreciate this beautiful woman for what she was. Had he done so, he no doubt would have recognized the signs of inexperience and sent her away before he ruined her. Or at least recognized what she wasn’t, a call girl. He too needed to make amends, only it was for his stupidity and impatience.

As soon as he had seen the woman, he had become hard. It had been a long time since his cock had appreciated a woman so instantly. Her curves were on display in that tight little dress she wore. He’d dragged her into his hotel room, desperate to hide her amazing body from passersby. He wanted to be the only one to view such a delicious sight. She reminded him of the women from his youth. They enjoyed their food too much to worry about what they looked like. He rued the day that body image became an important factor in a woman’s life. Now, the first woman to pique his interest in a long time, and look at the way he had treated her. It was an error he would make amends for, but first he needed more information.

“I say you get that fucker on the phone and let’s hear what he has to say for himself,” Viper said, his fae yellow eyes coming to the forefront, highlighting what his body language failed to. He was pissed. He was known as Viper because he struck his prey hard and fast; they never knew what hit them until it was too late.

Devil followed Viper’s advice, and a few seconds later a ringing tone could be heard through the phone’s speaker. “Hello,” came the wary greeting.

“Um, yes, Mr. Torments. Was there a problem with Gabriella?” The man’s question had Devil emitting a low, menacing growl.

“Yes there’s a problem. She’s not a call girl like you insinuated.”

“Um, yes, well,” the man muttered down the phone.

“What did you tell her to get her here?” Devil demanded.

“The truth! It’s not like she’s innocent,” the man scoffed.

“What the hell did she ever do to you to gain such disregard?” Devil asked, furious at this man’s attitude toward Gabriella.

“She existed,” the man replied with venom in his voice. “Do you have any idea how difficult she made my life once my wife found out about her? Her presence all but killed my wife.”

Hearing enough of this man’s viciousness, Devil stated, in a voice that left no room for argument, “Tell me everything you know about her! Then you will stay out of her life. You will have to clear your debt with us without using your daughter any further. Do I make myself understood?”

The truth was, the money meant very little to him at the moment. Revenge was the only course of action in Devil’s mind. By the end of the phone call, he had this guy’s slow death all planned out. But first he needed to make things right with Gabriella. She deserved nothing less, and so much more.

I thoroughly enjoyed this story. Gabby is a woman who hasn&#039;t had an easy life. But this is a lady who makes the best of things. I loved how protective she is of her best friend. Devil is the classic hunk who needs a kick in the pants, and Gabby gives him one. This is a story of twists and turns. I can&#039;t wait for the next.

His to Take by Sam Crescent