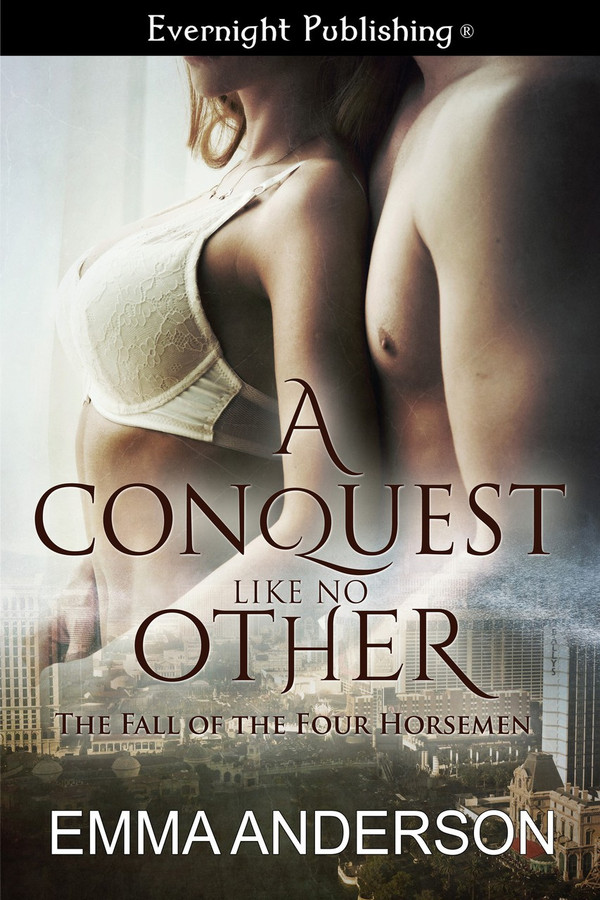 The Fall of the Four Horsemen, 2

When Nikki Greene is kidnapped by a crime boss, the last thing she expects is for an even more dangerous man to rescue her. She’s already survived one brutal attack by a man claiming to care for her. She’s not in the market for love, even though her tattooed hero awakens urges she never expected to feel again—and some she’s never felt before.

Viper, a renowned playboy, doesn’t want a mate. He likes the freedom of taking a different partner to bed each night. But the moment Nikki enters his life, his bachelorhood is doomed. Now he must work past Nikki’s trust issues to win a place in her life and bed. He’s determined to prove that her scars are only skin-deep and together they can have it all.

But trouble is coming for Nikki. A menacing presence lurks on the fringes of her world, waiting for the chance to prove to Nikki that revenge isn’t sweet, but it is deadly. Can Viper save her this time, or will he lose her for good?

Nikki slumped with her back against the closed front door. To say she was relieved to see Viper leave was an understatement. Again her hormones reacted to him. Why they had to come to life after three years, she had no idea. And even worse yet, for her best friend’s new brother-in-law. The situation had disaster written all over it. Even if her fear would allow her to make a move on the unsuspecting man, her conscience wouldn’t. As he had pointed out, they were now family. And she couldn’t risk Gabby’s happiness by throwing herself at Viper. It would lead to uncomfortable family gatherings.

Pushing herself off the door, she attempted to eject her sexy rainbow-colored angel out of her mind as she went about getting herself ready for bed. By the time she was snuggled under the blankets, she was exhausted. Half an hour later, sleep still refused her. Her body needed something—something she knew B.O.B. could provide.

Throwing the blankets back, she quickly removed her pajamas. The cool air hit her sensitive nipples, causing them to harden further. They were begging to be teased. Her hand molded around her tiny breast, roughly massaging it. The harsh manhandling had more juices leaking from her already flowing pussy. Her thumb and index finger found her pebbled nipple, pinching it hard.

A groan escaped her as her hips lifted from the mattress, seeking out its partner. The hand that held B.O.B. traveled lower. B.O.B.’s head circled her hypersensitive clit. Electricity raced through her whole being, enticing her orgasm closer to the surface.

As if on its own accord, B.O.B. found her entrance. Scooping up some of her escaped juices, it slowly entered her. Each thrust took her higher, but still it wasn’t enough to take her over the edge. Suddenly Viper’s image popped into her mind. No longer were her fingers pinching and pulling at her nipples. Instead, his mouth had engulfed her breasts, his teeth worrying her nipples and sending shock waves throughout her whole being. As for B.O.B., he had been replaced as well. Viper was carrying her body to the heavens, and she welcomed it. Her imagination took the fantasy further.

Her legs widened, allowing room for Viper’s large body. The thrusts were coming harder and faster. Her orgasm quickly approached, catapulting her over the edge. Still Viper’s body continued to drive into her. Suddenly he pulled out and turned her. With her head on the mattress and her backside in the air, he slammed back into her. At this angle it was enough to encourage another orgasm to make itself known. It danced around the edges, avoiding her pleas for completion. More punishing thrusts were delivered from behind. Then it came, a command her body seemed to be waiting for.

“Come for me, sweetheart.”

Light burst behind her closed eyelids right before she screamed her completion. As she tumbled back to earth she felt tears falling from her eyes. Her head was turned to the side, allowing the sheet and mattress to absorb them. It was then that she realized how uncomfortable she was. True to her fantasy, her backside was in the air, while her head rested upon the bed. One arm held her balanced while the other one was under her body. Her hand was between her legs, holding B.O.B. in her pussy.

The man she was trying to view as family had somehow accomplished the impossible. In her mind, he had truly been with her in this bed. Yet the fear that usually accompanied the idea of being sexually involved with a male was absent. How was that possible? Why was he having such an effect on her?

This man with his brightly painted skin and rusty red hair had her craving things she didn’t think were possible to ever want again—a sexual relationship. His messy locks with their just-out-of-bed look called to her fingers. They desperately wanted to delve into his thick mass of hair. His plump, kissable lips had her mouth watering and her chin itching. In her mind she could see the stubble rash that would appear after a kiss from her new fantasy go-to guy. How was she ever going to look at that man again without blushing?

She was glad that she didn’t have to see him every day. Otherwise she suspected her rampant hormones would have her doing something impetuous. With her hormones in overdrive she knew it wouldn’t be long before she threw herself at this man who was only being friendly with her because of Gabby’s relationship with Devil. She needed to minimize her exposure to Viper. It was the only way she wouldn’t embarrass Gabby and herself.

This is the first book I’ve read from Emma Anderson and I was worried that I would be lost since it was book two in the series… HOLY CRAP do I want more… The premise for this book is genius and I love the twist… The story of the four horsemen has always been a source of fear for many people. Emma has found a way to humanize them and give them understanding beyond their jobs… I cannot be happier to have read this book. The prologue for this does a great job in introducing the characters and making sure the reader can follow the story. Nikki is a nurse who along with her BFF is kidnapped and then rescued by, Chaos, Devil, Judge, and her mate Vyper. Nikki’s life has been hard and is still dealing with the nightmares from her past. Vyper is the bad boy womanizer of the group, that after a great loss can’t stand to be close to anyone for fear of losing them. I loved these characters not only were they believable but they are memorable. I love a book where you enjoy the characters and the storyline far more then the sex. Now don’t get me wrong the sex was hot but the story was better. Don’t just get this copy get the first in the series Devil Takes his Innocent and your copy of this book at Amazon or at Evernight Publishing. I give this book 5 diamonds and can’t wait to read the next book in the series…

Viper and Nikki. Each of them have a heavy past. They must trust each other to develop their bond. But Nikki&#039;s ex is looming in the shadows. We have a good plot, some angst, some (a lot of) smut. A good reading. I&#039;ve read the first book and it&#039;s a good sequel. I&#039;m waiting the next book impatiently.