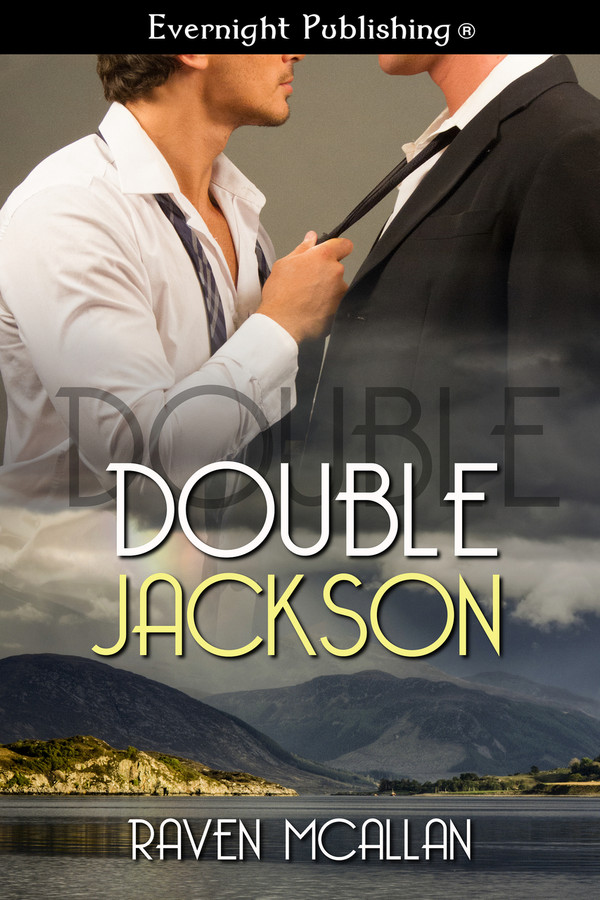 Jackson Garrick at Tits and Bum Club—gay in more ways than one.

As morning wake-up calls go, those damning headlines made for a rude awakening. The renowned actor is a one-man guy, thank you very much, so why would a doppelganger set out to discredit him, and more importantly, who is it?

As the mystery unravels and loyalties are tested, Jackson has to rely on his husband, housekeeper, and friends to keep his reputation from swirling down the drain. Fortunately, Jackson's husband Collum knows just how to keep his man from worrying. Only one thing to do when you're stuck inside waiting for news—lots of mind-blowing sex.

Jack pulled his t-shirt and jeans off and threw them into the general direction of the dirty laundry basket. They hung over the edge like a drunk visiting Huey. "I'll put them in properly in a sec." He stretched his arms above his head and twisted his body to get rid of some of the aches and pains.

Coll made a noise somewhere between a moan and that of a strangled rabbit.

Jack turned in his direction and smiled wickedly. His cock was erect, and jutted proudly out from his body. Coll salivated and cleared his throat as he worked his mouth to reduce the sudden dryness in it. His own cock was erect to the point of pain, and his pre-cum spread down its length and onto his balls.

"You said something?" Jack just about purred the words.

Coll sniggered. Jack had taken up an Atlas pose and flexed his muscles. Then he dropped one hand to his cock and stroked it ever so slowly from tip to base, stretching and sliding the skin over the rigid core.

"Depends if you think we can generate enough heat?" Coll kicked the covers back until they landed on the floor and copied Jack's hand movements on his own cock.

"Mixing all the ingredients together?" Jack said in a gravelly tone. "Oh, why not. And no spoons are needed. Hands are best for mixing."

"Tongues add more liquid?" Coll said as Jack crawled up the bed next to him and lay on his side so they were almost cock to cock.

"Definitely. Mind you, I think you might need to be head chef tonight. Except, You have to get up in an hour or so."

"I'm up now," Coll said. "Wide awake and waving hello." He moved his cock from side to side. "I think we better start mixing right away or the er, liquid might leak out and be wasted."

Jack roared with laughter. “What a good idea. I'm knackered. Do you want to direct?" He kissed Coll on the cheek and trailed his tongue downward to lave each nipple in turn.

Coll sighed in pleasure. The tiny sucking action and the nips that followed sent his arousal higher and his pre-cum gathering on his cock faster than before.

"My turn." He bent his head and Jack held his cock up. "Please, love. Kiss my cock and then fuck my ass. I need to feel you in me."

"That's an offer I can't refuse." Coll sucked in the end of Jack's cock and tasted the salty-sweet pre-cum as it coated his tongue. He grazed his teeth along the shaft, tight enough for Jack to hiss and moan. Then he let Jack's dick slide out of his mouth with a noisy plop.

"On your back, then." He stretched his hand out and fumbled in the cabinet for lube and condom, as Jack rolled over with alacrity.

It took Coll scant seconds to rubber up, and to coat the condom and the entrance to Jack's anus with lube.

Coll inched forward on his knees and pulled Jack where he wanted him.

"Put your ankles on my neck."

Jack obliged and Coll wasted no time to inch his cock into Jack's dark and welcoming hole.

"More. I'm ready." Jack groaned the words and lifted his ass off the mattress. "Fill me, for fuck’s sake, bloody fill me now."

"My … pleasure." Coll panted the words and pushed past the ring of muscles that guarded the entrance and filled Jack. He withdrew almost to the head of his cock and pressed forward again.

It was enough. Coll let himself go and fell over the edge into a hard, fast fucking climax.

Copy received as a gift from the author for letting her &quot;use&quot; my name in the book! OK so I&#039;m biased and I fully admit it but I love Raven&#039;s books and devour them as soon as they go live. But this one is a little different simply because she asked if she could pinch my name for the housekeeper! The story itself is one of her &quot;Man Love&quot; stories and is rather high on the scale of &quot;Hotness&quot;. But more than that the story line features mysterious things going on. Absolutely loved it. If I had one criticism at all it would be that I finished it in one sitting and now I feel that sadness you get when you hit the end of a book that was really enjoyable. Will just have to go back and start again.