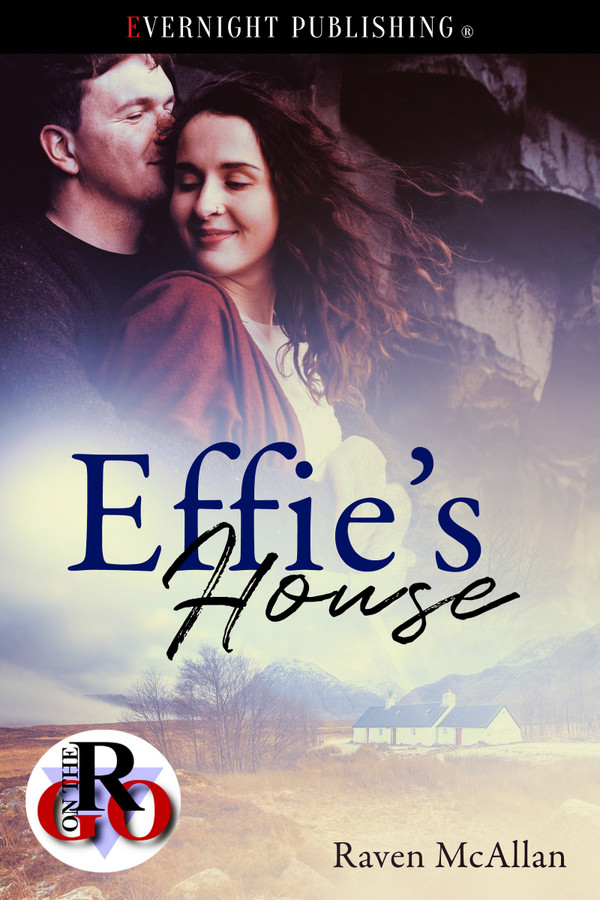 A spectre, a ghost, or something more sinister?

It seems it’s not only her own future she has to decide but his as well. There’s just one problem with Roddy Boyd, and it's up to her to decide their fate. Does she want to make that decision?

“How did you get in?’ She grabbed a candlestick and wondered how well it worked as a lethal weapon.

Then she saw his face. Dropped the candlestick and narrowly missed her foot.

He picked the candlestick up, handed it back, and curled her fingers around it. “Me,” he confirmed. “Who else could it be? You knew I’d be here now. That’s why you waited.”

Now she really did think she was dreaming … or having a nightmare. “Rubbish, I’m just about to head back to the hotel.”

By the expression on his face, he didn’t believe her.

“Who are you?” More to the point, who in their right mind hands back what could do you a serious injury? Ginny decided there and then she’d never go back to The Happy Forager, or do any foraging herself. It wasn’t worth the worry.

He smiled. The smile she’d seen recently. The smile that lit his face up…

“Why do you look different?” she blurted out. “What have you done to your hair?”

He put his hand up to the short dark layers. “How do you mean?”

“When did you have it cut?”

Ginny shook her head. Why was he lying? “Where’s your earring?” Come to that, something else was different. A well-cut tweed jacket and cords, no hat, gloves, or boots … on a hot day? Why had he changed out of… What had he been wearing? She wracked her brains and drew a blank.

It’s winter and snowy. Where are all these hot day ideas coming from?

“You, me, heat…” The voice sounded amused and aroused. Ginny decided she could see it far enough. It wasn’t helping matters.

“In your dreams again, mate.”

“My what?” He sounded affronted.

Oh, grief, she’d spoken aloud and now he thought she was talking to him all the time.

“Oh, er nothing,’ Ginny improvised rapidly. “I was wondering where your earring had got to. You know.” Ginny flicked her own lobe where a tiny row of silver hearts dangled. “You had it then you didn’t, now your hair has changed, still no earring. Screwy. Have you just lost it? Any idea where?”

“I think you’ve got the wrong bloke.” He touched his own lobe. “I wouldn’t wear one.” If an expression could convey a shudder, his certainly did.

“You did a few hours ago.” Or did he? Whatever, his hair had been different “When you…” She hesitated. After all, she couldn’t, in all honesty, say he’d had the earring or that he accosted her, or even made her feel a tiny bit threatened. “When you were here earlier,’ she finished with somewhat less than the forcefulness she’d aimed for. “And you didn’t introduce yourself then either.”

“I wasn’t here earlier,” he replied in an exasperated tone. “I told MacTavish to tell you I’d be here at three. Here I am.” He folded his arms. “You know why.”

“I know bugger all.”

“You’ll know him when the time is right.”

Now the voice in her head was female. “I don’t want to know him.”

The scent of violets overwhelmed her once more.

“Look, Miss Soutar, I haven’t got time to play games.” The real-life guy—not a voice broke into her reverie.

“Good, then tell me who you are, why you are here, what you’re playing at, and what is it with the awful smell of violets?”

“Violets?” he said in a puzzled voice. “I can’t smell anything.”

What the? No wonder he’s staring at me as if I have a screw loose.

She swiveled around so fast it was a wonder she didn’t go giddy.

“You must be able to, it’s so strong. Enough to make me gag.” She waved her hand around to indicate something, somewhere. “Bloody strong, not air freshener.”

He raised his eyebrows. “Sorry, honey, no can do, air freshener or whatever. Zilch. I can think, smell, and conjure up other stuff, not violets.”

Honey? Oh, how I wish. Where had that come from? He was arsy antagonistic and… Damn if his voice wasn’t climax-inducing-sex-on-legs hot. Ginny did her best to take control of the conversation—and her senses.

“If you say so. Look, don’t take this amiss, but, who are you and why are you here?” There, that sounded strong and positive, didn’t it? No matter if she had to throw a brick at him or run him over if he started any funny business. Somehow, she needed to find out just what was going on and what his involvement was. “It’s all a bit weird.”

How the hell could she fancy anyone with an up-their-own attitude like he had?

“Nowt so queer as folk, love.”

“Not at all,” He sounded amused. “It is what it is, what should be. If you keep the faith, then what is there to worry about. You … me … it is as it should be.”

Definitely screwy. Ginny thought over what she’d eaten and drank over the past few days. Apart from that risotto, no mushrooms or unknown greens. No wacky baccy—she’d never smoked—no funny-smelling drinks.

Clean as the driven snow. Just like the lawn outside. For far too long. There hadn’t even been a forbidden fumble in ages.

“Never, so not you. You are not boring or mundane, you are life going forward.”

“Yeah, yeah, I wish.” Ginny looked at her Ugg-clad feet. If only.

This time, it was the bloke in front of her who spoke. She thought.

“Good question. Because the house, Effie’s house, was left to me. A direct descendant. Not sure how many greats in front of the word gran, but a fair few over a couple of hundred years. Evidently, it’s my turn now. As a descendent, distant or not.”

“Oh, you are that,” he said. “A descendant, and I guess distant. The spitting image as well.”

She looked down at her feet once more. The Uggs might be warm but they weren’t elegant “You reckon? Like this?”

He nodded. “Same, but more up-to-date.” He grinned. “She wore half boots, but apart from that. Long skirt and well…”

“Yeah.” Ginny grimaced and then blinked. How the hell had I heard my footsteps? She distinctly thought she’d walked. Heard her feet as they moved over the parquet. Felt the vibrations thrum through her.

Heard my feet? How?

“Footsteps,” she said through a ringing in her ears. None of it made sense. “I saw myself, heard my footsteps, but how…”

The guy next to her nodded. “She was the same.”

“How the hell do you know that? Effie was here years, lots of years ago.” Almost 200 to be exact.