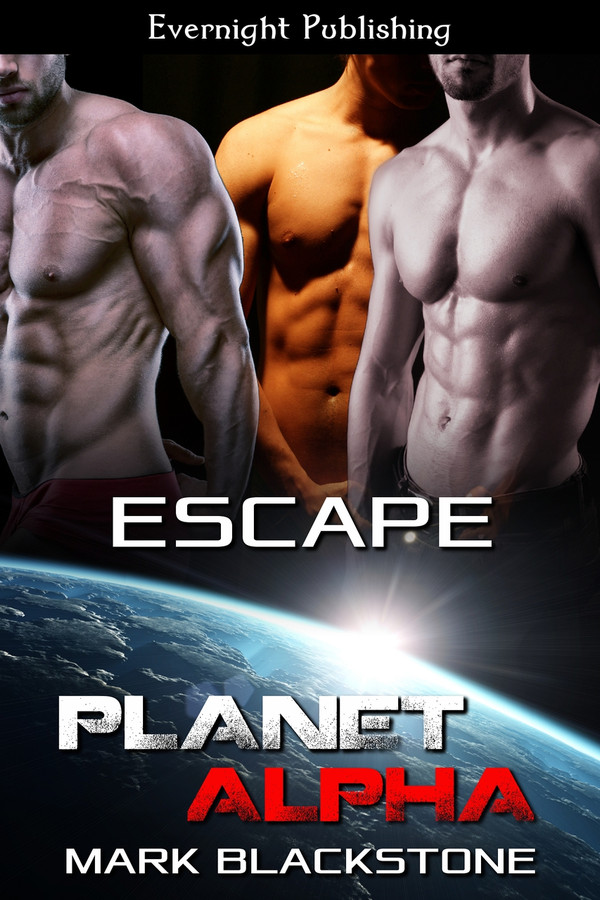 When the notorious Alphan fighter pilot, Avollo, is captured in battle, he's expecting to be transferred to a military prison, so when he arrives at a civilian Xyran prison on a remote jungle moon, he knows he's in trouble. He's surrounded by his enemies, and he knows his only chance of survival is escape—and quickly.

Geth and Nix are Xyran bondmates who've been waiting years to get their revenge on the fighter pilot who cost Geth his military career. When they arrange to have Avollo transferred to their prison, they think up a fitting scheme to put their Alphan enemy to death.

Without the vast reaches of space between them, the Xyrans and the Alphan come face to face for the first time—and they realize their war is just beginning. A war of lust and love. A war of denied desires.

Avollo fell into a low crouch and danced around the edge of the ring, keeping his distance from his armed opponent. He kept his hands out before him in a pose of constant readiness. Nix leaned forward against Geth’s chair and watched, expecting Avollo to die just as Geth had planned—chopped to bits in the arena. It was the least he deserved, after what he’d done to Geth.
But Avollo was quick on his feet. He never stopped moving, never gave his foe a target. The quad blade struck dirt again and again as Avollo stayed one step ahead of the blows, anticipating his opponent’s strikes.
Geth sat forward in attention, his strong hands flat on his knees. “Look at him move!”
Nix was. Intently. And his cock was rock-hard now. He snapped his fingers at the guards, banishing them from the balcony. As the Commandant’s lieutenant, he had that authority. He was sure the guards went happily, because that meant they could get down to ground level and see the fight better. Nix didn’t want them there to see how much he was turned on by the graceful Alphan.
Geth slid forward to sit on the edge of his seat, and Nix saw how his head swayed with the movement of the fight. Avollo was impressive, there was no denying that, but he’d been brought here for a reason: to die. To pay for what he’d done to Geth. But now the Commandant seemed to be almost hoping Avollo would win, for every time the prisoner dodged a blow, Geth clenched his fist in excitement, and when Avollo tackled his opponent around the knees and brought him down, Geth actually let out a cry of triumph.
“Geth?” Nix came around to stand beside his bondmate. “He’s your enemy. He must die.”
Geth spun around in his chair to look for the guards. Clearly he was shocked that Nix would speak so in front of them, but when he didn’t see anyone there, he nodded at his bondmate and shifted his gaze back to the fight. “Of course he will die. But if he could win in the oron zai, naked and unarmed?”
Yes, it would be a glorious victory, and thus Geth would be even more glorious when he defeated Avollo in single combat. If Avollo could rise in the ranks and become champion of the arena, the Commandant himself would enter the ring to exact his vengeance.
Nix glanced down at the bulge in Geth’s pants. The outline of his hard shaft tented the fabric, and the sight of his bondmate’s arousal excited Nix. They both found Avollo irresistible. His perfect body was made for hard fucking.
Nix slipped around in front of Geth and knelt before him, undoing the buttons in the crotch of his bondmate’s breeches. Geth checked behind him again and, satisfied that they wouldn’t be seen, sat back and hummed. Nix reached inside the fabric and pulled Geth’s stiff cock free. It was massive, with a girth as wide as his wrist. Red swirls infused the dark skin of the shaft in anticipation of the pleasure the cock was about to receive. Nix flicked out his tongue and tickled Geth’s cock. Geth growled and shoved Nix’s head down on his cock, forcing the shaft all the way down his throat. Nix gagged but held his bondmate’s twitching cock securely in his mouth, wrapping his forked tongue around the shaft and milking out Geth’s ecstasy. Nix knew this was what he was good at, and it pleased him to please his bondmate.
“Don’t you want to watch the fight?” Geth asked between grunts.
Nix responded by sucking faster and harder on the large cock stretching his mouth.

Another visit to planet Alpha with its tradition of triads, strong Alphan warriors, their brutal Xyran enemies, and stubborn humans who sometimes get right in the middle of things –quite literally. This time it’s an Alphan fighter pilot, Avollo, who ends up as a Xyran prisoner and is brought to a jungle-covered prison moon. It was an interesting difference to see one of the usually in-control Alphans in a situation that looks hopeless. Of course Avollo has a different perspective… and ‘Escape’ is the title of this story. As soon as I met Geth and Nix, the Xyran bondmates who have been waiting to take their revenge on Avollo and who are in charge of the prison where he ends up, it became obvious that not just Avollo was in for the battle of his life… All three main characters are hardened warriors, and their view of life, each other, and relationships reflects that. There is a lot of violence in this book, much as expected when a warrior becomes a prisoner and lands on a harsh prison moon. Geth and Nix, while bonded, are not lovey-dovey with each other. They do work together to defend themselves, to capture Avollo, and to “slate their lusts”, as the saying goes. But as for love? If you listen to their words, love is for weaklings. If you watch their reactions and read between the lines though, it becomes apparent that they know exactly what love is. Avollo has never confronted Xyrans face-to-face, he has no idea why the two are after him when they set out to chase him through the hostile jungle once he has escaped, and it takes having to face a common enemy for him to start seeing the Xyrans as anything other than enemies to be killed. Once that happens, other instincts take over, and the three warriors face the challenge of figuring out if, and how, they can stop fighting and become physically intimate. If you like tough guys, if you think actions speak louder than words and want to see that principle applied to men who start out as mortal enemies, and if you’re looking for a read full of macho behavior, warriors’ honor in action, and some very rough loving, then you might like this novella.