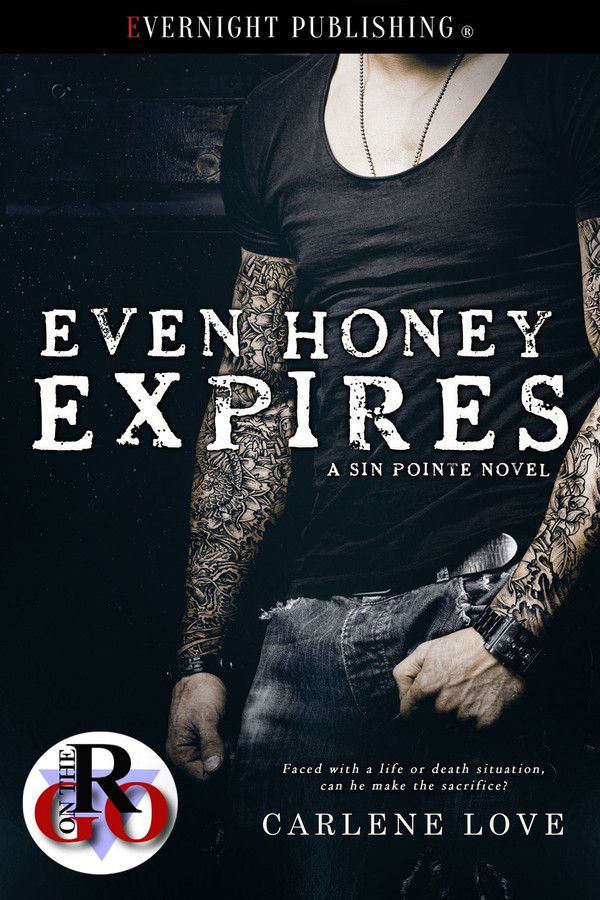 Sin Pointe drummer Will Cordero has good reason to keep his marriage a secret. In an age of no privacy, there’s too much danger and drama should he introduce Honey to the Sin Pointe masses and he’ll do whatever he can to protect her from that. Besides, it’s been pretty perfect having her all to himself. Until one day when he discovers a note she’s written that he was never meant to see.

Living in seclusion has left Honey feeling invisible, pushing her to the breaking point. The secret is no longer their shared adventure. While she is his one source of joy in a mad world, she needs out and he admits he must let her go. But he just can’t. One night, it all comes crashing down on them when Honey snaps, rocking Will’s world. Faced with a life or death situation, can he make the sacrifice and set his soulmate free in the name of love, or will he hold on until his, and her, last breath?

He was no songwriter, but a few notes began in his head, and immediately, they were hers.

He hummed the melody, and then a few moments later whispered impromptu words through a tight throat as they came to him. “I never should have made you lie. The only girl who ever saw me can’t stand the sight of me. But you won’t cry. No, you won’t cry.”

She brought a hand up, and nails with weeks old, violet chipped polish rubbed at her nose. The black cord of her earphones was wrapped around her pinky finger and wrist. No jewelry, his girl wasn’t flashy like that. But her simple style didn’t explain the missing wedding ring. Nope, that was all his fault. Last time he’d checked, the silver bands were still hidden in their sock drawer, right where Will had suggested they leave them. For safe keeping.

He untangled the cord, freeing her bare wrist, and she didn’t budge. “You always could sleep anywhere,” he whispered to her, his heart warm with nostalgia but also broken. On a pile of suitcases at LAX, through his last concert… Jealous of that ability, he continued, “I won’t make you lie anymore, Honey.” Not now that he knew her secret truth. He’d made her miserable. Worse than that, he’d made her feel like nothing. Honey’s note crossed his mind, and he winced.

“How ridiculous am I? I’m just this invisible nothing that has no effect on anyone or anything. Not even Will anymore. I hate this. I hate me.”

A peaches and cream, soft shoulder peeking through her red hair took his attention, and he wanted to rub it and tell her she was everything. That she was unique and special and that humanity needed beautiful souls like hers in it. He was going to give her back to the world, back to her family who loved and would be there for her. The words were there on the tip of his tongue, but the sound of bubbles popping brought him back to the kitchen. Exploding butter sauce burned his stirring hand, leaving a blister as he hovered over the pot, but it was something good he could give Honey before he left.

“Holy shit—ake mushrooms,” he hissed, trying out the alternative cursing term she’d asked him to use when he was home. He’d tried but failed more often than not and regretted that now. He licked the drop and tasted a hint of burnt oil over his burnt skin. To save the flavor of her meal, he quickly added a spritz of apple cider vinegar, a tip he’d learned from her the first time they’d cooked together. Skipping the ladle, he poured the sauce directly over her plate of steamed asparagus and rib eye. Not particularly well done, not perfect. But not rotten.

And then he went to the kitchen cabinet, pulled out a napkin, and scribbled the words of the song he’d made up a few minutes ago. The ballad for the woman she’d been before he’d broken her.

Shuffling quietly into the living room, he placed the note near her messy head with her plate, a clean napkin, and a set of the thick silverware they’d stolen from an overpriced Mexican restaurant back when they’d been partners in crime.

It would be the last time he left her like this. They’d made two decisions as newlyweds.

Their marriage had to remain secret from the outside world.

And goodbyes were just too hard.

“It’s time to give her back,” he said under his breath, his heart shattering. He left their apartment with his head hanging low, lucky drumsticks fisted in his hand, and closed the door before the last bits of twilight had a chance to stream in and wake her from her sleep. No more lies and no more goodbyes. Standing near the apartments’ pool, he paused and tried to think of a better way. But no, she’d been clear in her note, even though she’d thrown it out.

Loving him hurt her.

The secret wasn’t their shared adventure anymore. It was her constant pain and reminder that she would always be invisible, to everyone but him. And with Will gone so often, it wasn’t enough anymore. Good, sweet girl, she’d lasted all this time. He’d love her forever for that.

Will, please come back, Honey thought, as she slipped away from her body.

Carlene Love has a way of enveloping a reader in just a few sentences and not letting go until the last word. Even Honey Expires is a beautifully written short story proving love can span the test of space, time, and even life. It&#039;s the perfect one sitting read and a great accompaniment to the Sin Pointe series but also works as a stand-alone story.

Will is a member of a avaunt guard band and it could be dangerous for the fans to know he is married. He keeps his wife Honey a secret – even from his bandmates. When he realizes he’s not being fair to Honey and is destroying their love by keeping her hidden, he decides it would be best to leave her. Events beyond their control thwart Will’s intentions and the pair end up in extreme danger. This book is unusual to say the least. A little bit of the paranormal, confusing Will’s decisions, although he isn’t aware of Honey’s out of body experience. His love for his wife comes across as wonderful and unselfish. He’s willing to sacrifice their marriage to enable her to survive. I did feel it was a bit on the selfish side that he wouldn’t leave the band for his wife’s sake, but had to admit this could also have had a bad effect on the marriage. Not bad, and I felt the length was just about right.

This book melts my heart. It leaves you wanting more.....it seems the author has another book in the works. Yay! I look forward to reading more of Will&#039;s story.

Even Honey Expires was really good. I thought I’d just read the first chapter and then go to bed and finish the next day, but every time I got to the end of a chapter, I wanted to read one more, etc....I really laughed when Will said he was having a heart attack and a stroke! Loved it!

Let Me See by Carlene Love