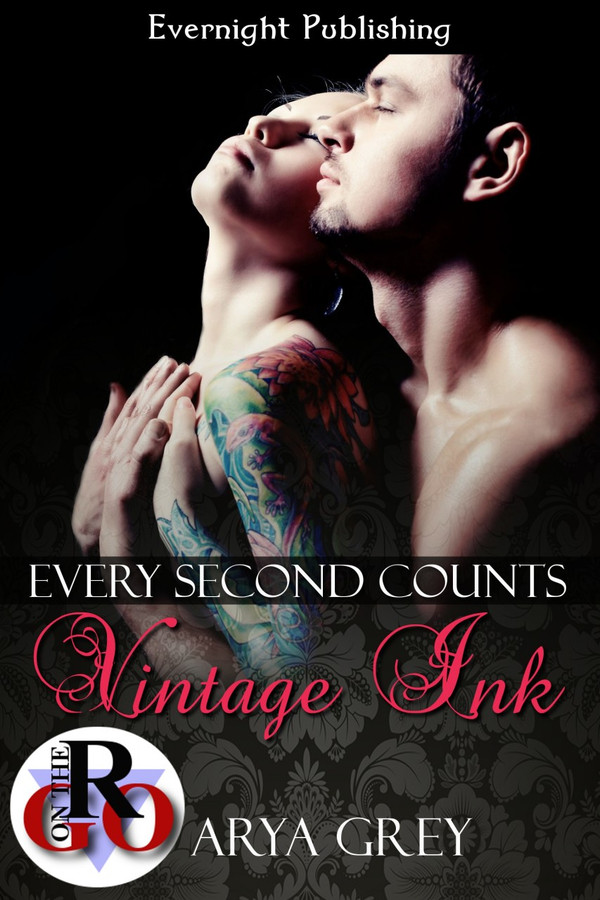 Faye "Lux" Prescott has one passion in her life, her thriving tattoo business in the heart of Phoenix, Arizona. Creating art and working with her friends for a living—who has time or need for a man in her life?

All that changes when Brody Cameron walks into "Vintage Ink". The enigmatic stranger is booked for an impressive tattoo and Faye finds herself falling head over heels in lust—or is that love?

Brody's life has been tough, however, and when he reveals his secrets, can Faye help him move forward, or is their budding relationship doomed before it has even begun?

It was a typically warm Arizona morning. Crickets played their song, and early riser's engines roared through the dark metropolitan streets of Phoenix. Eight o'clock was a particularly early start, but Faye had a stack of paperwork to sort before her first client at ten.

"Vintage Ink" was her baby. A first time business owner, Faye opened the tattoo parlor only a few months prior. They'd had a flush of new clients after an exhibition of the crew's artwork at the last "First Friday"—Arizona's local art day. Word spread and the phone had rung practically off the hook. A song sang in Faye's heart. She was proud that her decision had paid off, but more money always meant more paperwork.

She turned the keys and opened the glass door. With her foot on the edge of the metal rim, Faye punched in the appropriate digits on the alarm before allowing the door to close behind her. She placed her cup—purchased at the local coffee shop by her house—on the floor and locked herself in. With a flick of a switch all the lights wavered into a soft glow, illuminating the various artist sketches on the walls. Each was framed with a Victorian, vintage wood. Faye had wanted the entrance to be light and inviting, while the reception was dark and noticeable, with black vinyl curves and brass skulls nailed to the exterior.

Faye took her coffee from the floor and placed it next to the keyboard of the computer that was birring to life. She allowed herself a moment to look through the shop iPod until she found the "Black Metal" playlist. There's nothing like a little ‘Cradle of Filth’ to get you through a thoroughly mundane task on a Monday morning!

She wrapped her long copper waves into a coil at her crown and fastened the loose bun with a ballpoint pen. She slid her round framed glasses— reminiscent of Gregory Peck—on and sifted through the documents in her tray, starting with the bank transfers and card receipts.

Faye's mind was so full of numbers that she didn't see Jackson standing at the door with a cup in each hand, banging the door with his chin—the sound muffled by his beard.

"Jesus," she said. Faye pulled her loose black tank from her belt as she stood and let Jackson through the door. "Sorry, Jackson, I didn't think you had an appointment until later." He gave her one of the cups and hurried inside.

"I don't, but I thought you could do with a little help and a good cup of joe." He smiled.

Faye silenced a laugh as she noticed the ring in his nose had turned. "Your septum's crooked, babe. Thanks for the gesture but I grabbed some coffee on my way here, and there's nothing you can do to help. I just have to suck it up and get through it."

"With a little help from Danny Filth. Always did the trick for me," Jackson said. He shrugged. "I've got a few sketches I can work on and there's no such thing as too much caffeine to a tattoo artist."

"True-fuckin-story." Faye sighed. "Got anything exciting in today?" She was trying to work but avoid being rude to her oldest friend and colleague.

"Naturally." Faye and Jackson had an inside joke about butterflies and tribal. Neither of them enjoyed doing them but were forced to by their boss early in their career. "Tribal wings?" she asked.

"You know it." He dumped his bag on the stool inside his workstation and swiped something from the desk. "Check this out, though." Jackson placed a sheet of paper on her keyboard.

Faye glanced for a second, lost in the week's totals, when the design caught her attention. Black and white charcoal, grotesquely detailed in typical Jackson style, was a black beast with a fatal wound in its stomach, entrails and all.

"Norse Mythology, I know." Faye interrupted him. She dropped her glasses to the desk and studied the drawing closer. "Who's getting it?"

"Some guy called Brody. He wants it across the base of his back and around his ribs. I hope he's got a good threshold for pain, because that ain't gonna feel too good."

"Worth every second. You're making me wish I had room left, Jack. This is fucking incredible!"

"Thanks, Lux. What 'bout you? Anything exciting? Haven't you got that chick with the octopus and the huge ti—"

"Don't be an asshole, and no, she's not in until Saturday. I have a floral chest piece this morning and the start of a nautical sleeve in the afternoon."

"You ink nautical in your sleep, Luxy, baby. Anyone would've expected you to have fucked off to sea with some sailor, by now."

"Not in a million years, my friend. I have a business to run." Faye placed her glasses back on when Jackson continued to talk. Her patience was wearing thin, quick.

"I meant before now."

Faye dropped the papers and lifted her gaze, peering above the thick frames of her glasses at him. "What, per say, do you mean by that, my dearest Jackson? Are you implying that I'm a sad singleton who should be shacked up by now? With a doting and hard-working husband and a circle of children running riot around my freshly cleaned, cookie-cutter house? Do you actually remember who you're talking to?"

Jackson took his sketches from the desk and with his free hand brushed his unkempt, brown hair away from his face. She had noticed that he never seemed to know how to take her outbursts, even in their twelfth year of friendship. "I only meant that you should get laid every now and then. Sex is healthy, you know."

"What can I say? The ladies love a tattooed, bearded, sexy beast such as myself."

"Yeah, yeah. Whatever you say. Now get back to work before I fire your sexy ass."

"Yes ma'am!" He saluted and bowed, before retreating to his station.

Another knock to the glass door sent the papers in Faye's hands flying in a mad whirlwind around her head. She squealed and the chair she sat on rolled when her body jerked. Her back slammed into the corner of the desk. "Argh, shit!"

Her eyes darted to the door, to see who had caught her nerves at the wrong moment, and her heart fell to her stomach.

"Hey, it's Brody. He's here to check out the sketch before his appointment."

Maybe Jackson had a point, after all…

Every Second Counts is the very short story of Faye, the proud owner of tattoo parlor, Vintage Ink. Faye keeps to herself, her only real friends are also her employees at her shop. That all changes when Brody, a new client of Vintage Ink tattoo artist Jackson, comes in for some intriguing new ink. There&#039;s no denying the sparks that fly between inked up Faye and rock band lead singer, Brody. This was a really well written, quick little romance full of drama and humor, sweet romance and sexy steam. The characters are all likeable right out of the gate. You literally want to hang out at Vintage Ink and get to know Faye and her crew. Brody is instantly intriguing, a sexy quiet rocker who has some pretty intense emotional baggage he&#039;s carrying around. I thought the relationship went from sexy flirtation to epic declarations of love rather quickly...maybe too quickly to be realistic... but that&#039;s exactly what you&#039;d expect from an on-the-go romantic read. Arya Grey creates an awesome world filled with interesting characters, and sweet romance. This book is perfect for when you&#039;re feeling the need for a quick romantic fix but don&#039;t have the time to curl up with a lengthy novel. It has everything you&#039;re craving in a speedy novella.