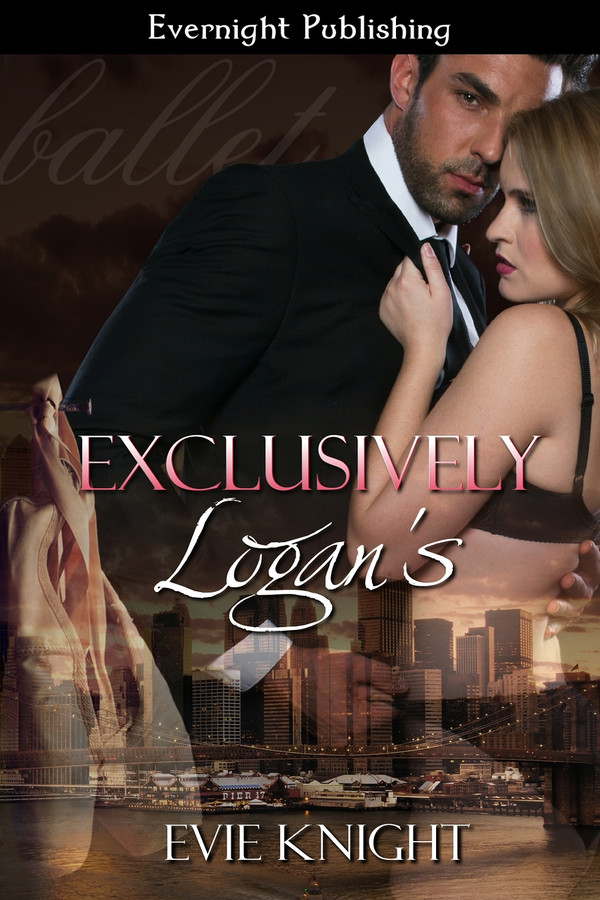 In Bed with the Enemy, 3

Logan’s enviable career success as a talent agent is surrounded by tragedy. He seeks justice and will stop at nothing to put the man responsible behind bars for his cousin’s tragic death. Everything is under control until Rissa, the ballerina posing as his personal assistant, hands him her resignation. Letting her walk out of his life isn’t an option he’ll entertain. Not now when he’s ready to make his intentions known.

Ever since an accident ended her career, Marissa dreams of returning to the life she once belonged to. When the ballet company offers to take her back, it’s an opportunity she can’t decline. Only she forgets how hard it’ll be to leave Logan, the man she’s refused to fall for. Especially when he’s made it clear he wants to be part of her life.

As deceit, drugs, and lust weave around them, they’ll have to decide if the price of love is worth their dreams.

She tightened her hold on her phone before putting it in her bag. Mistress Dubois hadn’t been happy to hear she’d miss practice today, which meant Marissa would pay for it dearly tomorrow.

“Good morning, Ms. Vallings,” the security guy behind the counter said as she walked in Logan’s building.

“Hi. I just need to drop some paperwork for Logan.” She stopped at the counter and patted her bag, hoping he wouldn’t call her bluff.

The security guard nodded and slid an elevator key card in her direction. “Just drop it off on your way out as usual.”

“Thank you.” Marissa took the card and hurried to the elevator.

After sliding the card in, she stared at the number fourteen that lit up in the black square. Hundreds of thoughts crossed her mind in anticipation at how Logan would take her impromptu visit. The elevator doors chimed as they opened on Logan’s floor. With shaky legs and a knot in her stomach, Marissa walked down the long hallway to his door. His reaction to her unexpected visit was anyone’s best guess. He’d either send her on her way or let her in and laugh at her for listening to Colin and Ariel’s exaggerated claims on his well-being. Better yet, she hoped to have the strength not to throw her arms around him and tell him she’d been stupid and wanted to give them a try.

Marissa armed herself with courage for whatever she’d find behind the black door, and rang the doorbell. A minute passed without response, so she pressed the button again, then twice more. Seconds that felt like minutes went by, and a cold sweat invaded her. She knocked as hard as she could, and then she finally heard movement inside before the door opened.

Blood-shot eyes stared back at her. “What are you doing here?”

“I was in the area and thought to stop by and say hello,” she said, hating how unconvincing she sounded.

Logan seemed to study her before he said, “You’re such a bad liar. What are you doing here?”

“Colin and Ariel called me.” If she didn’t tell him, he’d figure it out anyway.

He puckered his lips in annoyance. “Of course they did.” He looked inside his place, then back at her. “Well, you’ve seen me. You can tell them I’m alive and to mind their own business.” Logan moved to close the door.

“Let me in.” Marissa stepped forward, pushing her way in before he had a chance to shut the door on her. “You know why they asked me to come see you,” she said, dropping her bag, then turning to him.

“Last I recall you quit on me, then, in not so many words, you turned me down.” His brows drew together, and he shoved a hand in his black jeans pocket. “What exactly is it you want now?”

“I heard the news on Brittany’s case.”

“Sounds like you know everything now.” Logan spun on his heel and headed for the chair in front of the french doors opening to the balcony. “My lawyer is digging up some more dirt on that bastard. If he finds what we need, that asshole will stay behind bars for the rest of his life.” He reached for a smoke resting on an ashtray on the side table. “What did Colin ask you to do?”

Though she heard the question, it took her a moment to force herself to stop admiring the way his white T-shirt stretched along his muscled chest every time he moved. “It doesn’t matter what he asked. Can you please not smoke that stuff?”

His daring gaze met hers as he took a puff of the joint between his fingers. “It’s only weed.”

“If what Colin said is true, weed can lead you to other things.” Marissa approached him.

“Colin is wrong and so are you. I’ll never relapse.” Logan caught her wrist in midair, preventing her attempt to take his smoke from him. “It wasn’t his right to tell you my business, and since I don’t know what he said, I’ll tell you this much.” He pulled her to him. “I’ve had my scare with coke and I’m never going back, regardless of the hell I’m in.” Breaking their eye contact, he stubbed the joint on the ashtray, then focused on her again.

Shocked at his admission of having been a drug junkie before, she stood there realizing there were many things about Logan she never knew. Unsure of what to say next, she searched his hardened expression. By the look of his stubble, she bet he’d locked himself up here for no less than a week. Marissa raised her free hand and ran her fingers over his jaw. “Logan, maybe you should go out and get some fresh air.”

“Maybe you should stay.” He bent his head forward, his lips an inch away from hers. “Or leave while you still have a chance.”

An intense heat passed between them, causing a tingling in the pit of her stomach. “I can’t leave you like this,” she whispered, stroking his cheek.

“Then stay.” He touched the tip of his tongue between her lips. “But if you stay—” Logan brushed his mouth over hers, teasing her without fully kissing her. “—we will finish what we started in my office.”

His words electrified the air around her, and her heart hammered in her chest. Captured in his magnetic pull, Marissa rose to her toes and touched her lips to his. Logan locked an arm against her spine, closing the almost nonexistent distance between them, then cupped her neck with his other hand.

This is the 3rd book in the series featuring Marissa and Logan and I loved it! I feel like it can be read as a standalone although why miss out on the first 2 in the series?

Received an ARC copy from netgalley for a honest review. Two words come to mind after reading sizzling hot. After years of denying the sexual chemistry between them, it comes to a head when Marissa quits working for Logan in order to go back to dancing. Logan is a bossy man used to getting his way and Marissa doesn&#039;t fall into his commands without a few obstacles along the way. Storyline is entertaining and spicy with some suspenseful twists along with loveable characters. Overall a hot read!

Rissa has finally quit working for Logan as his personal assistant to follow her dream job as a ballerina. Now that she&#039;s free, Logan decides now is the perfect time to go after his desires, namely, Marissa. They both have demons in their closet, and will outside forces work against them to keep them apart? Exclusively Logan was sensual and seductive, with a bit of suspense thrown in. I loved Rissa, I thought she was strong, and I loved how she didn&#039;t take any crap from Logan. Logan was alpha all the way, and while I liked him for the most part, his jealousy sometimes was over the top for me. Overall, this was an enjoyable read. I hadn&#039;t read the first two in this series, but Evie Knight did a fantastic job of explaining what you needed to know, so it wasn&#039;t required to read the first two. This will definitely not be my last book by this author! I received a copy of this book from the author and publisher through NetGalley in exchange for an honest review.

Exclusively Logan&#039;s by Evie Knight is book three from her In Bed with the Enemy series. I have read and enjoyed many of Ms. Knight&#039;s books and this one is probably my favorite. The two primary characters, ballerina Marissa Vallings, and successful talent agent Logan Ashby, have amazing yet complicated chemistry and being a part of their evolving relationship was beyond compelling. Marissa has always been a prima ballerina and due to an injury believed to be precipitated by her enemy, she had to stop dancing for three years. It was during this time that she became Logan&#039;s personal assistant. Due to their employment relationship, Marissa and Logan could never explore the heat that raged between them. However, once Marissa was fully healed and able to quit her job and rejoin the ballet, they began to explore a romantic relationship. An ex-boyfriend, a somewhat secret ongoing rape investigation, and busy work schedules, all contributed to Marissa and Logan&#039;s on and off again romance. Logan is an alpha male and Ms. Knight does a great job of combining his sweet side with his protective side. In the end, they find their happily ever after. I really liked this book. It is a nicely-written read with some suspenseful twists and turns that kept me engaged from beginning to end. All the characters are interesting, and I liked revisiting with the personalities from the first two books. Although this is the third book in the series, it can be read as a standalone. Overall, this is a spicy read with well-defined characters and an interesting storyline.

I have been dying to read Logan&#039;s story since the beginning of the series and it was well worth the wait. I loved Exclusively Logan by Evie Knight and this book is my favorite of the series. The author really surprised me with his backstory of drug addiction and his continued struggle to remain sober. Logan and Rissa had great chemistry together, their sex scenes scorching hot and I so enjoyed his alpha attitude and him declaring, &quot;you&#039;re mine&quot; to her *swoon*. Rissa was a strong heroine and gave as good as she got and was not afraid to stand up to Logan. I loved the romantic suspense element in this book and seeing the rest of the gang again. I enjoyed the pace of this story which flowed smoothly and I did not want to stop reading until I reached the end.

A page turner! Love conquer&#039;s all through drugs, deceit, and lust. A well written love story that takes you on an emotional rollercoaster and steamy romance. Highly recommended!

A hot steAmy romance. Logan and Marissa have worked together and ignored all the sexual chemistry between them. Now when Marissa quits the fireworks fly. There are some obstacles to overcome on the way to love.

A page turner! Love conquer&#039;s all through drugs, deceit, and lust. A well written love story that takes you on an emotional rollercoaster and steamy romance. Highly recommended!