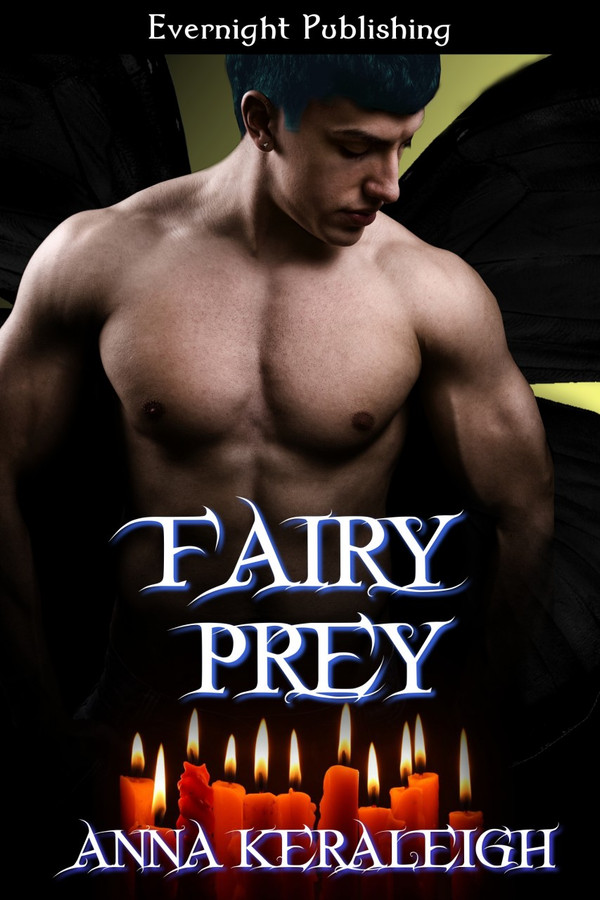 This is not a fairy tale. This is the story of a dominant fairy and his prey.

Morrigan is a survivor, a fighter, and assertive. She chooses her own path in life and refuses to take orders. That is until he came along—a man with blue hair and wings. A fairy that treats her like prey. She’s forced to fight beside him as the fairy-troll war comes to a peak. They must survive twisted Kelpie creatures, fighting in the troll gladiator games, and still discover which of the fairies is a traitor to their own kind.

Prepare for battle and submission.

Morrigan’s eyes went wide and she grabbed Whisper’s outstretched hand. Their palms touched, fingers clasped, and she pulled as hard as she could. His torso was over the ledge. Whisper’s legs hung down, and the kelpie grabbed hold of his ankle. He kicked out but missed.

Morrigan threw her knife, sliced the thing’s cheek, and jammed her hands around Whisper’s leg. “He’s mine!” She tugged. The creature let go, fell to the rocky cave floor, and began screeching.

Whisper pulled himself to the edge of the dimly lit cavern.

Morrigan jerked back as the creature lunged upward. It couldn’t reach them and the sexy woman shifted into a man, muscles, six-pack and big cock all on display for her eyes. It waved to her and grabbed the thick cock that jutted between its legs. “Fuck you! I am not that hard up!” she yelled. The thing tried one more lunge before jumping back into the water.

Whisper grabbed her arm, pulling her toward him, and planting a kiss on her forehead. “I am yours.”

She hadn’t meant it like that or had she? Her mind and heart were still torn on that one. Morrigan gazed up at the ceiling, praying for some sort of hole or tunnel that they could crawl out of. Her lips parted, and her eyes went wide. It was, literally, a ceiling of rock and a small crack between the rocks that let in the smallest filtering of light. It led to the surface. She could see a piece of the sky and a few stars. How did they come this close to the surface when they dove so deep to begin with? Maybe that thing was trying to drown them first.

“If we break that open, the ceiling will cave in,” Whisper said.

Morrigan’s hope faded. He was right. There wasn’t much holding that ceiling up, and when it did go, the whole place would be crumbled and they’d be back on the main floor with the kelpie. “Damn it.” She was just about out of optimism.

“We will survive,” Whisper said without an ounce of sarcasm.

“Can you see the future now? Some crystal ball I don’t know about?” She sat back against the rock wall.

“My balls are not crystal.” He grinned, showing some fang. “And we will not die because I have yet to get you in my bed. Tied down...” He leaned closer. “Legs spread, breasts bared to my eyes with small wooden clamps squeezing them.”

Morrigan blanched. She swallowed hard and stared at Whisper. He really was a dominant. “I am not subservient.” She tried for tough, unflinching, but it came out rather hoarse.

“You are my submissive.” He closed the gap between them. His mouth on her created a wild erotic ride as he ravaged her lips. His tongue and fangs gave the kiss more depth, and by the time he pulled away, she was creaming between her legs and clenching her thighs together. She knew just how good the sex with him could be. Her cheeks grew hot as she thought of their first time, fucking on the battlefield like animals. What would it be like if Whisper took his time? Morrigan bit her bottom lip. She could only imagine the heights he could bring her. He leaned closer, this time his lips lingering on her neck. He suckled her tanned skin, and she felt the sting of his fangs sliding across her delicate flesh.

“What’s with the fangs?”

This book really wowed me. Also add in these hot sex scenes and I will never look at candles the same way again. Wax play has a completely new meaning! Fairy Prey was an adventure that is a must read. Now I’m off to find the other books in this fairy series.